A sluggish and unassuming shark that swam in shallow waters 165 million years ago was the ancestor of such iconic creatures as great white sharks and the megalodon.

The flat-bodied ancestor has finally been connected to its famous descendants through a unique tooth structure shared only by these mackerel sharks.

Unlike other sharks, these have teeth whose insides — beneath the surface enamel — are entirely made of a bone-like dentine normally found only in the roots of teeth. 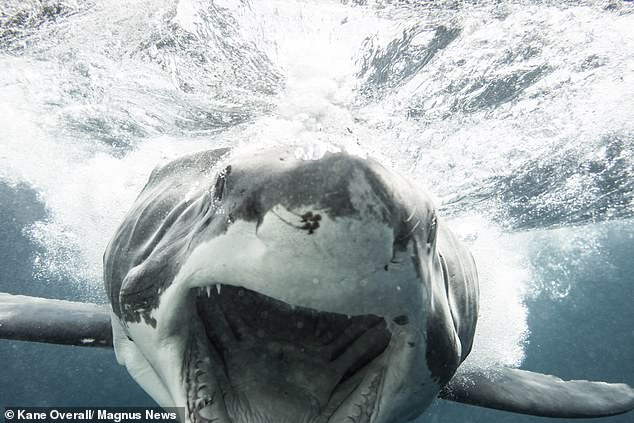 A sluggish and unassuming shark that swam in shallow waters 165 million years ago was the ancestor of such iconic creatures as great white sharks, pictured, and megalodon

WHAT IS DIFFERENT ABOUT MACKEREL SHARK TEETH?

In most sharks, the crown of the tooth is mainly comprised of compact orthodentine.

This is the same material found inside human teeth.

The roots of shark teeth tend to be made of a more spongy, bone-like material, which is called osteodentine.

In some sharks, osteodentine can appear in the crown of the teeth, too.

However, mackerel shark teeth have no orthodentine, having replaced it all with osteodentine.

This structure is unique to these sharks — which include great whites, mako sharks and the extinct behemoth megalodon — and their ancestors.

Palaeontologist Patrick Jambura of the University of Vienna and his colleagues used high-resolution scanning technology to examine the compositions of the teeth of both great whites and other related species, which are known as mackerel sharks.

These animals — which include the fastest-swimming mako shark and the extinct megalodon, one of the largest predators to have ever lived — have unusually structured teeth, researchers found.

Like humans, sharks possess teeth made up of two types of material, with a hard outer shell of hypermineralised tissue — we have enamel, sharks have enameloid — and a core of bony tissue called dentine, which itself come in two forms.

Of these, human teeth contain only the compact orthodentine, which in sharks is confined to the crown of the tooth, above the gums.

In contrast, osteodentine is spongy in appearance, resembling the inside of bone.

In sharks, osteodentine typically appears in the roots of the teeth, attaching each one to the jaw, although in some cases osteodentine is also known to appear in the crown as well.

In the mackerel sharks, however, the researchers found that the osteodentine had extended up from the root of each tooth into the crown and completely replaced any orthodentine — a most peculiar configuration.

‘Orthodentine is known for almost all vertebrates — from fish to mammals, including all modern sharks, except for the mackerel sharks,’ said Mr Jambura. 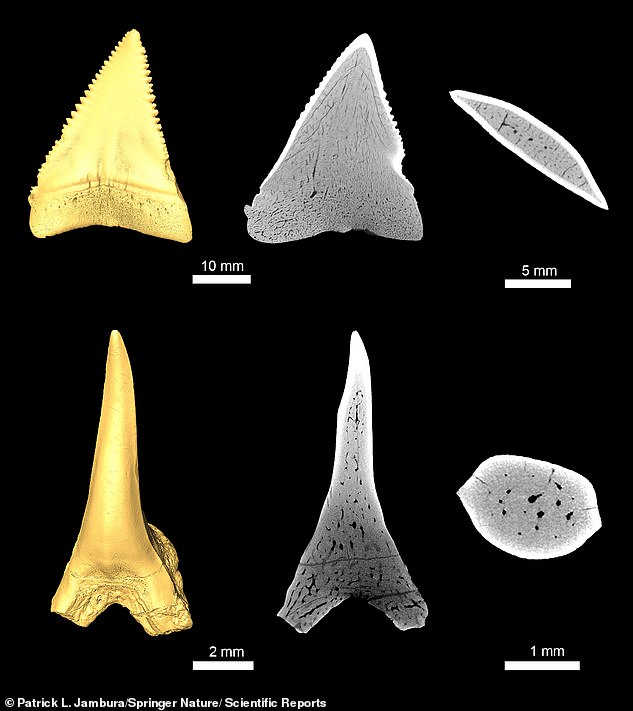 Palaeontologist Patrick Jambura of the University of Vienna and his colleagues used high-resolution scanning technology to examine the compositions of the teeth of both great whites and other related species, which are known as mackerel sharks 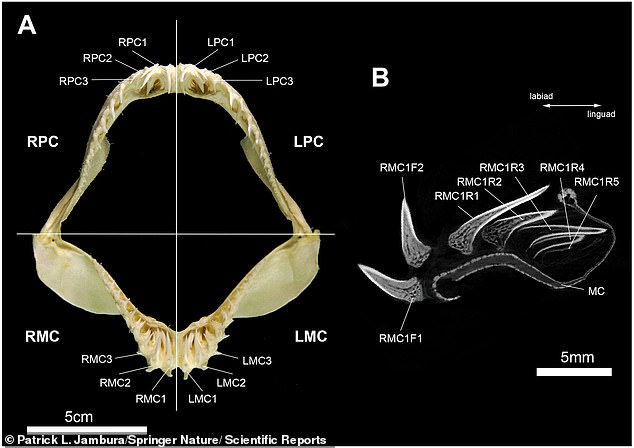 These animals — which include the fastest-swimming Mako shark; the extinct Megalodon, one of the largest predators to have ever lived; and the crocodile shark, whose jaw is pictured — have unusually structured teeth, researchers found

Alongside members of the mackerel sharks, researchers also examined the teeth of a small fossil shark known as Palaeocarcharias stromeri, which is known to have lived as far back as 165 million years ago, during the middle of the Jurassic period.

Palaeocarcharias has long been a mystery to palaeontologists.

While the shape of its body resembles that of modern day carpet shark — so named for the ornate patterns often found on their backs — it had fang-like teeth that are much more similar to those of the mackerel sharks, like great whites or megalodon.

Despite this, Palaeocarcharias appears to have little in common with today’s mackerel sharks, being a three-feet-long and sluggish shark that would have lived near the seafloor and likely hunted small fish in shallow waters.

Alongside mackerel sharks, researchers also examined the teeth of a small fossil shark known as Palaeocarcharias stromeri, pictured, which is known to have lived as far back as 165 million years ago, during the middle of the Jurassic period

When Mr Jambura and colleagues analysed the shark’s fossil teeth, however, they found the osteodentine-dominated tooth structure found only in mackerel sharks.

This shared tooth structure strongly suggests that the relatively modest Jurassic-age animal gave rise to the most iconic sharks like the terrifying great white or the extinct giant that was megalodon.

‘The discovery of this unique tooth structure in the fossil shark Palaeocarcharias strongly indicates that we found the oldest known ancestor of the great white shark,’ said Mr Jambura.

‘Even this charismatic giant shark started on a shoestring.’

WHAT IS THE MEGALODON?

The megalodon, meaning big-tooth, lived between 15.9 and 2.6 million years ago.

C. megalodon is considered to be one of the largest and most powerful predators in vertebrate history and fossil remains suggest it grew to 59 ft (18 metres) long.

It’s thought the monster looked like a stockier version of today’s much feared great white shark and weighed up to 100 tons.

Megalodon is known from fossilized vertebrae and teeth, which are triangular and measure almost eight inches (20cm) in diagonal length.

The Megalodon’s colossal mouth would have produced a but force of 10.8 to 18.2 tons.

The ancient shark has been described as a super predator, because it could swim at high speeds and kill a wide variety of prey such as sea turtles and whales, quickly in its strong jaws.