Global smartphone shipments have fallen by 16.8 percent due to worldwide lockdowns to stop the spread of coronavirus, reports analyst firm Omdia.

Phone vendors such as Apple, Samsung and Huawei are feeling the pinch from production shutdowns at factories, product launch delays and stunted consumer demand.

IDC, another independent analyst firm, has said that this quarter’s global decline in smartphone shipments is the biggest ever.

Apple’s budget-friendly iPhone SE (pictured), which launched last month, may have saved the company from a more dramatic decline in shipments

Omdia said the most severe impact on smartphone shipments was the shutdown of production and supply chain facilities in China early in the first quarter.

This shutdown affected smartphone makers based outside of the country, including Apple, which pays Chinese company Foxconn to construct its iPhones and other devices.

However, signs point to economic activity in China ramping up as the spread of the virus slows in the country, according to Omdia.

Smartphone makers also had to call of their plans to launch new products at the Mobile World Congress, one of the world’s biggest consumer technology tradeshows.

This year’s MWC event was due to take place in Barcelona at the end of February before companies attending dropped out one by one due to safety concerns – until it was eventually cancelled by the organisers. 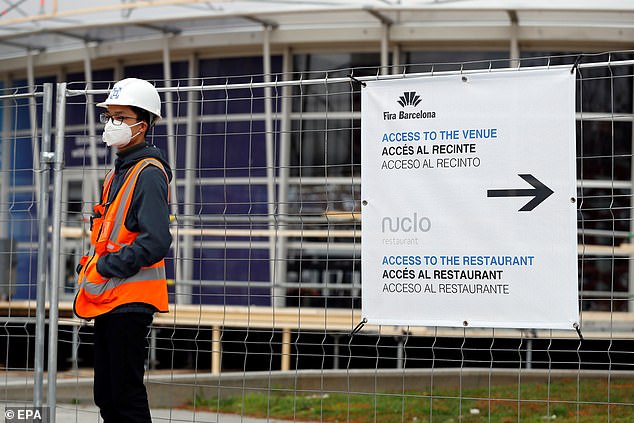 An operator at the entry of the Fira Barcelona Montjuic centre in Barcelona, Catalonia, where the Mobile World Congress (MWC) was supposed to take place from 24 to 27 February

Other reasons for a global decline in the market are restricted access to bricks and mortar shops during lockdowns and an economic downturn that means consumers are less able to shell out on a new phone.

‘Early in the first quarter, the smartphone market was sent reeling by the shutdown of production at facilities in China, which halted the manufacturing of phones and their key components,’ said Jusy Hong, smartphone research and analysis director at Omdia.

‘While concerns about this situation have been alleviated, the smartphone brands also faced new challenges, including disrupted launch schedules for new phones.

‘Even more troubling for smartphone makers is a major decline in global demand due to government lockdown mandates.’

Omdia revealed that Samsung was the top smartphone maker in the first quarter of this year with 58.9 million shipments and 21 per cent of the market.

All three of the top sellers for the quarter – Samsung, Huawei and Apple – saw reduced shipments compared with Q1 2019 (drops of 17 per cent, 17.1 per cent and 12 per cent, respectively). 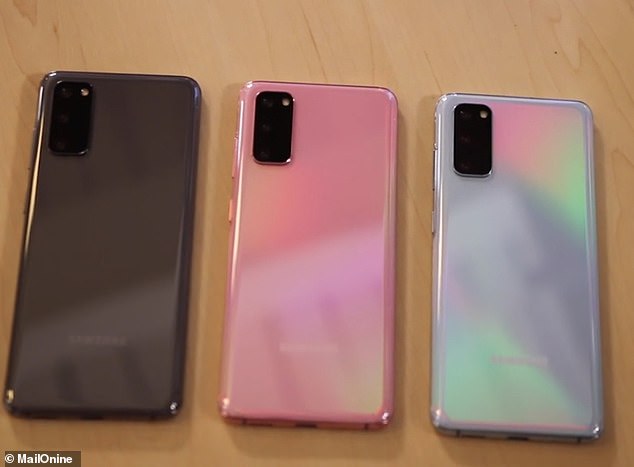 The Galaxy S20 (pictured) and Samsung’s other big offering of the year, the foldable Galaxy Z Flip, were launched just before the lockdown hit Britain

Of the top 10 sellers, LG and Motorola had the most dramatic falls in shipments over the year, while China-based manufacturers Xiaomi and Tecno experienced the smallest drops (8.2 per cent and 7.6 per cent).

Despite finally launching its rebooted Razr flip-phone with a foldable display, the publicity surrounding the high-profile device was not enough, Omdia said.

South Korean manufacturer LG, meanwhile is also struggling with its mobile division, seeing smartphone shipments fall 37.4 per cent from 8.6 million units a year ago to 5.4 million this year.

Bucking the trend was Chinese manufacturer Realme, which was the only seller in Q1 to achieve growth over the year.

Omdia expects the global smartphone market to recover in the second half of the year as lockdowns are likely to lift – however, there will be a far reduced demand than what big sellers like Apple and Samsung are used to.

‘Although handsets can be produced at nearly normal levels, the markets for these handsets are mostly in some state of shutdown,’ Hong said.

‘Some countries have made more progress in dealing with the outbreak, while others are still in the midst of fighting the pandemic, and still others won’t feel the full effects of the pandemic until later in the year.’

In the US, only the last few weeks of the quarter were impacted by stay-at-home orders, Omdia said, due to more relaxed federal and state government restrictions.

This meant US consumer behaviour had remained unrestricted until then and that the country as a whole contributed less to the global decline.

According to the IDC report, which described Q1 2020 as the largest annual smartphone shipment decline ever, the largest regional decline for the quarter was in China.

IDC said in a blog post on Friday that smartphone shipments to China dropped 20.3 per cent over the year.

‘Since China constitutes almost a quarter of worldwide shipments, this had a huge impact on the overall market,’ IDC said.

IDC’s preliminary data put the global smartphone shipment decline as slightly lower than Omdia, at 11.7 per cent, but both had the same top three smartphone suppliers ranked by shipments.

Apple itself announced this week that iPhone sales dropped 7 per cent over the year, with profits also declining 2 per cent to $11.2 billion.

Despite the decline, Apple’s sales were far better than analysts had feared in part due to the release of its more budget-friendly iPhone SE last month.

Rival Samsung, which managed to stage its launch event for its new Galaxy S20 and foldable Galaxy Z Flip smartphones before lockdowns took hold in the UK and US, also reported declines in smartphone shipments due to COVID-19 despite overall profits.

‘In the second quarter, the company expects demand to contract owing to fading effects of launches of flagship smartphones and weak consumer sentiment due to COVID-19,’ Samsung said in a blog post this week.

The following data shows the top 10 smartphone makers and their decline in shipments registered in the first quarter of 2020, compared to this time last year.

Unit shipments are given in millions. Companies are ranked by shipments.

Realme was the only seller to see a rise in shipments over the year.