An enormous cloud of dust from the Sahara desert is being blown across the Atlantic Ocean and could reach the southern United States in a matter of days.

According to satellite imagery, the large and long cloud of dusts has already travelled far off the coast of west Africa, and climate scientists expect it to hit Florida as early as this weekend.

By the middle of next week, it could travel as far as Louisiana and Texas, before finally dispersing. 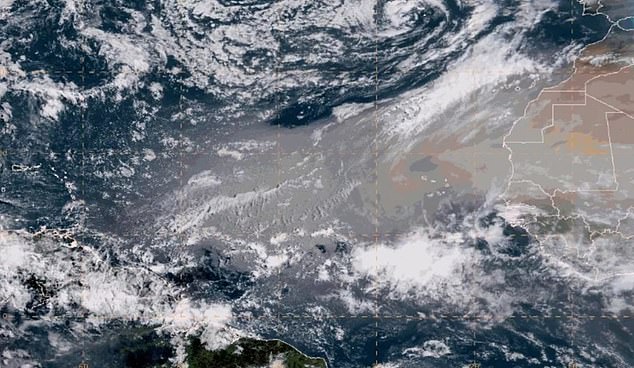 The cloud likely formed in recent weeks as strong updrafts pushed sandy surface winds blowing across the desert higher into the atmosphere.

Experts call this higher region the Saharan Air Layer, which is between 5,000 and 20,000 feet above ground level, and is typically most active in the summer months, especially June and July, according to a report in Newsweek.

Meteorologists expect the effects of the dust cloud to be comparatively mild by the time it reaches the US.

In most places, the cloud will give the sky a hazier than normal appearance, but it could cause issues for people with respiratory conditions or allergies, including some difficulty or discomfort breathing.

Experts recommend that anyone with a respiratory condition or allergies consider staying indoors as much as possible as a precaution.

The dust clouds bring with them some surprising benefits, including making it less likely that tropical storms or hurricanes will form. 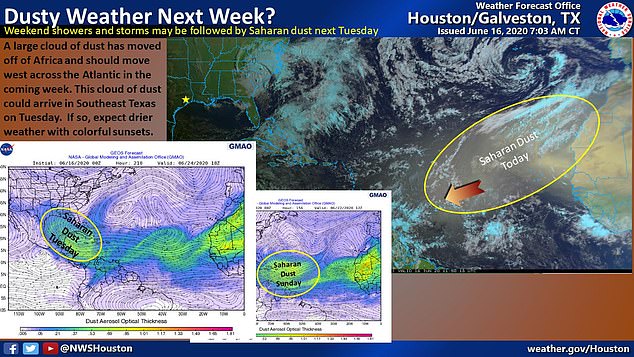 ‘Saharan dust changes the regional climate by reflecting and absorbing the sunlight, which decreases the sea surface temperature,’ Texas A&M’s Bowen Pan said in an interview with Newsweek.

‘[This] decreases the energy supply to the storms. Additionally, dust also stabilizes the atmosphere.’

According to Bowen the dust can also be a benefit to local plant life when it settles on the ground and mixes minerals and chemicals from a new part of the world into the soil.

Past research has shown soil as far away as the Amazon rainforest has been enriched by dust particles originally blown up from the Sahara.

While it’s rare for Saharan dust clouds to travel that far, they do form on a semi-regular basis each year.

In February, thick dust clouds from the Sahara swept across the Canary Island, forcing the country’s main airport to close while the local government declared a state of emergency.