US scientists have produced their most precise date yet for the landslide that shaped the iconic canyon running through what is now Zion National Park.

The colossal rock avalanche occurred about 4,800 years ago, they say, based on a study of some of its boulders.

The researchers have also re-examined the details of the event.

They find the slide probably contained some 286 million cubic metres of debris – enough to cover New York’s Central Park to a depth of about 80m.

As sediments filled this lake, they gave the valley its distinctive flat floor, which today makes it very easy to cross on foot. 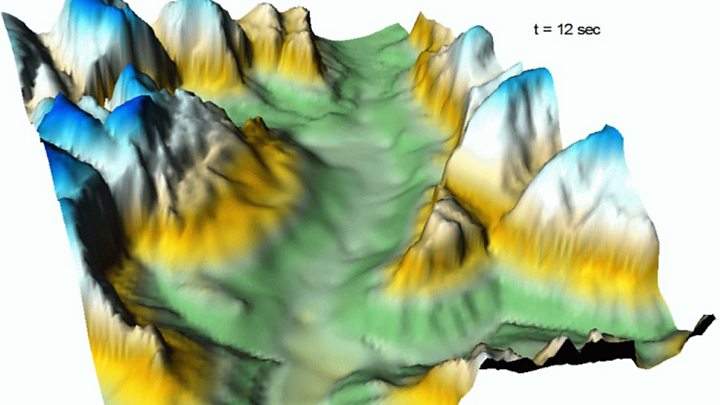 The lake is gone; the relentless process of erosion eventually broke it, and the river is again cutting downwards.

And, as a consequence, roughly 45% of the original landslide deposits have been removed as well.

Jeff Moore, from the University of Utah, and colleagues report their investigations in the Geological Society of America’s journal GSA Today.

The team was able to date the massive slip by examining the amount of beryllium-10 in several boulders.

This radioisotope is produced when energetic space particles raining down from the sky hit the oxygen and silicon atoms in quartz minerals.

The longer a rock surface is exposed, the greater the build-up of beryllium-10.

Previous dating work, using less direct methods, put the age of the slide at somewhere between 3,900 and 7,900 years ago.

“Nine out of 12 of our samples gave an age that was very tightly consistent with this mean age of about 4,800 years,” Dr Moore told BBC News. 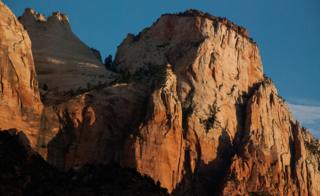 But just as interesting as the dating are the new estimates surrounding the dynamics of the slide.

The event initiated in the cliff face of The Sentinel, a huge tower of rock on the western side of Zion Canyon.

The Utah team’s simulations of how the flow progressed match the likely valley topography before the failure with the eventual distribution of deposits.

This gives the group confidence in their numbers – which are pretty stunning.

“It’s a spectacular volume of material. You get, essentially, one of Zion’s most massive cliffs collapsing, running across the canyon in 20 seconds with peak velocities of 90 metres per second (200mph),” said Dr Moore.

It is still not clear from the investigations what caused the rock avalanche. There is insufficient data on palaeo-earthquakes in the area to make a statement about a seismic trigger. It remains a possibility, but so too does a simple internal failure of the rock.

And while there is evidence for other rock avalanches in the canyon, Dr Moore says a repeat event is not something the National Parks Service nor tourists should be unduly worried about.

Just marvel at the spectacle, he urges.

“People when they go there, they look up to the huge Navajo sandstone cliffs, and I think it’s a little more subtle to look down at our feet and wonder why this canyon is so accessible, why the valley floor is so flat?

“Studying landslides for my job, the story I tell is often connected to a lot of gloom and doom. But this is a case where a spectacular landslide did something in a spectacular setting, and it’s an opportunity to reach out to people and tell them something new that they might not otherwise have known about landslides.

“I hope it is an enriching tale on the history of Zion.”

Now read about Jeff Moore’s work on the rock arches of the southwestern US.