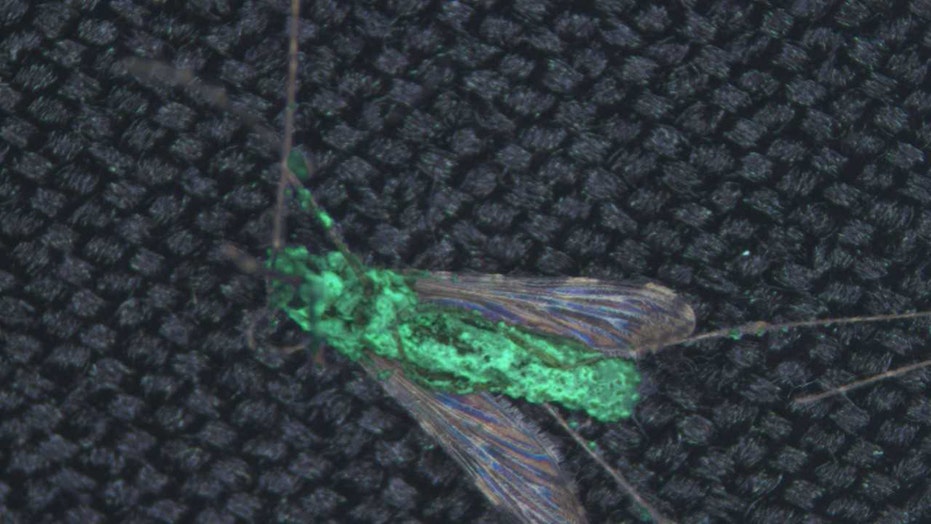 A new weapon in the war against malaria-carrying mosquitoes has arrived just in time for summer.

Researchers from the University of Maryland and the Research Institute of Health Sciences in Burkina Faso have figured out a way to genetically alter a fungus to produce deadly spider venom that kills mosquitoes dead. The fungus, known as Metarhizium pinghaense, which is already deadly to mosquitoes even without the added venom, works so well that in one trial it nearly killed off an entire population of the pest in 45 days. 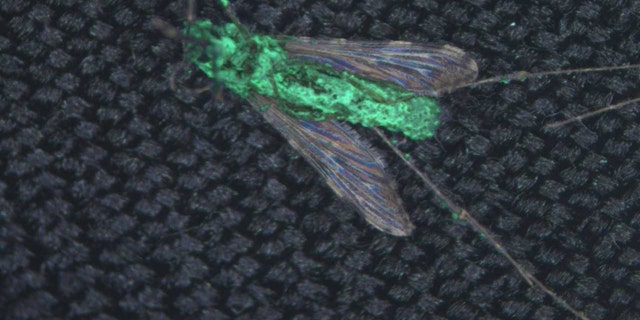 An Anopheles gambiae mosquito with our transgenic fungus emerging from its body after death. This is a merged version of a natural light image and a green fluorescent image. (Credit: Brian Lovett)

“We are using a gene encoding a single toxin, one of the many toxins in spider venom,” Dr. Raymond St. Leger of UMD Entomology told Fox News. “The toxin has been thoroughly characterized by our Australian collaborator Glenn King and approved for use as an insecticide by the EPA, so this toxin has been confirmed to be safe for everything but insects.”

The spider venom used to kill the disease-ridden bloodsuckers is the same kind produced by the Australian Blue Mountains funnel-web spider, one of the most dangerous arachnids in existence.

The fungus has been genetically engineered to produce the toxin and, according to Dr. Leger, it works like a contact insecticide due to its ability to penetrate the skin of the insect. Leger and his team tested the fungus in West Africa, in a screen-enclosed mock village known as a “MosquitoSphere.” 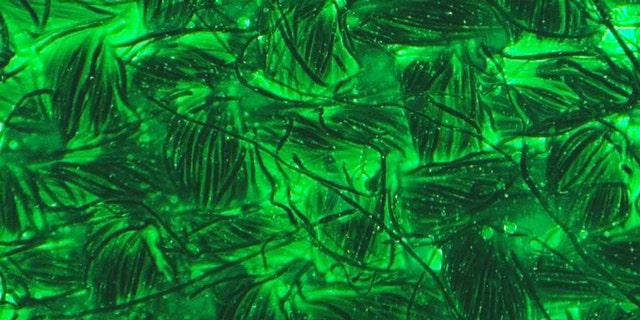 Green fluorescent spores in sesame oil on black cotton cloth (this is our treatment in our experiments). The little green flecks are spores mosquitoes pick up on contact. (Cerdit: Brian Lovett)

“We apply the fungal spores to a cotton sheet hung up in our huts, a mosquito touching the sheet picks up the same spores; these germinate on the skin and send down tubes (technically called hyphae) that penetrate into the blood of the mosquito,” Leger explained. “We have engineered the fungus to make a toxin, but in such a way that the toxin is only made when the fungus is in the blood of the mosquito.”

The hyphae, acting as the “spider fangs,” deposits the toxin in the blood which then kills the mosquito rapidly. Leger and his team are currently exploring ways to make the fungus cheap and easily available. 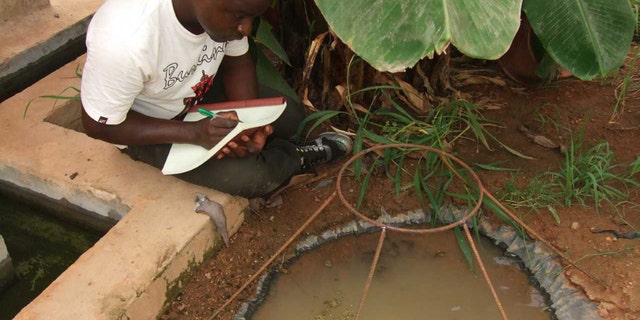 It could be a great help in sub-Saharan Africa, where the most malaria-related deaths occur. The disease is also on the rise in Southeast Asia, the Eastern Mediterranean, and North and South America.  According to the World Health Organization, 219 million people were infected in 2017, and 435,000 died of the disease.

Some critics have noted that genetically engineering a fungus is a bad idea, as it could have unpredictable ripple effects in nature. Creatures such as bats and bees could be negatively affected, they argue.

Swatting these criticisms away, Dr. Leger responds: “The fungus will be used to target mosquitoes that come into homes [and] these don’t really have many friends. We have tested the fungus to confirm it doesn’t harm beneficial insects like bees. The fungus is applied stuck to a sheet providing containment, and has large spores so it is not wind dispersed, [and even] if it does get outdoors it does not survive long in the sunlight, so we estimate negligible ripple effects in the environment.”