A pair of same-sex penguins, Sphen and Magic, have decided to become parents again, by fostering another egg.

The couple successfully hatched their first chick at Sydney’s Sea Life Aquarium in October 2018, and have been great parents to Spengic since.

When another couple in the zoo were recently spotted struggling to incubate two eggs at once by the keepers the decision was made to transfer one of the eggs to the doting foster parents.

Patiently waiting 68 days for Spengic to hatch into the world, supervisors at the Aquarium have full confidence the pair will try their best to safely hatch the second chick. 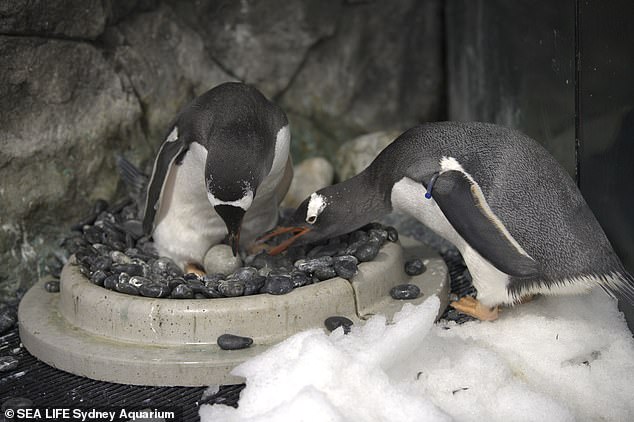 Sphen and Magic, with the new egg.  The couple successfully hatched their first chick at Sydney’s Sea Life Aquarium in October 2018, and have been great parents to Spengic since.

Penguin supervisor Tish Hannan told Metro the couple ‘have the neatest and largest nest in the colony.’

Adding: ‘When we noticed that another couple were struggling to incubate two eggs at the same time, we made the decision to foster the second egg to the power couple of the colony.’

Sphen and Magic’s relationship caught the eye of their handlers after they became inseparable and were constantly swimming or waddling along together.

The couple became internet famous after featuring on the Netflix show Atypical.

They took it in turns to incubate baby Sphengic and seem to be doing the same for the new egg. 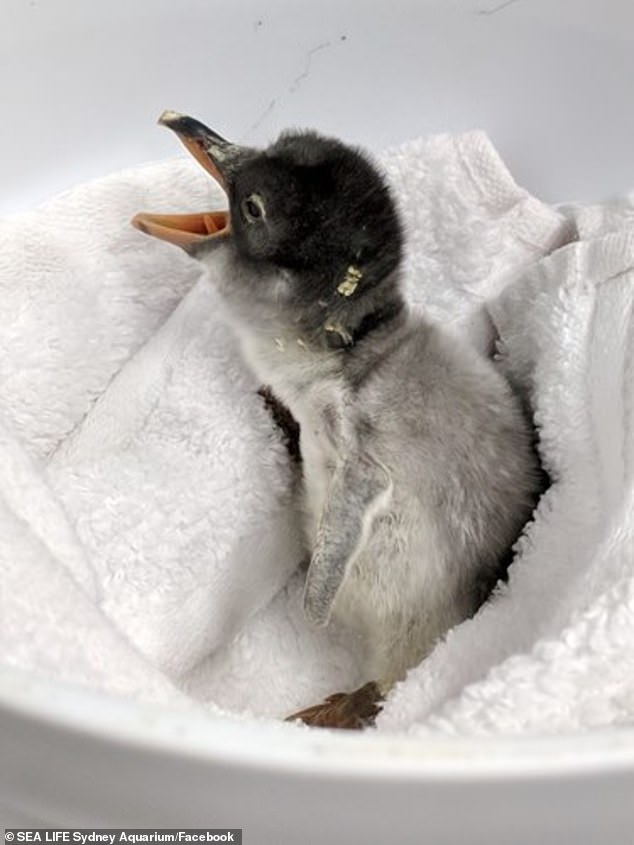 Keepers have not yet been able to confirm whether the egg is fertile, so it is unknown whether it will hatch in the next few weeks.

Ms Hannan added: ‘Baby Sphengic… had an excellent start to life under their care and while she’s still a bundle of energy and very loud, she’s matured nicely but still quite unsure as to what all the adults are doing this breeding season.’

Same-sex penguin couples have previously been known to rear younglings at zoos including in Berlin and New York. 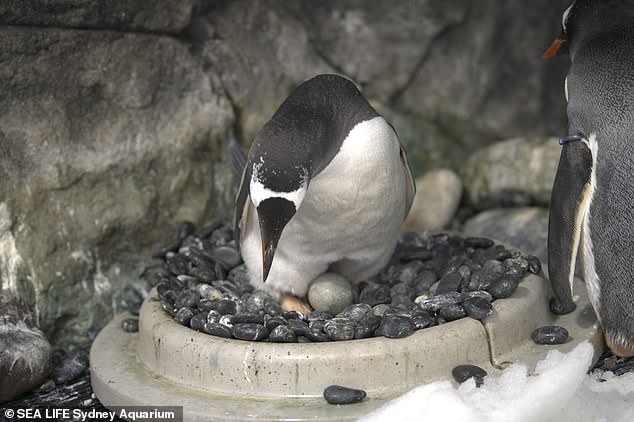 Eight of the 14 residents of the Dingle, Republic of Ireland, Oceanworld Aquarium’s penguin enclosure have a gay or lesbian partner.

In a bizarre coincidence, keepers at the County Kerry aquarium say the number of same-sex couples has rocketed since Ireland legalised gay marriage in 2015.

Pairs of female penguins have even been known to raise a chick together after producing one with a temporary male partner, the Irish Mirror reported. 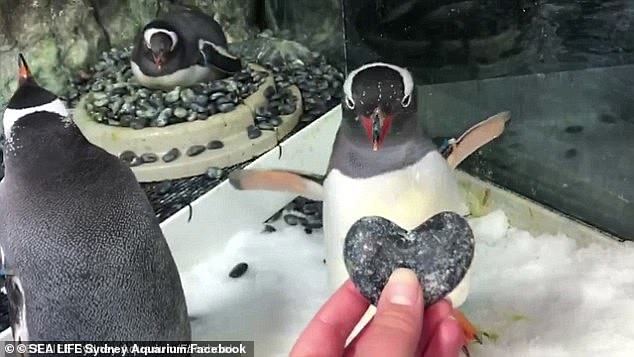 The same-sex couple, collectively known as Sphengic, had an instant connection as they developed a strong bond just before breeding season 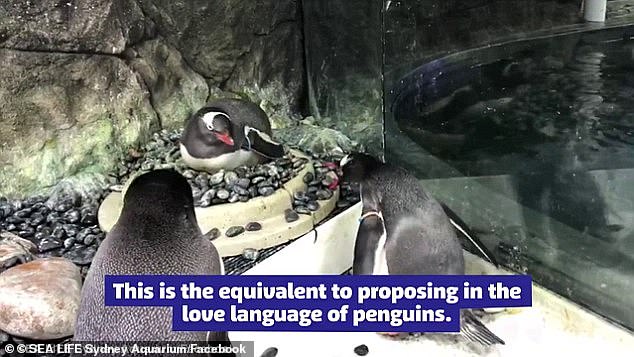 Sphen is seen ‘proposing’ to Magic with a stone, the love language of penguins

Manager Louise Overy told the newspaper: ‘We have two homosexual pairs and two lesbian ones.

‘You cannot tell a male penguin from a female by their sexual organs so the only way we know is when we see them mating and not producing chicks.’

The four gay couples now at the aquarium mark an increase from just one – called Penelope and Misty – five years ago, she said.

The prospective partners will ‘woo each other’ with stones which are used to construct a nest, she added.

Unlike many mammal species, male and female penguins take on the same parenting roles, and share parental duties 50-50. 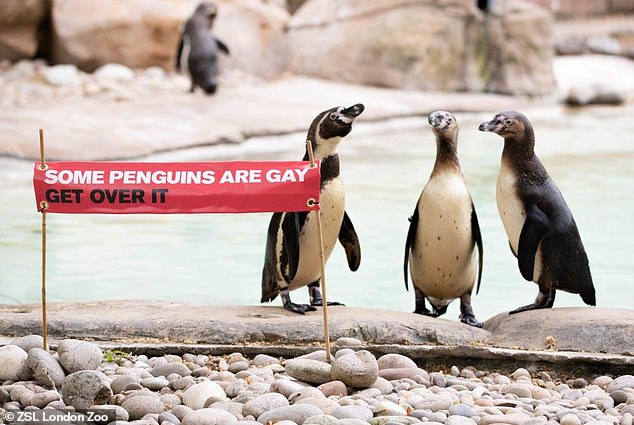 In September penguins at ZSL London Zoo were photographed with an LGBTQ+ Pride banner to celebrate the annual parade.  The enclosure – which recreates a South American beach landscape – is home to several same-sex couples, including Humboldt penguins Ronnie and Reggie

Homosexuality in nature appears counter-intuitive but is observed in a range of species around the world.

There has yet to be an accepted explanation based on neurological, chemical or behavioural factors to explain why some animals are homosexual and some or heterosexual.

Some scientists say it may be due to exposure to testosterone levels in the womb, although this remains a hotly debated topic which has yet to be proved.

In a book titled: ‘Homosexual Behaviour in Animals: An Evolutionary Perspective’, the author, UCL professor Dr Volker Sommer, writes: ‘Within a select number of species, homosexual activity is widespread and occurs at levels that approach or sometimes even surpass heterosexual activity.’

Homosexual behaviour has been observed in many animals, including: macaques, dwarf chimpanzees, dolphins, orcas and humans.

Some studies claim homosexuality may be a common as being found in up to 95 per cent of all animal species.

There are two principle schools of thought when it comes to the prevalence of homosexuality in nature.

One theory states that homosexuality in animals doesn’t need an explanation, with animals being homosexual just as naturally as they are heterosexual.

It appears irrational for it to survive as a trait as it hinders the ability to procreate directly, but many speculate it allows individuals to ensure their genetic material is passed down the generations indirectly as they are able to look after members of their family with offspring.

For example, helping nurture the offspring of a sister.

Similar behaviour dedicated to the ‘greater good’ of a large group have been seen in various species.

For example, in familial wolf packs only one pair of animals breeds – the alpha and the beta. The other animals ensure the protection, feeding and nurturing of the litter.

This allows their genetic material to pass indirectly to the next generation through their sister, brother, mother etc or whatever the relationship may be.

The same school of though applies to animals which have exceeded their reproductive age.

For example, female elephants which are now too old to have offspring.

They still play a crucial role in the protection of the young a the matriarch leads the group to spots of food, water and chases of would-be predators.

These actions ensure the survival of the young and vulnerable members of her family, again helping ensure her genetic material is passed down through the generations indirectly.

A similar concept can be applied to homosexuality, some experts claim.

Without the ability to reproduce directly, they are able to expend energy looking after the offspring of their family members.

Another theory states that homosexual behaviours aid in the successful passing on of genes in the long-term as young animals ‘practice’ mating techniques and ways of attracting a member of the opposite sex.

It continues to be found in more species but the level of homosexuality in individual species is not well enough studied to be able to determine if homosexuality is becoming increasingly common.