Future quantum computers may have to be built UNDERGROUND to protect them from cosmic rays and other natural radiation that can hinder their performance, study claims

Quantum computers are sensitive to cosmic rays and other forms of radiation, a new study found, suggesting future machines may have to be built underground.

The practicality of quantum computing hangs on the integrity of the quantum bit, or qubit, and how long it can operate before information is lost, researchers explained.

A team from MIT and Pacific Northwest National Laboratory found that the performance of a qubit will soon hit a wall, as cosmic rays and even trace radiation in concrete can limit their operational lifespan to just a few milliseconds.

Quantum computers could be dizzyingly fast once fully developed and used to process incredibly complex problems beyond the capability of the fastest supercomputers in use today.

The longest lasting qubits are 200 microseconds – there are a million microseconds in a second – but the rate is increasing and the limit could be hit in a few years.

In a paper published in Nature, the US team say that, to overcome this barrier, scientists need to find a way to shield qubits from radiation, including by putting them underground. 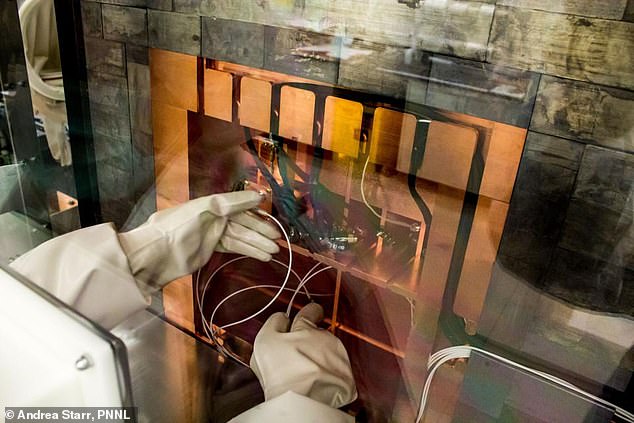 Factors that end the operational life of a qubit are known as decoherence mechanisms and a number of factors can cause them including heat and electricity.

‘These decoherence mechanisms are like an onion, and we’ve been peeling back the layers for past 20 years,’ says William Oliver, associate professor of electrical engineering and computer science and Lincoln Laboratory Fellow at MIT.

‘But there’s another layer that left unabated is going to limit us in a couple years, which is environmental radiation,’ he added.

‘This is an exciting result, because it motivates us to think of other ways to design qubits to get around this problem.’

The paper’s lead author is Antti Vepsäläinen, a postdoc in MIT’s Research Laboratory of Electronics, who said it was fascinating how sensitive they are to weak radiation.

US TO SPEND $625 MILLION ON AI AND QUANTUM COMPUTER RESEARCH

The US will spend $625 million over the next five years on centres to research AI and quantum computing.

Another $340 million will be given by the private sector and academic institutions, bringing the total planned investment close to $1 billion.

‘These institutes will be world-class hubs for accelerating American innovation and building the 21st century American workforce,” said US CTO Michael Kratsios.

The US invests more than $500 million annually in AI research and is building on that effort to “advance American competitiveness,” National Science Foundation director Sethuraman Panchanathan said.

A Google official warned in January that in a technological race to the future, China could pour “enormous resources” into developing super-computers with quantum technology.

US officials and scientists in July began laying the groundwork for a more secure “virtually unhackable” internet based on quantum computing technology.

‘Understanding these effects in our devices can also be helpful in other applications such as superconducting sensors used in astronomy,’ Vepsäläinen says.

They comprise multitudes of paired electrons, known as Cooper pairs, that flow through the circuit without resistance and work together to maintain the qubit’s tenuous superposition state.

If the circuit is heated or otherwise disrupted, electron pairs can split up into ‘quasiparticles,’ causing decoherence in the qubit that limits its operation.

There are many sources of decoherence that could destabilise a qubit, the team explained, including a changing magnetic field or thermal energy.

Scientists have long suspected that very low levels of radiation may have a similar destabilising effect in qubits but this is the first study to prove it.

‘In the last five years, the quality of superconducting qubits has become much better, and now we’re within a factor of 10 of where the effects of radiation are going to matter,’ adds David Kim, a technical staff member at MIT Lincoln Laboratotry.

The team, working with collaborators at Lincoln Laboratory and PNNL, first had to design an experiment to calibrate the impact of known levels of radiation on superconducting qubit performance.

They irradiated a foil of high purity copper which produces copper-64 – an unstable isotope – when exposed to high flux neutrons and created two small discs.

They then placed one of the disks next to the superconducting qubits in a dilution refrigerator in Oliver’s lab and measured the impact of the radioactivity on the qubit.

The radioactivity of the second disk was measured at room temperature as a gauge for the levels hitting the qubit.

Based on these measurements, the qubit coherence time would be limited to about 4 milliseconds – which was improved when the radioactive source was removed. 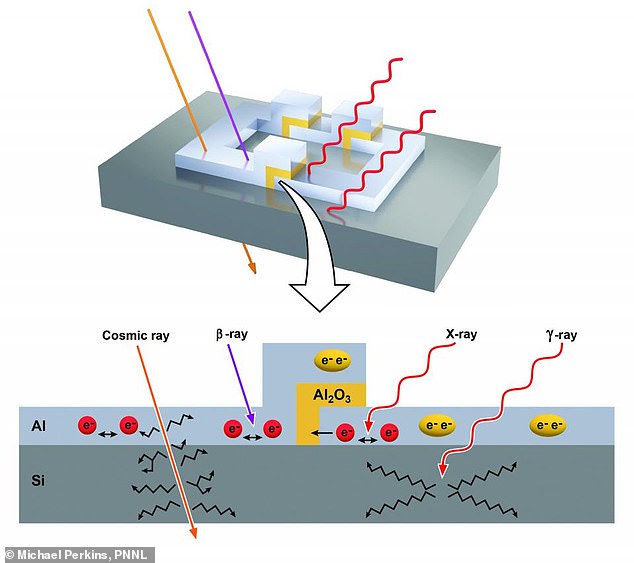 Natural radiation in the form of X-rays, beta rays, cosmic rays and gamma rays can penetrate a superconducting qubit and interfere with quantum coherence 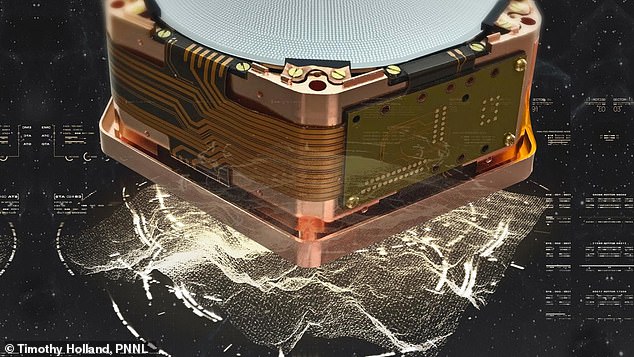 ‘Cosmic ray radiation is hard to get rid of,’ Formaggio says. ‘It’s very penetrating, and goes right through everything like a jet stream.

‘If you go underground, that gets less and less. It’s probably not necessary to build quantum computers deep underground, like neutrino experiments, but maybe deep basement facilities could probably get qubits operating at improved levels.’

Going underground isn’t the only option, and Oliver has ideas for how to design quantum computing devices that still work in the face of background radiation.

‘If we want to build an industry, we’d likely prefer to mitigate the effects of radiation above ground,’ Oliver says.

‘We can think about designing qubits in a way that makes them ‘rad-hard,’ and less sensitive to quasiparticles, or design traps for quasiparticles so that even if they’re constantly being generated by radiation, they can flow away from the qubit.’

‘So it’s definitely not game-over, it’s just the next layer of the onion we need to address,’ he said.

QUANTUM COMPUTING: OPERATING ON THE BASIS OF A CIRCUIT BEING ON AND OFF AT THE SAME TIME

The key to a quantum computer is its ability to operate on the basis of a circuit not only being ‘on’ or ‘off’, but occupying a state that is both ‘on’ and ‘off’ at the same time.

While this may seem strange, it’s down to the laws of quantum mechanics, which govern the behaviour of the particles which make up an atom.

At this micro scale, matter acts in ways that would be impossible at the macro scale of the universe we live in.

Quantum mechanics allows these extremely small particles to exist in multiple states, known as ‘superposition’, until they are either seen or interfered with.

A scanning tunneling microscope shows a quantum bit from a phosphorus atom precisely positioned in silicon. Scientists have discovered how to make the qubits ‘talk to one another

A good analogy is that of a coin spinning in the air. It cannot be said to be either a ‘heads’ or ‘tails’ until it lands.

The heart of modern computing is binary code, which has served computers for decades.

While a classical computer has ‘bits’ made up of zeros and ones, a quantum computer has ‘qubits’ which can take on the value of zero or one, or even both simultaneously.

One of the major stumbling blocks for the development of quantum computers has been demonstrating they can beat classical computers.

Google, IBM, and Intel are among companies competing to achieve this.