A stomach-churning discovery! Fossilised VOMIT found in Utah reveals a banquet of prehistoric amphibians that a predator regurgitated 150 million years ago

Palaeontologists in Utah were in for a surprise when they discovered a fossilised pile of small bones in Utah’s Morrison Formation.

The team from the Utah Geological Survey initially questioned whether they’d discovered a bizarre new species.

However, upon closer inspection they realised that the bones belonged to a range of amphibians that had been consumed by a larger predator, which then vomited them up 150 million years ago.

John Foster, co-author of a study on the findings, said: ‘This fossil gives us a rare glimpse into the interactions of the animals in ancient ecosystems.’ 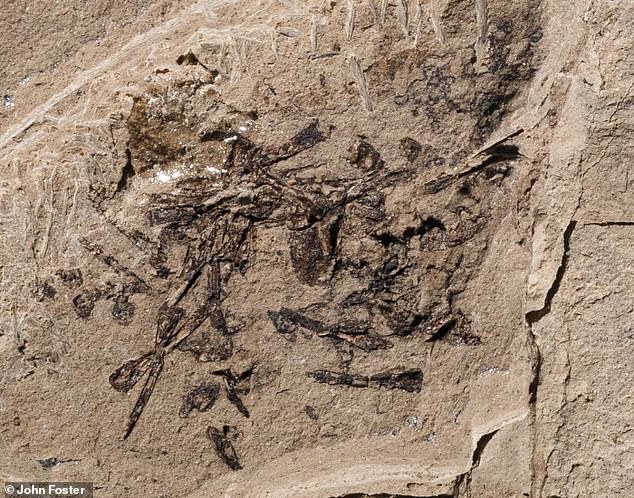 It extends throughout the Western United States and often contains fossils of dinosaurs such as Camarasaurus, Diplodocus, Apatosaurus, Stegosaurus, Allosaurus, and others.

Although the Morrison was deposited in a wide variety of environments, it is the river channels that are most likely to contain dinosaur bones.

The prehistoric vomit was found in the Morrison Formation – a famous site from the Late Jurassic that is known for its dinosaur bones.

The formation extends throughout the Western US and often contains fossils of dinosaurs such as Camarasaurus, Diplodocus, Apatosaurus, Stegosaurus and Allosaurus.

‘Although the Morrison was deposited in a wide variety of environments, it is the river channels that are most likely to contain dinosaur bones,’ explains the National Park Service.

‘Quiet water lake and pond deposits are best for preservation of the small delicate skeletons of salamanders, frogs, lizards, and others.

‘In order for a fossil to form, the body must be buried quickly before weather conditions and scavengers have a chance to scatter or otherwise destroy the bone.’

A chemical analysis of the fossil confirmed that it is a fossiled form of vomit, known as ‘regurgitalite’.

The bones within the vomit included at least one small frog and salamander, with some of the bones measuring just 0.12 inches long.

While the researchers are unclear which predator is behind the vomit, they say the most likely culprit is a bowfin fish.

The bowfin is a type of freshwater ray-finned fish with sharp teeth and a long body, that is still around today.

‘Although we can’t rule out other predators, a bowfin is our current suspect, so to speak,’ said Foster.

However, it is still unknown what killed the species within the vomit.

‘There were three animals that we still have around today, interacting in ways also known today among those animals — prey eaten by predators and predators perhaps chased by other predators,’ Foster added.

‘That itself shows how similar some ancient ecosystems were to places on Earth today.’

The researchers hope to continue exploring the site, in the hopes of finding more prehistoric fossils.

James Kirkland, co-author of the study, said: ‘I was so excited to have found this site, as Upper Jurassic plant localities are so rare.

‘We must now carefully dissect the site in search of more tiny wonders in among the foliage.’