Today, Ford announced a new partnership with McDonald’s to use waste materials from the company’s coffee beans to create new car components.

The new parts will be made from coffee h less energy intensive than traditional plastic parts, and they’ll also be lighter, making each car slightly more energy efficient.

Ford says the chaff-based bioplastics will be used as a plastic replacement for a number of different parts, including new headlamp housings, which will be 20 percent lighter and require 25 percent less energy to mold. 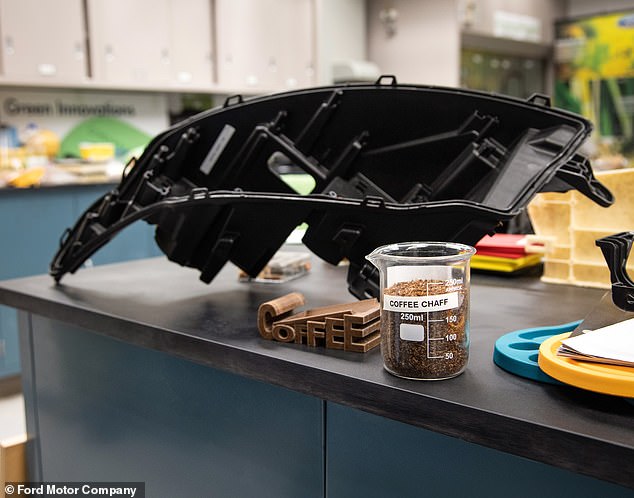 Ford has announced a new partnership with McDonald’s to convert coffee chaff, produced while roasting beans, into bioplastics used in headlamp housings (pictured above)

‘This has been a priority for Ford for over 20 years, and this is an example of jump starting the closed-loop economy, where different industries work together and exchange materials that otherwise would be side or waste products,’ Ford’s Debbie Mielewski said in a statement.

When coffee is hulled and roasted, the last thin membrane of protective material around the bean, called chaff or silver skin, becomes dried out and falls away.

This light and papery byproduct has most commonly used in compost or animal bedding, but in recent years, it’s become a desirable ingredient for bioplastics.

To turn the chaff into bioplastic, it’s first exposed to high heat in a low-oxygen environment, then mixed with other plastics and additives to form pellets.

These pellets can later be reheated and molded into a variety of shapes and sizes.

Chaff produced during the roasting produce for McDonald’s will be shipped to Competitive Green Technologies, a biomaterials company in Ontario that will process the waste product into a raw bioplastic. 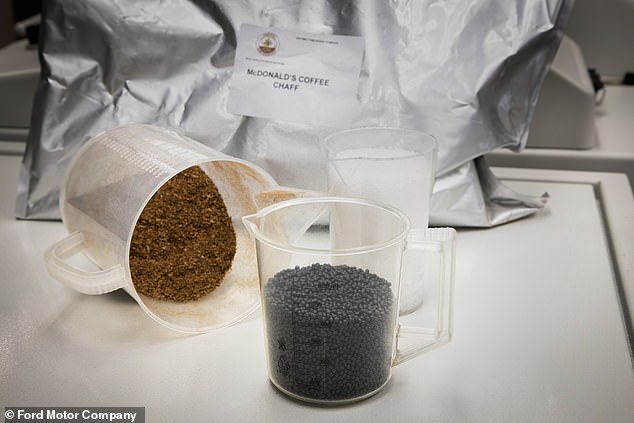 The coffee chaff (above left) is exposed to high heat in a low oxygen environment, then mixed with additives and formed into bioplastic pellets (above right)

That bioplastic will then be shipped to Varroc Lightning Systems, a subcontractor that manufactures headlamps for Ford vehicles.

Varroc will convert the bioplastic material into housings for headlamps that will then be sent to Ford assembly plants for installation in cars. 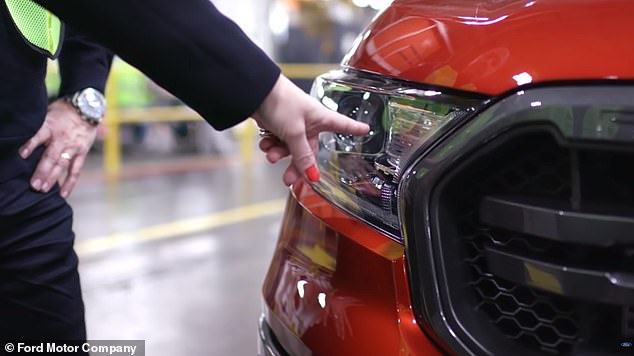 Ford hasn’t said which models will use the chaff-based plastics.

In recent years, Ford has tried to use more recycled material in its cars, including seat cushions made from soy products, gaskets made from old tire rubber, interior console components made from bamboo, and wiring brackets made from tomato skins.

WHAT OTHER RECYCLED MATERIALS DOES FORD USE?

Ford’s partnership with McDonald’s is not the first time the company has emphasized the use of organic and recylled materials in its manufacturing process.

In 2007, the company began using soy-based foam in its seats and headliners.

In 2008, recycled plastic bottles were used in in carpets and interior fabrics.

In 2009, the company converted wheat straw for storage bins and  cup holders.

In 2010, Ford began using recycled cotton for sound dampening material in its doors and trunks.

In 2011, recycled tires were converted into seals, gaskets, and dandelions for floor mats, cup holders, and interior trim.

In 2012, shredded US currency was used to make small  bins and cup holders.

In 2013, Ford began using rice hulls in its electrical harnesses.

In 2014, tomato skins were converted into wiring brackets and storage bins.

In 2015, cellulose tree bark was used in a number of ‘underhood’ components.

In 2016, cup holders and storage bins were made with agave fibers.

In 2017, captured CO2 was converted into material for foam and padding.

In 2018, Ford began using bamboo to a number of interior and ‘underhood’ components.