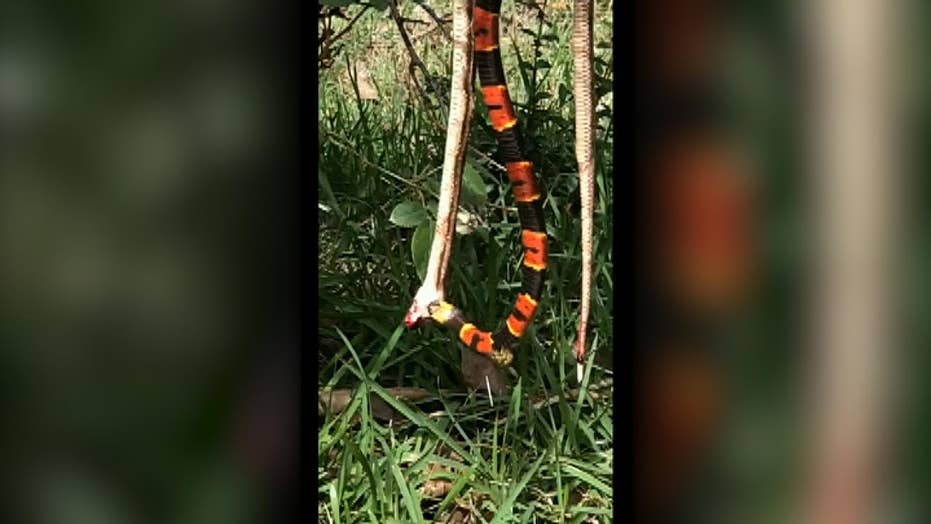 Florida wildlife has proven yet again just how wild it can be after a woman shared video of a venomous coral snake eating another snake while it was being attacked by a yellow jacket wasp.

Evangeline Cummings, an employee of the University of Florida, shot the video in her Gainesville backyard last week and shared it on Twitter to try and learn exactly how the wild scenario happened.

The video showed an eastern coral snake biting into what appeared to be a dead rat snake as the two serpents hung in the branches of a rose bush. A wasp then landed on the coral snake and moments later the reptile began to thrash about wildly to shoo away the wasp. 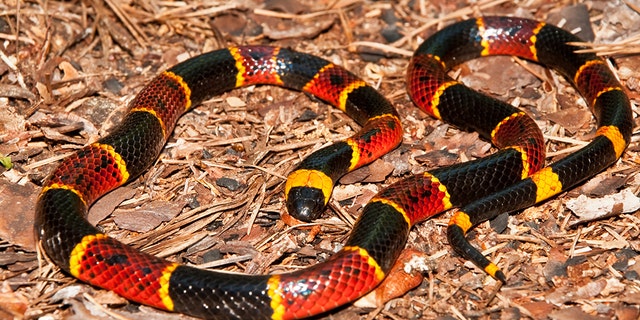 Eastern coral snakes, like the one pictured above, are relatives of the cobra, mamba and sea snake. The colored pattern of yellowing stripes touching red stripes indicates they are venomous.
(iStock)

It was unclear whether the wasp had stung the coral snake to make it whip about. It was also unclear how the two snakes ended up in the branches of the bush.

“Don’t know how rat snake got there,” Cummings wrote. “Dropped by a hawk? So many questions. And how does a coral snake climb the thorny rose bush!?!”

Natalie Claunch, a doctoral student at the university, replied that while coral snakes aren’t great climbers, the free meal acted as good motivation.

The eastern coral snake, also known as Micrurus fulvius, eats lizards, frogs and smaller snakes, including other coral snakes, according to National Geographic. While the serpents are known for their potent venom, they must chew on their victim to inject their poison fully.

For now, Cummings has settled on one idea of how circumstances unfolded.

“So we’ve now settled on our favorite theory: rat snake was dropped by a hawk or similar and landed in the rosebush,” Cummings wrote. “But the rat snake is somewhat twisted around the branches so I wonder if when it was dropped it was still partially alive and tried to free itself and could not.”