The NASA astronaut is one of the six people currently working and living 250 miles (402km) above our planet. But not everyone down on Earth believes the International Space Station is real or that humans have ever even left the atmosphere.

A subsection of conspiracy theorists known as Flat-Earthers has taken matters even further, by claiming the planet is a flat disk and not a globe.

Many of the Flat-Earthers voiced their discontent at the astronaut’s pictures, which they believe were manipulated to fool the rest of the world.

One Twitter user wrote: “I don’t believe you’re up there!! Also how r u able to use Twitter?

The same person added: “U only think its round because uve been told it is. Each to their own.” 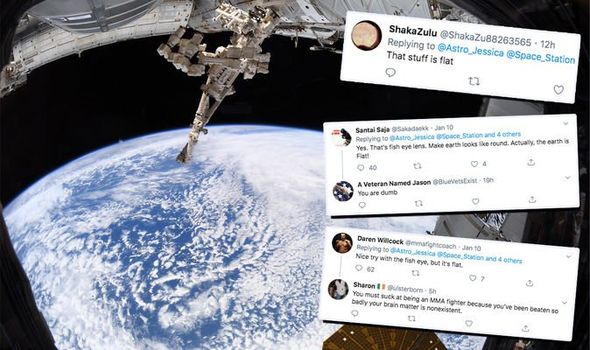 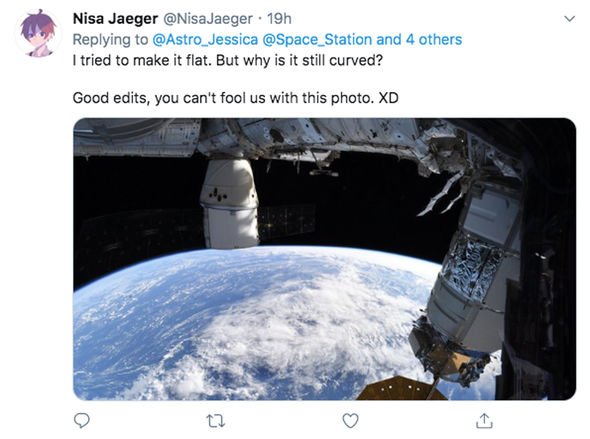 One Twitter user also stated: “That stuff is flat.”

Many were also quick to point out Dr Meir’s photos were taken with a fisheye lens.

A fisheye lens is an ultra-wide-angle lens that causes the edges of a photo to twist and distort.

Astronauts use these angles to capture wide panoramas of the Earth and will switch to telephoto lenses if they want to snap a particular city or feature on the planet’s surface.

You can see how the lens is distorting the space station by making its straight sections seem round.

Nice try with the fish eye, but it’s flat

Many Flat-Earthers believe NASA’s astronauts used fisheye lenses to hide the fact the Earth does not curve.

Another person said: “I tried to make it flat. But why is it still curved?

“Good edits, you can’t fool us with this photo.” 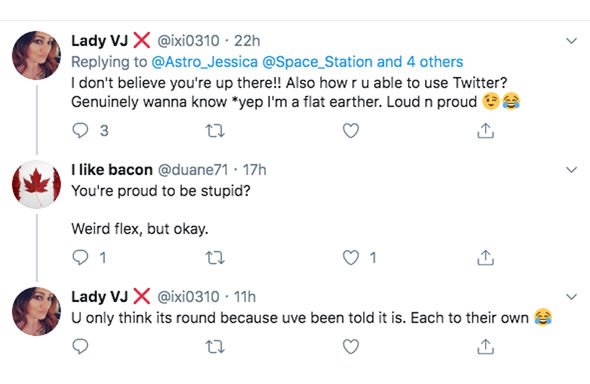 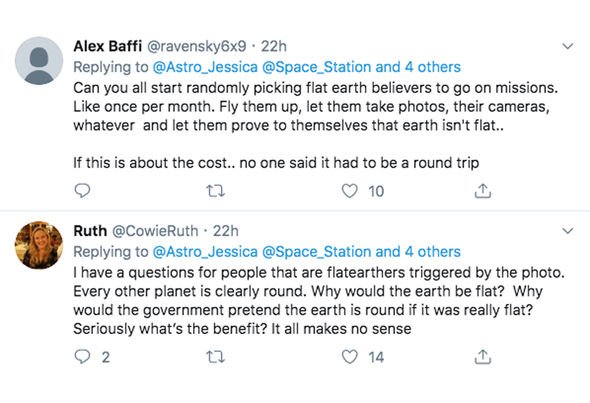 However, many more people came to the astronaut’s defence and praised Dr Meir for her breathtaking photos.

One Twitter user suggested NASA flies Flat-Earthers into space “so they can shut up once and for all”.

Alex Baffi said: “Can you start randomly picking flat earth believers to go on missions. Like once per month.

“Fly them up, let them take photos, their cameras, whatever and let them prove the earth isn’t flat..

“If this is about the cost.. no one said it has to be a round trip.”

Another Twitter user also asked: “I have a question for people that are flatearthers triggered by the photo.

“Every other planet is clearly round. Why would the earth be flat?

“Why would the government pretend the earth is round if it was really flat?

“Seriously what’s the benefit? It all makes no sense.”

How long have we known the Earth is round and not flat?

The ancient Greek astronomer Eratosthenes is understood to be one of the first people to determine the Earth’s shape.

More than 2,000 years ago Eratosthenes used a simple experiment to conclusively prove Earth was round.

He did so by planting a stick in the ground in the city of Alexandria, Egypt, and calculating the shadow cast by the stick at noon during the summer solstice.

At the same time, just south of Alexandria in Syene, no shadows were being cast at noon.

If the Sun was casting its light at the same angle but shadows were only present in one location, Eratosthenes determined the surface of the planet is curved.