The world’s oldest known all-purpose orifice sits in a fossil display case in the Senckenberg Natural History Museum in Frankfurt, Germany, so close to the glass that enshrines it that you can “put your face up to it, like this,” said Jakob Vinther, a paleontologist at the University of Bristol in England, holding his hand a couple inches from his nose.

It belongs to a Psittacosaurus, a beaked, dog-size, leaf-munching dinosaur that lived more than 100 million years ago. And it’s not technically an anus, even though it sometimes functioned like one. It’s a cloaca: a multifunctional outlet named for the Latin word for “sewer,” through which some animals — including a menagerie of modern birds, reptiles, amphibians and even a few mammals — can defecate, urinate, copulate and/or extrude their offspring or eggs.

Now, that orifice’s opening, which was flattened during its fossilization, has been reconstructed into a three-dimensional model and published Tuesday in the journal Current Biology. Close examination of the Psittacosaurus’s prehistoric privates suggest that the cloaca is somewhat crocodilian, but is still distinct among known nether regions.

“It’s always kind of a rare gift when we get soft tissues like this preserved,” said Armita Manafzadeh, a vertebrate paleontologist at Brown University who was not involved in the study.

The pristine Psittacosaurus fossil that served as the basis for the new 3-D model was unearthed in China decades ago. The animal’s body remained astoundingly intact through the eons, retaining even shreds of delicate, scale-studded skin and a freckling of pigment. 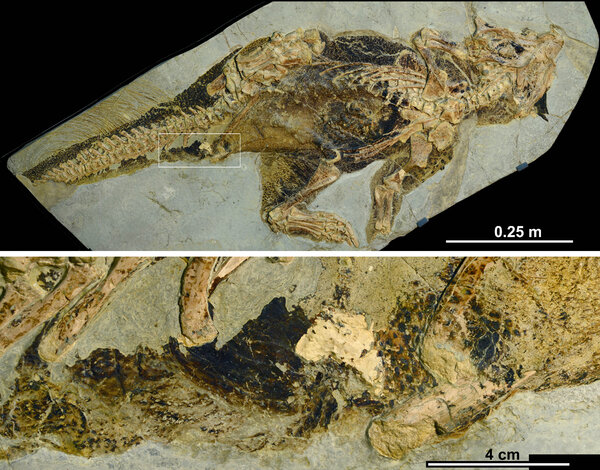 While inspecting it for another study, Dr. Vinther was struck by its cloaca — an anatomical area shrouded in mystery among dinosaurs because of a lack of viable tissue. The Psittacosaurus’s posterior physique, Dr. Vinther realized, was just intact enough to piece together a three-dimensional representation of the cloaca’s opening, or vent.

He recruited the help of Robert Nicholls, a paleoartist, to attempt the reconstruction. He also reached out to Diane Kelly, a biologist at the University of Massachusetts Amherst who specializes in the evolution of genitalia, to parse the functional implications of their find.

Dr. Kelly spent a long afternoon in her institution’s natural history collections photographing preserved animal rear ends, from amphibians to reptiles to birds, then turned her lens on the back ends of a friend’s live chickens. What she couldn’t find in person, she and her colleagues scavenged online, until the team had amassed a hefty survey of the known cloacal landscape.

(Conspicuously absent from the roster are the majority of mammals, including humans. “We are the odd ones out here,” Ms. Manafzadeh said. “We have weird extra holes.”)

Most vents look like nondescript slits — some horizontal, others vertical — or rounded holes, sometimes shrouded by a wrinkly wreath of skin or a smattering of scales, Dr. Kelly said. The Psittacosaurus variety might have been a bit more adorned. The team’s reconstruction showed that the vent was likely flanked by a pair of dark-colored lips, pinched on one end and flared at the other, creating a sort of drawn-curtain look.

“In many ways, I would say it’s unique,” Dr. Vinther said of the reconstructed vent. “Having a cloaca is not just, ‘Gee whiz, here’s a cloaca.’ It’s different from any living group we know of.”

Perhaps the closest analog is that of the crocodile, whose vent is ornamented with lips that pinch together at both ends, instead of fanning out tailward, Dr. Kelly said. The similarities were striking enough that the researchers proposed that, like crocodiles, the Psittacosaurus might have sported odor-rich musk glands on either side of its vent, wafting out a pungent perfume to attract mates.

The dark coloring of the lips, set against the backdrop of the animal’s pale underbelly, might have also served as a sexual beacon for other Psittacosauruses.

The researchers couldn’t draw firm conclusions about the cloaca’s interior. But if Psittacosaurus plumbing was more crocodilian than not, it might be reasonable to think that the animal’s cloaca also harbored a penis or clitoris, as most contemporary cloacas do. Among modern animals with a cloaca, only birds have jettisoned the phallus as a sperm delivery system, opting instead for a form of fornication called a cloacal kiss, in which the male swipes his vent against the female’s while vigorously ejaculating.

Dr. Kelly said she strongly suspected that most dinosaurs would have been of the penis-toting variety: “For the most part, if you have internal fertilization, you have some method of sticking it in.”

But the Psittacosaurus penis, if it existed, is long gone, leaving little clue to the biological sex of the creature, or how it might have copulated.

Patricia Brennan, an expert in animal genitalia at Mt. Holyoke College in Massachusetts who was not involved in the study, said a penis-bearing cloaca was very likely. But she also pointed out that a bulging lobe, situated between the lips of the Psittacosaurus’s vent, bore some resemblance to a structure that helps phallus-free male birds exuberantly expel large volumes of sperm.

“I am 100 percent certain that at least some dinosaurs had penises,” Dr. Brennan said. But it’s possible Psittacosaurus was one that did away with the appendage.

The researchers also found a fossilized lump of feces fixed in the Psittacosaurus’s fanny, a gratifying reminder of the cloaca’s versatility, Dr. Vinther said: “It’s quite nice to find it, right near where it’s supposed to come out.”