Final ‘Full Cold Moon’ of the decade will reach its peak on 12/12 at 12:12am EST – delighting numerologists

The final full moon of the decade will reach its peak in the night sky as the clock strikes 12:12am on 12/12 in the Eastern United States, delighting numerologists.

While only the Eastern United States will have such a notable time and date for the lunar peak, the full moon will be ‘bright and visible’ around the world.

This is a good time of year to watch and possibly photograph the full moon, according to NASA, because it is opposite a low sun.

‘The moon takes a high trajectory across the sky and as it is opposite to the low sun, it will be above the horizon longer than at other times’, NASA said in a blog. 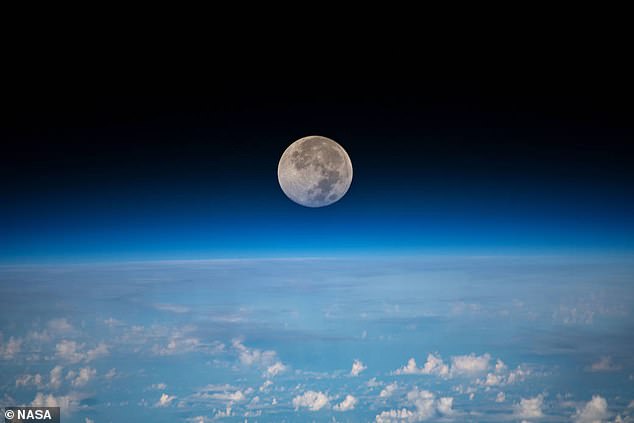 NASA captured this stunning image of a full moon over Earth from the International Space Station. The final full moon of the 2010s is on Thursday 12 December

The moon appears ‘full’ on Earth due to the relative positions of the Moon and the Sun.

When you look up at the final full moon of the decade on Thursday, the light you see is reflected from other objects – small amounts from Earth but mostly from the Sun.

We get a full Moon when it is on the opposite side of the Earth to the Sun – causing the near side of the Moon to be fully lit up.

The December full moon is known as the ‘Cold Moon’ because December is usually when temperatures start to drop.

It is also known as the Long Night Moon as it occurs near the winter solstice which is the longest night of the year.

The 2019 Winter Solstice is just over a week from the full moon, on Sunday 22 December, but the start of the decade saw the two events happen closer together.

In fact in 2010, the full moon and winter solstice happened less than a day apart – something that won’t be repeated until 2029.

As well as appearing at its peak in the Eastern United States at 12:12am EST on December 12, numerologists say the year is also significant as 2019 equals 12.

Twelve is an important number for numerologists, according to The Old Farmer’s Almanac, which says it symbolises ‘completion’.

The Naked Numerology account on Twitter informed followers that the 2019 full moon opens a 12:12:12:12 ‘portal’ that will lead to a ‘turning point’ for people. 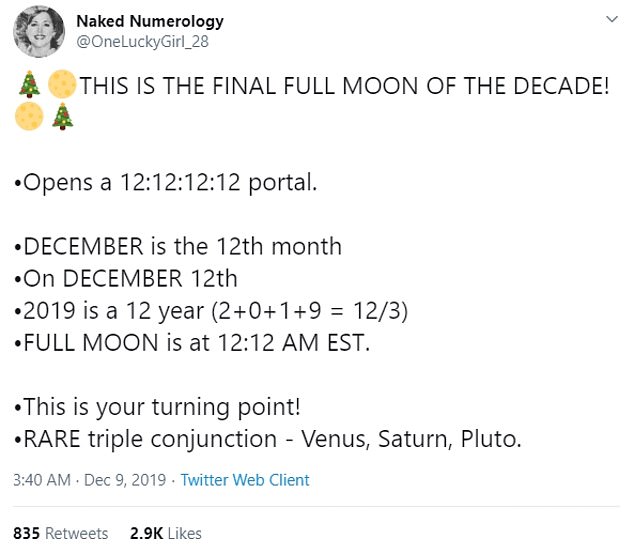 Naked Numerology took to Twitter to explain why the fact the full moon falls on the 12th of the 12th at 12:12am is important, suggesting it is a turning point for people

Meanwhile, the account Numerology Secrets describes the number 12 as ‘significant’.

‘This number is like a curtain call that allows you to get your affairs together so you can benefit from the windfall that the universe is about to bestow on you’, Numerology Secrets wrote.

In a continuation of the number 12 theme – only 12 people have ever walked on the moon – all American men sent by NASA as part of the Apollo mission.

But that number is set to increase, after NASA confirmed earlier this year that the 2020s would be the decade where humans would return to the surface of the moon for the first time since the 1970s.

The next manned lunar mission – Artemis – which will see the first woman and the next man step foot on the moon, is scheduled to launch in 2024. 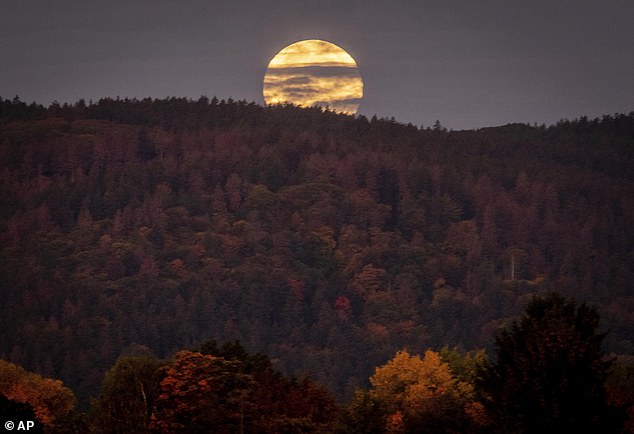 The full moon sets behind the forests of the Taunus region near Frankfurt, Germany, early Monday, Oct. 14, 2019. The ‘Cold Moon’ of December 2019 will rise to its peak at 12:12am on 12/12 in the Eastern United States but will appear the same size for hours either side of that time

The full moon will still be over the horizon as the Geminid meteor shower approaches its peak.

The Geminids are regarded as one of the highlights of the meteor shower calendar as they appear bold, white and quick as they enter the Earth’s atmosphere.

They come from a rock comet called 3200 Phaethon and produce up to 50 meteors per hour in the general direction of the Gemini constellation.

Astronomers say that despite appearing during a bright full moon, they should still be visible from about 02:00 in most countries on December 14.

WHO HAS BEEN TO THE MOON?

In total twelve people have walked on the moon.

Neil Armstrong made history by becoming the first person to set foot on the moon.

Edwin ‘Buzz’ Aldrin followed Neil Armstrong on to the surface of the moon.  His popular nickname gave itself to the animated characte Buzz Lightyear.

Pete Conrad and Alan Bean were the moon walkers on the Apollo 12 mission.

Alan Shepard and Edgar Mitchell who were part of the Apollo 14 mission. They launched on January 31, 1971, and landed in the Fra Mauro region of the moon, the original destination for Apollo 13.

David Scott and James Irwin landed on the moon and stayed for three days, until August 2nd.

John Young and Charles Duke were the next men to walk on the moon. When the crew reached lunar orbit, the mission almost had to be aborted because of a problem with Command/Service Module’s main engine.

The final people to walk on the moon were Eugene (Gene) Cernan and Harrison (Jack) Schmitt.

Before he left the moon, Cernan scratched the initials of his daughter Tracy into the lunar regolith. Since the moon does not experience weather conditions like wind or rain to erode anything away, her initials should stay there for a very long time.

All the men who have been to the moon