Worried about puppy fat? A fifth of dog owners are concerned their pet will put on weight over the festive period, survey reveals

If your waistband is straining a little more than usual after Christmas, you may not be the only one who has piled on the pounds.

A fifth of dog owners worry their dog will put on weight over the festive season, according to a UK survey by the Guide Dogs charity.

Just like the rest of the family, dogs are at risk of obesity after Christmas, as more than a third of owners admit allowing their pet extra treats during the festivities.

A quarter of dog owners take their pet out for fewer walks over Christmas, often due to the cold weather or because they want to curl up in front of the television. 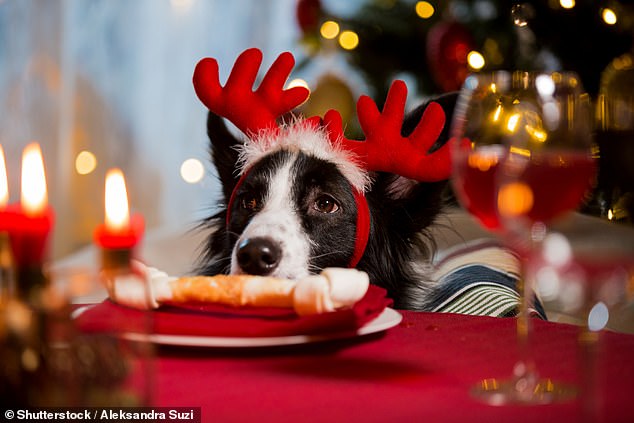 A fifth of dog owners worry their dog will put on weight over the festive season, according to a UK survey by the Guide Dogs charity (stock image)

HOW TO KEEP YOUR DOG IN SHAPE THIS CHRISTMAS

Play fetch with a frisbee or ball, or tug-of-war with a rope toy.

Hide healthy treats around the house for them to sniff out.

Play hide and seek behind trees and bushes with two family members, so your dog runs between them.

It means a quarter of dog owners will be putting their dog on a post-Christmas diet, while 27 per cent plan to increase their dogs’ physical activity to slim them down.

Tim Davies, Chief Veterinary Officer at Guide Dogs said: ‘Christmas is often a time of over-indulgence – and whilst it’s inevitable dogs might enjoy an extra treat or two over the festive season, it’s important they are kept active and maintain a healthy diet, to avoid putting on weight.’

The charity has provided tips on how to keep dogs at a healthy weight, including games like frisbee and fetch, to make running around more stimulating, or playing tug-of-war with a rope toy.

Last year a study by the Royal Veterinary College found one in 14 dogs are recorded as overweight by vets, with golden retrievers, English springer spaniels, pugs and beagles especially prone to weight gain.

The new survey, involving 2,000 dog owners who were questioned earlier this month, found around one in six dogs deviate from their normal diet over the festive period. 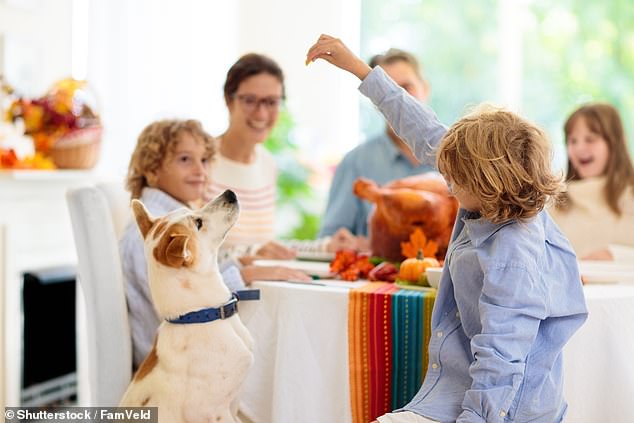 Pampered pooches are given turkey and chicken at this time of year, according to more than a third of owners, while a quarter said their dog ate sausages, and 18 per cent said their dog even munched on unwanted carrots (stock image)

Going from high to low risk of being overweight/obese:

Pampered pooches are given turkey and chicken at this time of year, according to more than a third of owners, while a quarter said their dog ate sausages, and 18 per cent said their dog even munched on unwanted carrots.

The canine Christmas scoffing is often unplanned, with 27 per cent of those surveyed saying their dogs are always ‘on alert’ to scoop up any dropped festive food, while 26 per cent worry their friends or family give their dog extra treats over the festive season, making it hard to keep track of what their pet is eating.

Among the quarter of owners who admitted taking their dogs for fewer walks over Christmas, almost half said this was because of the cold weather, and 45 per cent blamed the shorter daylight hours, while 48 per cent wanted to stay cuddled up with their dog watching festive films and television.

While 43 per cent of owners surveyed regularly monitored their dogs’ weight, almost a quarter said they would not know if their pet had a poor fitness level.

Concerningly, 26 per cent did not even know how frequently their dog needed to be walked.

Guide Dogs advises owners to increase their dog’s exercise with more frequent or longer walks, but to build these up slowly, especially if their dog is older or has health conditions.

The charity suggests swimming, which has a low impact on the joints, and playing games involving a dog searching for food around the house during mealtimes. 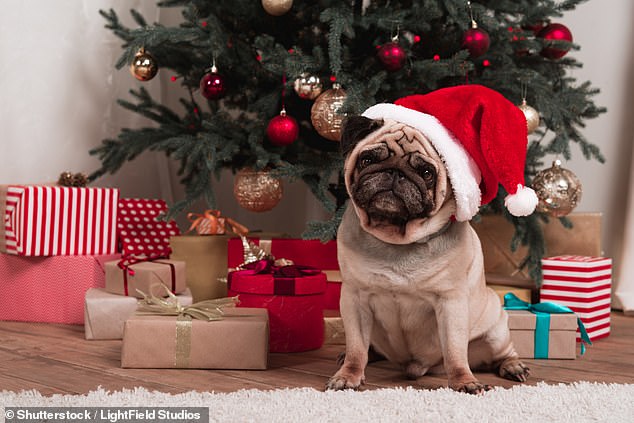 Last year a study by the Royal Veterinary College found one in 14 dogs are recorded as overweight by vets. The pug is the breed at greatest risk of obesity (stock image)

Playing hide and seek behind trees and bushes encourages a dog to run between two hidden family members.

A sign that a dog is overweight is if their ribs are well hidden below a layer of fat and their waist is not nipped in.

Dog’s classed as overweight or obese are more prone to illnesses including heart disease and cancer, and have increased strain on their joints, which can lead to back and hip problems.

Want to reduce your dog’s environmental paw print? Feed them DRY kibble and biscuits instead of wet food, scientists say

Vets have revealed the Christmas foods that can be TOXIC for dogs – and what to do if they eat them.

And, research has revealed that dogs whose owners spend a lot of time exercising are more likely to be fit themselves.