Facebook is under fire after it was revealed that the social media giant asks new users to provide their email passwords when they sign up to create an account.

The site prompts some new users to give up the highly sensitive information in order to login, catching the attention of security experts, some of which say the practice is no different than a phishing attack.

What’s worse, after users provide their email password, Facebook appears to be harvesting users’ contacts to store in its databases without their consent, according to Business Insider.

It comes mere weeks after Facebook was found to have stored hundreds of millions of users’ passwords in plain text, marking just the latest example of Facebook’s numerous privacy bungles. 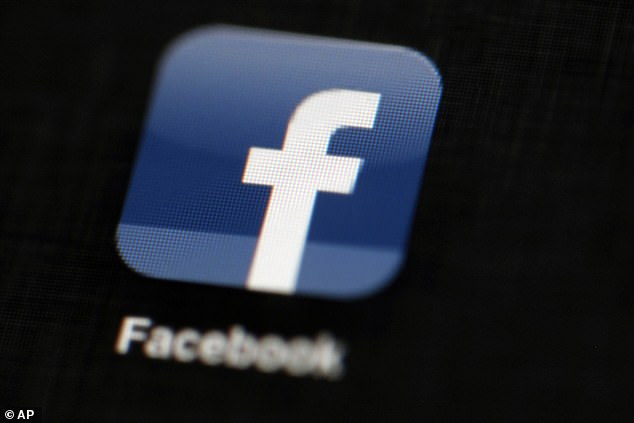 The findings were first reported by The Daily Beast.

When some users attempt to login, they’re met with a notice on the site that reads: ‘To continue using Facebook, you’ll need to confirm your email.’

The notice then has an empty field for entering their email password below the email address they used to register on the site.

The notice appears to show up only for users who sign up with certain email providers, such as Russian internet firm Yandex and GMX Mail. 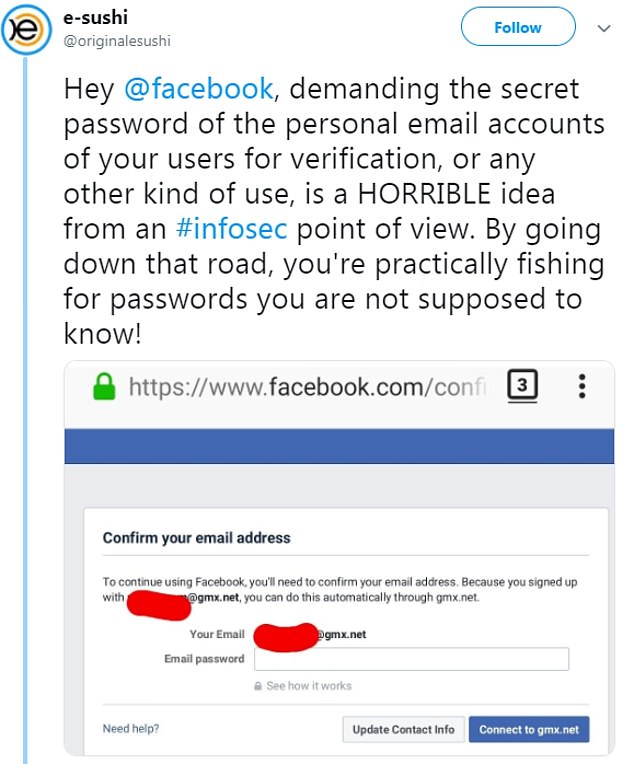 Twitter user @originalesushi first discovered the password entry form over the weekend. It requires some new users to provide their email password in order to verify their identity

Users with email addresses from Gmail, Outlook and other services aren’t being shown the notice because those providers use the OAuth protocol, which authenticates a user’s identity without requiring them to supply their password.

Once users provide their email password, Facebook shows a pop-up that says the site is ‘importing contacts.’

However, users aren’t given the option of consenting to this, Business Insider noted.

It’s unclear whether or not the site pulls any contact information or where it’s stored.

After the practice was discovered, Facebook announced that it would no longer give the option of providing an email password to login.

Facebook said only a ‘small number of users’ were asked to provide their email password upon logging in.

‘We understand the password verification option isn’t the best way to go about this, so we are going to stop offering it,’ a Facebook spokesperson told the Daily Beast.

The firm said users can also authenticate their account by having a code sent to their phone or a link sent to their email by clicking on the ‘Need help?’ button in the bottom left corner of the pop-up.

‘By going down that road, you’re practically fishing for passwords you are not supposed to know,’ the user wrote.

Security experts said the practice was concerning because it encouraged users to hand over private information that should only be shared in very limited circumstances.

Moreover, should Facebook ever experience a data breach the likes of those it has experienced previously, users email passwords could very well be up for grabs by hackers.

Another security expert compared Facebook’s request of email passwords to a phishing attack.

‘This is bad on so many levels,’ Bennett Cyphers, a security researcher with the Electronic Frontier Foundation, told Business Insider. 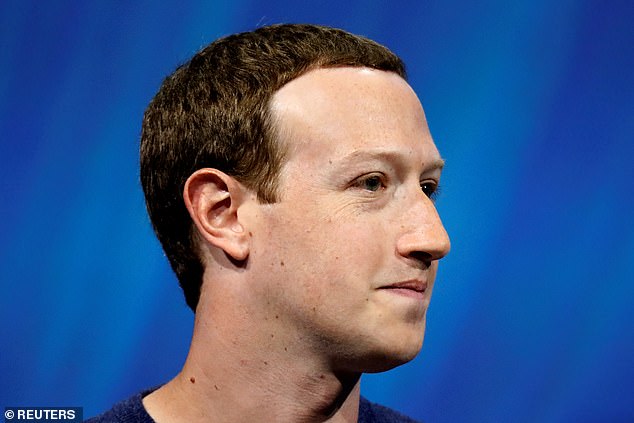 ‘It’s an absurd overreach by Facebook and a sleazy attempt to trick people to upload data about their contacts to Facebook as the price of signing up.

User trust in Facebook has been tested time and time again as it has weathered numerous privacy scandals.

It meant that the information was readable and searchable by more than 20,000 Facebook employees, in some cases dating as far back as 2012.

Prior to that, the firm announced in September it had been hit by its worst-ever data breach, with 50 million users’ information left exposed by an exploit in its ‘View As’ feature.

As of last year, Sony, Microsoft, and Amazon could all obtain users’ email addresses through their friends.

September 2018: Facebook disclosed that it had been hit by its worst ever data breach, affecting 50 million users – including those of Facebook boss Mark Zuckerberg and COO Sheryl Sandberg.

Facebook said it doesn’t yet know if information from the affected accounts has been misused or accessed, and is working with the FBI to conduct further investigations.

However, Mark Zuckerberg assured users that passwords and credit card information was not accessed.

As a result of the breach, the firm logged roughly 90 million people out of their accounts earlier today as a security measure.

March 2018: Facebook made headlines earlier this year after the data of 87 million users was improperly accessed by Cambridge Analytica, a political consultancy.

In 2013, Facebook disclosed a software flaw that exposed 6 million users’ phone numbers and email addresses to unauthorized viewers for a year, while a technical glitch in 2008 revealed confidential birth-dates on 80 million Facebook users’ profiles.