Facebook has bought a company which is inventing a way for people to control their smartphone with their mind.

The social media giant took over CTRL-labs in a deal reportedly worth up to $1billion (£803m) on Monday.

CTRL-labs is known to be developing on a watch-style device which intercepts signals which are sent from the brain to the fingers, in order to control a phone.

The company will be absorbed into Facebook’s Reality Labs team, the company’s vice-president of augmented and virtual reality, Andrew Bosworth said. 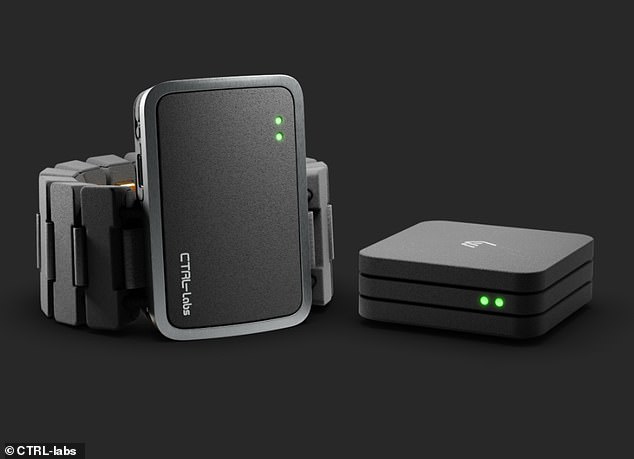 He said the mind-reading developments could ‘change the way we connect’ and ’empower you with control over your digital life’.

The device will be engineered to pick up and interpret the electrical signals the brain sends through the nerves, and translate these to actions in a computer chip.

This will allow people to control devices like a smartphone or tablet without physically using their hands to do it, the developers said.

Although Facebook did not reveal the cost of its purchasing the company, a source told CNBC it paid between $500million and $1billion (£400m – £803m) – a Facebook spokesperson said it was less than a billion.

Mr Bosworth wrote in his Facebook post which announced the deal: ‘We know there are more natural, intuitive ways to interact with devices and technology. And we want to build them. It’s why we’ve agreed to acquire CTRL-labs.

‘They will be joining our Facebook Reality Labs team where we hope to build this kind of technology, at scale, and get it into consumer products faster.

‘The vision for this work is a wristband that lets people control their devices as a natural extension of movement. 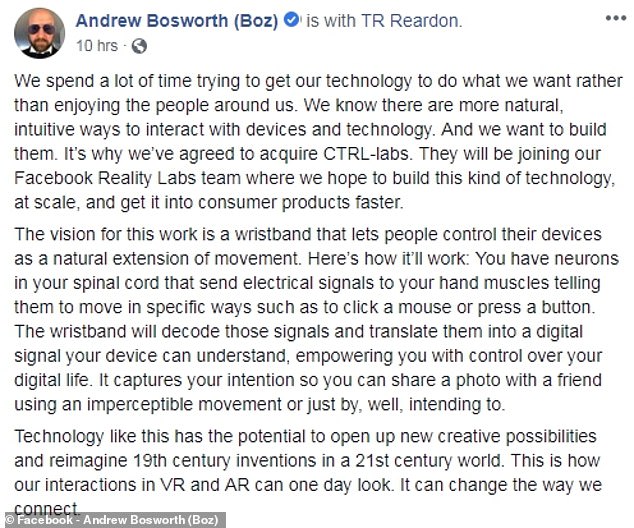 ‘Here’s how it’ll work: You have neurons in your spinal cord that send electrical signals to your hand muscles telling them to move in specific ways such as to click a mouse or press a button.

‘The wristband will decode those signals and translate them into a digital signal your device can understand, empowering you with control over your digital life.

‘It captures your intention so you can share a photo with a friend using an imperceptible movement or just by, well, intending to.

‘Technology like this has the potential to open up new creative possibilities and reimagine 19th century inventions in a 21st century world. This is how our interactions in VR and AR can one day look. It can change the way we connect.’

HOW THE WRIST STRAP WORKS

The technology works by focusing on the sets of signals that control movement as they travel through the spinal column.

Rather than a keyboard, you could type on a tabletop.

But the text on the screen is generated not by any physical interaction, but instead by the signals the brain sends to the fingers.

The armband intercepts this signals and interprets them, before relaying the output to the computer.

And the CTRL-Labs team has found that the system can pick up even more subtle signals, like the twitching of your fingers.

It could even allow you to type with barely imperceptible movements of your hands in your pockets.

The company hopes to shrink the size of their prototype device to a similar size to a smart watch.