Face masks make it EASIER for high court jurors to tell if witnesses are lying or telling the truth, study claims

High court jurors are actually better able to tell whether those on the stand are lying or telling the truth if the latter are wearing a face mask, a study has claimed.

University of Portsmouth-led experts studied how COVID has affected the lie-detecting capacities of juries via measures like face masks and virtual courtrooms.

They found that facial expressions and other non-verbal behaviours that might be lost behind a mask or over a video screen are in fact unreliable indicators of deceit.

Given this, masking these signals can make it easier for jurors to assess truthfulness — and suggest that anti-COVID measures are not detrimental to court proceedings. 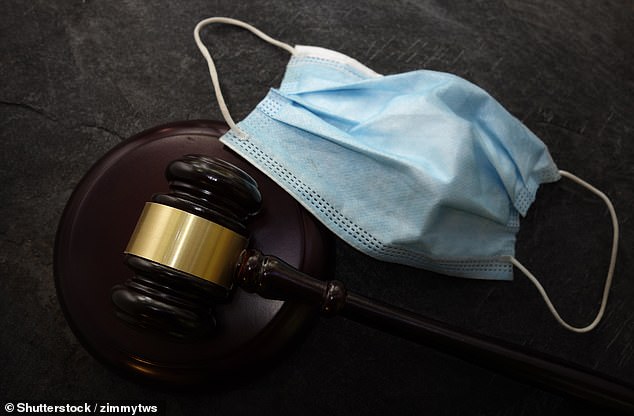 High court jurors are actually better able to tell whether those on the stand are lying or telling the truth if the latter are wearing a face mask (pictured), a study has claimed (stock image)

This piece of research focussed on the wearing of niqabs, rather than the medical-style masks widely adopted as a result of COVID.

It similarly found that depriving jurors of non-verbal cues made it easier for them to detect lies.

This is because the jury were forced to focus on what was being said — providing a more reliable indicator of deceit and truthfulness.

The research was undertaken by psychologists Aldert Vrij of the University of Portsmouth and Maria Hartwig of New York’s John Jay College of Criminal Justice.

‘In some ways we deliver good news. It does not seem that the measures to counter the spread of the COVID19 virus will negatively impact juries,’ said Professor Vrij.

‘Provided jurors are able to clearly hear the defendant and their speech is not muffled by the mask, there is no reason for concern.’

In their study, Professors Vrij and Hartwig reviewed hundreds of past studies on deception, focussing on those that assessed how well we can identify lies based on non-verbal cues such as demeanour, gestures and facial expressions.

These indicated people are only able to correctly detect deceit based on these indicators half of the time — an accuracy rate little better than random guesswork.

According to the team, habitual liars know how to cover up tell-tale behaviours that might give a more truthful individual away.

‘We draw attention to fundamentally problematic aspects of lie detection — in particular, the fact that non-verbal behaviour is not helpful,’ explained Professor Vrij.

‘It may suggest that the future lies in exploring how to translate science-based interviewing and interrogation protocols to the courtroom, to draw more accurate lie detection results from jurors.’

The team also explored studies that looked at whether it was easier or not to detect a liar in person than it was via a recording or video call — finding that lies were spotted just as well in both face-to-face and virtual courtrooms.

While the findings suggest that measures against COVID-19 have not significantly affected court proceedings, there are still questions outstanding, the duo said.

‘With only one existing study [explicitly] on how face coverings impact lie detection, it is clear more research needs to be done to address questions and concerns around how the pandemic is impacting the justice system.’

The full findings of the study were published in the Journal of Applied Research in Memory and Cognition.

WHAT ARE THE NINE WAYS TO SPOT A LIAR?

The big pause: Lying is quite a complex process for the body and brain to deal with. First your brain produces the truth which it then has to suppress before inventing the lie and the performance of that lie.

This often leads to a longer pause than normal before answering, plus a verbal stalling technique like ‘Why do you ask that?’ rather than a direct and open response.

The eye dart: Humans have more eye expressions than any other animal and our eyes can give away if we’re trying to hide something.

When we look up to our left to think we’re often accessing recalled memory, but when our eyes roll up to our right we can be thinking more creatively. Also, the guilt of a lie often makes people use an eye contact cut-off gesture, such as looking down or away.

The lost breath: Bending the truth causes an instant stress response in most people, meaning the fight or flight mechanisms are activated.

The mouth dries, the body sweats more, the pulse rate quickens and the rhythm of the breathing changes to shorter, shallower breaths that can often be both seen and heard.

Overcompensating: A liar will often over-perform, both speaking and gesticulating too much in a bid to be more convincing. These over the top body language rituals can involve too much eye contact (often without blinking!) and over-emphatic gesticulation.

The more someone gesticulates, the more likely it is they might be fibbing (stock image)

The poker face: Although some people prefer to employ the poker face, many assume less is more and almost shut down in terms of movement and eye contact when they’re being economical with the truth.

The face hide: When someone tells a lie they often suffer a strong desire to hide their face from their audience. This can lead to a partial cut-off gesture like the well-know nose touch or mouth-cover.

Self-comfort touches: The stress and discomfort of lying often produces gestures that are aimed at comforting the liar, such as rocking, hair-stroking or twiddling or playing with wedding rings. We all tend to use self-comfort gestures but this will increase dramatically when someone is fibbing.

Micro-gestures: These are very small gestures or facial expressions that can flash across the face so quickly they are difficult to see. Experts will often use filmed footage that is then slowed down to pick up on the true body language response emerging in the middle of the performed lie.

The best time to spot these in real life is to look for the facial expression that occurs after the liar has finished speaking. The mouth might skew or the eyes roll in an instant give-away.

Heckling hands: The hardest body parts to act with are the hands or feet and liars often struggle to keep them on-message while they lie.

When the gestures and the words are at odds it’s called incongruent gesticulation and it’s often the hands or feet that are telling the truth.