Cats that prey on wildlife have certain personality traits, a study suggests.

Pets that were described by their owners as more extraverted or less neurotic were more likely to hunt, researchers found.

The findings could help owners use specific strategies targeted to their cat’s personality in order to reduce its desire to hunt, while not impacting on its happiness, the researchers suggested. 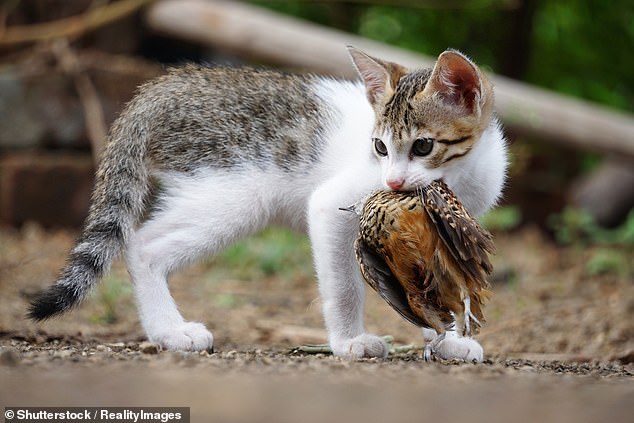 Pets that were described by their owners as more extraverted or less neurotic were more likely to hunt, researchers found (stock image)

The old adage states that dogs are man’s best friend, but research disputes that long-held title as experts claim cats get just as attached to us as canines do.

The study looked for signs of attachment in both cats and kittens when reunited with their owner in a strange place.

It is the first time scientists have shown that cats display the same sort of behaviour witnessed in dogs and human babies.

‘Hunting cats that showed higher scores for extraversion or lower scores for neuroticism are most likely to benefit from being stimulated and encouraged in physical activity, and by opportunities to reproduce natural feline behaviour in the home environment,’ the team from the University of Exeter said.

These activities can potentially include toys that mimic prey, as well as feeding enrichment, for example hiding food or the use of puzzle feeders – objects that must be manipulated in different ways to release the food – they said.

Owners of highly extraverted cats might tend to perceive common measures such as confinement as particularly restrictive for their pet, so knowing they were tailoring their approach to their cat’s specific needs might garner more support.

‘Management approaches to reduce predation that are focused on feline personality might bring benefits to cat welfare, reduce hunting motivation, and find greater support among cat owners, who express interest in effective “cat-friendly” measures to reduce predation upon wildlife,’ they wrote in the peer-reviewed journal Applied Animal Behaviour Science.

For the study, the owners of 162 cats completed a 48-item questionnaire about their cat’s personality.

Neuroticism involves criteria such as being insecure, suspicious and shy; dominance reflects bullying and aggressive behaviour towards other cats; and impulsive cats are erratic and reckless. 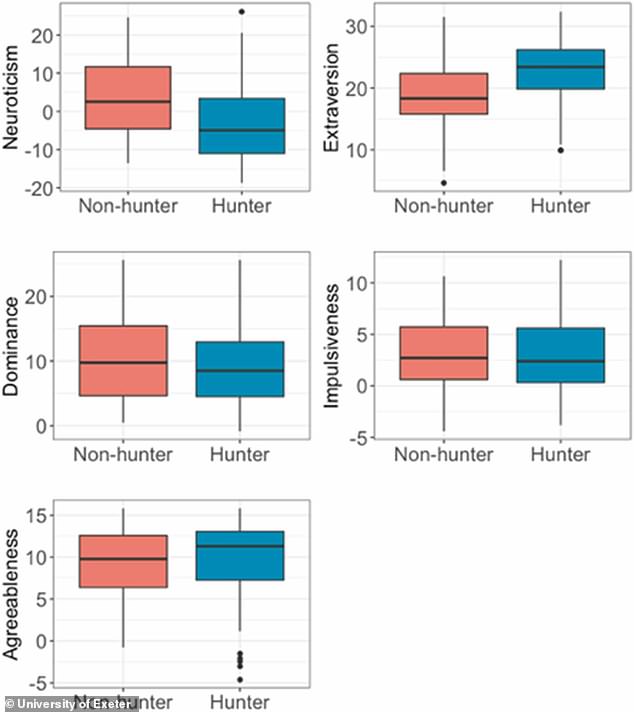 Agreeableness includes being affectionate and friendly to people, and gentle, while extraversion includes high scores for factors such as being curious, inventive, and active.

The pets were classed as hunters if they brought back at least one item of prey to their home during the time they were studied.

The study comes shortly after research revealed that cats really do recognise their owner’s voice if they are being spoken to directly.

Researchers from Université Paris Nanterre analysed how 16 cats reacted to pre-recorded voices from both their owner and that of a stranger when saying phrases directed at cats or humans.

They rated the behaviour of the cats reacting to the audio, specifically checking for things such as ear twitching, pupil dilation and tail moving.

Results revealed 10 out of the 16 cats showed a decrease in response when they heard audio clips of a stranger’s voice calling them by their name.

However, when hearing their owner’s voice their behaviour intensity significantly increased again.

The cats displayed behaviours such as turning their ears to the speakers, increased movement around the room and pupil dilation when hearing their owner’s voice.

The authors suggest the sudden rebound in behaviour indicates that cats can discriminate their owner’s voice from that of a stranger.

Playing with your cat and feeding them meat-rich foods can deter them from hunting wildlife, scientists say

Domestic cats with outdoor access can represent a major threat to local wildlife, including birds, small mammals, amphibians and fish.

Researchers from Exeter, however, have demonstrated that there are some simple strategies that can help temper our kitties’ murderous impulses.

These include ensuring that cats get all the micronutrients they need from their human-provided diet, so that they are not driven to seek extra food.

It is also important to ensure cats lead enriched lives and have opportunities to explore their natural hunting impulses through play with toys. 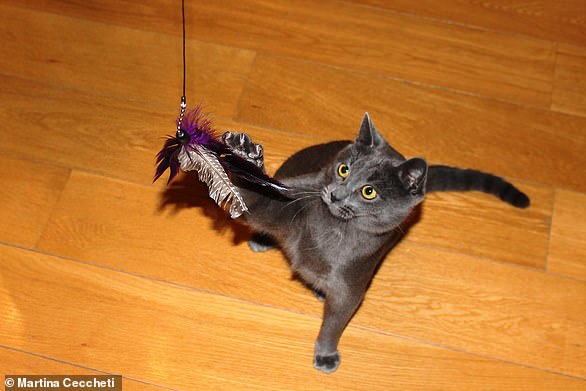 Fed up with kitty bringing home ‘little presents’? Playing with your cat (like with a feather wand, pictured) and feeding them meat-rich foods can deter them from hunting wildlife