Feeling stressed? Flirt with a coworker! Study finds harmless banter among peers improves your self-image – but has the opposite effect with a superior

Harmless flirting with co-workers maybe help pass the time, but a new study suggests it could have other benefits.

Researchers determined that banter among colleagues improves a person’s self-image, which in turn protects them from stressors in their lives.

The team is now questioning whether recent zero-tolerance policies toward workplace sexual behavior are missing the mark, as many firms have become strict when it comes to contact between employees.

However, the study also revealed that while employees enjoyed flirtation when it came from coworkers, it was less appreciated from supervisors.

Being the target of harassment creates stress, whereas Washington State University (WSU) Assistant Professor Leah Sheppard and her colleagues found that being the recipient of flirtation can relieve it. 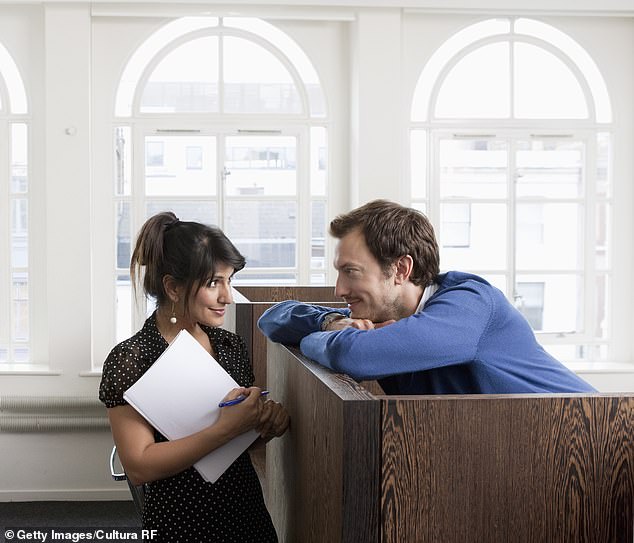 Harmless flirting with co-workers maybe help pass the time, but a new study suggests it could have other benefits. Researchers determined that banter among colleagues improves a person’s self-image, which in turn protects them from stressors in their lives

The team examined the little-studied area of non-harassing social sexual behavior which includes what the team called ‘sexual storytelling’.

This includes things like jokes and innuendos, as well as flirtatious behavior, and comprised of coy glances and compliments on physical appearance.

Surveys from hundreds of workers in the US, Canada and Philippines were used during the study.

The questions were collected before and after the famous #MeToo movement, which exposed sexual harassment by prominent figures in many fields and industries. 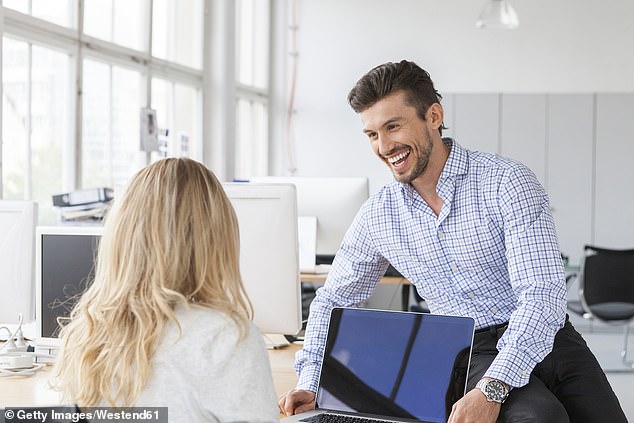 The team is now questioning whether recent zero-tolerance policies toward workplace sexual behavior are missing the mark, as many firms have become strict when it comes to contact between employees

Following the examination of the surveys, the team found that most employees were somewhat neutral about sexual storytelling but felt more positively about flirtation.

‘What we found is that when flirtation is enjoyed, it can offer some benefits: it makes people feel good about themselves, which can then protect them from stressors in their lives,’ said Sheppard.

Participants were asked about their experience with flirting in the workplace and workplace injustice, such as when they felt mistreated by their superiors.

The researchers then surveyed the workers’ spouses and coworkers to get outside observations on their stress levels.

And they found that flirtation actually helped alleviate the stress and insomnia of people dealing with workplace injustice.

The surveys revealed that while employees enjoyed flirtation when it came from coworkers, it was less appreciated from supervisors.

Sheppard said these results indicate that managers should look to find a balance, avoiding overly restrictive policies on social sexual behavior without promoting or engaging in it themselves.

‘At the same time, we’re not encouraging managers to facilitate this behavior.’

‘This is just something that probably organically happens.’

‘Managers also should be careful in engaging in flirtation themselves, especially with anyone at a lower level.’

‘As soon as there’s a power imbalance, you risk entering the domain of what might be perceived as sexual harassment.’

If someone begins talking to you by dishing out compliments and being encouraging to things you say, it is a good indicator they are interested – according to the researchers.

Some people will also give a quick flirtatious glance at the start of the conversation.

Crossing legs at any point, though, was a sign that a person was not interested in the other.

Also, if a woman doesn’t ask many questions, or shrugs a lot, she probably isn’t interested.

If the person is still attracted to you, they will likely be even more affirmative, and also still quite complimentary.

Instead, men will gaze at their partner if they are interested at this point, while women might start to divulge some personal details.

At the end of the conversation, women will open up and be joyful, while still palming, if they are still interested.

For women, you’ll want to look for a guy who has lowered his pitch from the earlier part of the interaction. This means they are still interested.