Scientists have identified a supernova in the making — two stars, some 1,500 light years away from the Earth, that are spiralling towards each other and certain doom.

The presence of a more massive white dwarf in the pair was inferred by how the subdwarf is being distorted into a tear drop shape as it loses matter to its partner.

This process will eventually see the ‘dead’ white dwarf star reignite and explode as a supernova, although the team say that this will not occur for 70 million years.

Until then, the pair will continue to orbit each other at the dizzying rate of one revolution every 100 minutes while the white dwarf consumes the subdwarf.

HD265435 is rare in that it represents one of only a few binary systems we have found to date that appear destined to go supernova.

In addition, the team said, the findings will improve our understanding of how supernovae form and could also help with studies of the expansion of the universe. 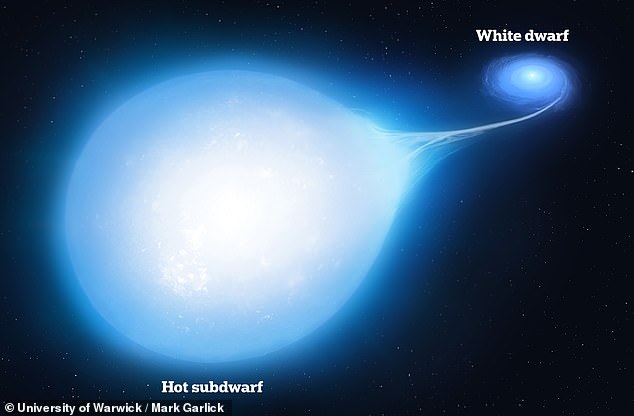 Scientists have identified a supernova in the making — two stars (pictured), some 1,500 light years away from the Earth, that are spiralling towards each other and certain doom

They are formed when red giant stars lose their outer hydrogen layers before the core begins to form helium.

The exact reason behind this mass loss is unclear, but astronomers believe that such can occur in binary systems — HD265435 — as a result of interactions between the two starts.

Single hot subdwarfs are thought to form from either the merger of two white dwarfs, or from the influence of smaller, sub-stellar companion bodies.

‘We don’t know exactly how these supernovae explode, but we know it has to happen because we see it happening elsewhere in the universe,’ said paper author and astrophysicist Ingrid Pelisoli of the University of Warwick.

‘Another way is that because they are losing energy to gravitational wave emissions, they will get closer until they merge.’

Regardless, Dr Pelisoli explained, ‘once the white dwarf gains enough mass from either method, it will go supernova.’

In their study, the researchers detected the hot subdwarf in data from NASA’s Transiting Exoplanet Survey Satellite, or TESS for short.

The team did not observe the white dwarf directly — instead, they were able to infer its precense based on how the subdwarf’s brightness varied over time in such a manner that suggested a massive object was distorting the star’s shape.

The astronomers next assessed the radial and rotational velocities of the hot subdwarf using measurements taken from the Palomar Observatory in California and the Echellette Spectrograph and Imager (ESI) at Hawaii’s Keck Observatory.

This allowed them to confirm that the ‘hidden’ white dwarf, despite being smaller than the Earth, is as heavy as the sun.

Moreover, added to that of the hot subdwarf — at 0.6 solar masses — the stars together have the mass needed to cause a supernova, crossing the so-called ‘Chandrasekhar mass limit’ of 1.4 solar masses. 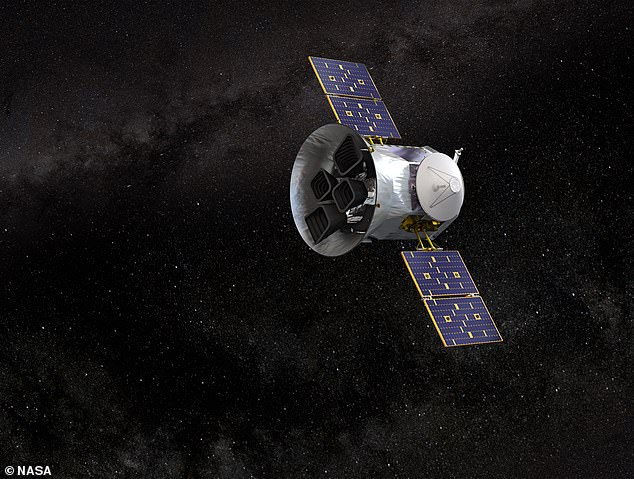 In their study, the researchers detected the hot subdwarf in data from NASA’s Transiting Exoplanet Survey Satellite, or ‘TESS’ for short. Pictured: an artist’s impression of TESS

Type 1a supernovae — those created in white dwarf binary systems — are important for cosmologists, as they can be used as ‘standard candles’.

These are bodies who emit a specific type of light at a constant brightness, meaning that by comparing their predicted luminosity with how they appear when viewed from Earth, experts can accurately measure how far away they are.

In this way, studies of supernovae in distant galaxies allows astronomers to calculate the rate of expansion of the universe.

‘The more we understand how supernovae work, the better we can calibrate our standard candles,’ said Dr Pelisoli.

‘This is very important at the moment because there’s a discrepancy between what we get from this kind of standard candle, and what we get through other methods.

‘The more we understand about how supernovae form, the better we can understand whether this discrepancy we are seeing is because of new physics that we’re unaware of and not taking into account.

‘Or simply because we’re underestimating the uncertainties in those distances.’ 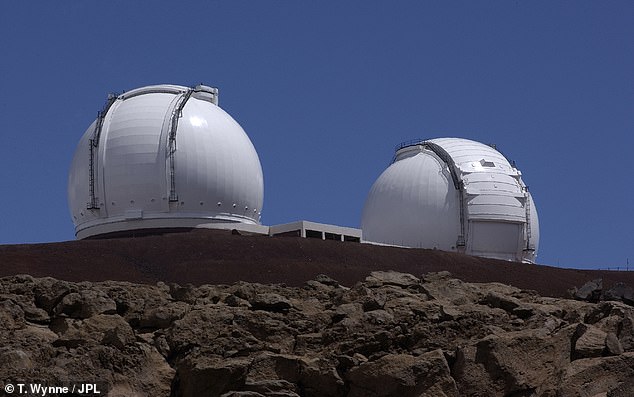 The astronomers assessed the radial and rotational velocities of the hot subdwarf using measurements taken from the Palomar Observatory in California and the Echellette Spectrograph and Imager (ESI) at Hawaii’s Keck Observatory, pictured

‘There is another discrepancy between the estimated and observed galactic supernovae rate, and the number of progenitors we see,’ said Dr Pelisoli.

‘We can estimate how many supernovae are going to be in our galaxy through observing many galaxies, or through what we know from stellar evolution, and this number is consistent.

‘But if we look for objects that can become supernovae, we don’t have enough.

‘This discovery was very useful to put an estimate of what a hot subdwarf and white dwarf binaries can contribute.’

However, Dr Pelisoli noted, this ‘still doesn’t seem to be a lot. None of the channels we observed seems to be enough.’

The full findings of the study were published in the journal Nature Astronomy.