Are YOU drinking enough water? Experts reveal how much to consume to stay hydrated as temperatures in parts of the UK are expected to hit 43°C today

Around two thirds of Britons do not drink enough water, researchers have warned — as much of the UK roasts in record-breaking heat.

Experts say people should drink at least two litres of water every day, although this is a rough estimation and actually depends on a person’s age, gender and weight.

Now a new study for Austrian company Waterdrop, which found that 66 per cent of the population is not drinking enough water every day, has led to the creation of a ‘My Hydration’ app.

It estimates how much water a person needs to consume every day and allows them to track their progress by entering what they have drunk and when.

As an example, it suggests that 2,600ml should be consumed by men and women in their 20s or 30s who are an average weight.

This decreases with age but increases with weight, while more water should be drunk if a person is exercising or if it is hot.

A person in their 50s should be looking to drink around 2,220ml of water, according to the app. 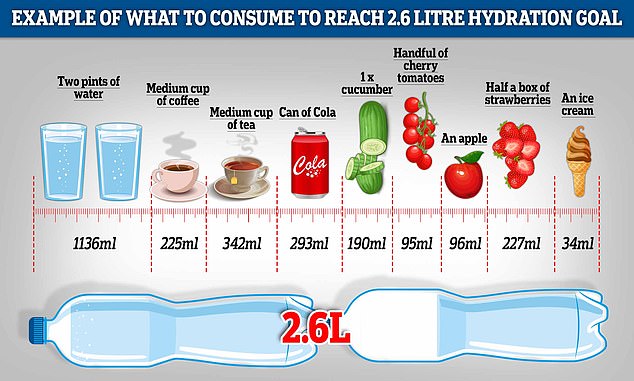 Dehydrated Britain: Around two thirds of people in the UK do not drink enough water, researchers have warned. The graphic above shows how much water you should drink a day on average (about 2.6 litres), but broken down into more than just water. Your intake can also come from coffee, tea, ice cream, cola, vegetables and fruit  (pictured) 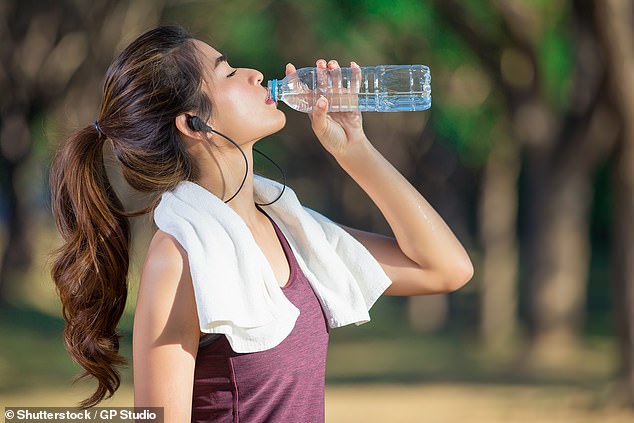 The human body is made up of nearly 60 per cent water, including 75 per cent of the brain and 71 per cent of the liver, so staying hydrated is vital, particularly in hot weather (stock image) 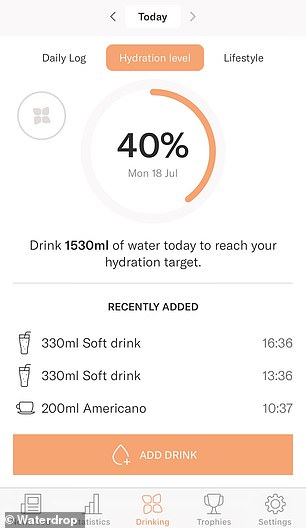 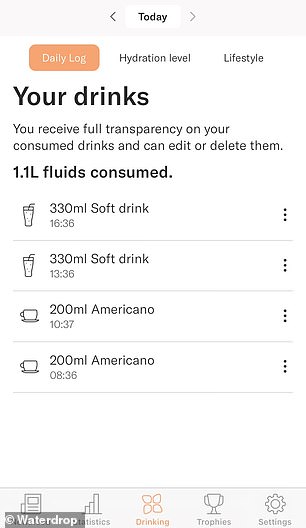 A study for Austrian company Waterdrop, which found that 66 per cent of the population is not drinking enough water every day, has has led to the creation of a ‘My Hydration’ app (pictured)

WHY IS IT IMPORTANT TO DRINK AT LEAST 2 LITRES OF WATER?

The NHS recommends drinking 6 to 8 glasses of water a day regardless of gender, age or weight, while in the US, the National Academies of Sciences, Engineering, and Medicine has broken it down more specifically.

This covers fluids from water, other beverages and food — with about 20 per cent of daily fluid intake usually coming from food and the rest from drinks.

For example, a medium-sized cucumber is made up of around 96 per cent water, similar to lettuce, radishes and celery.

An apple is 84 per cent water and strawberries 91 per cent.

People can also get a portion of their water intake from tea and coffee, with a medium cup of the former equating to 342ml and the latter 225ml.

But as Britain continues to swelter in stifling temperatures, the amount of sweat expelled during these months increases, which makes it particularly important to replace the fluid lost in sufficient quantities.

According to the research by Waterdrop — a global hydration specialist — around two-thirds of Britons do not drink enough water.

The survey showed that this rises to 79 per cent in people over 65 years old.

Around 90 per cent of participants also said they had experienced signs of dehydration, including water retention, dry mouth, headaches and more.

But dehydration can also have more far-reaching effects, including reduced immunity and joint pain.

Research has even linked it to acid reflux, heart disease, type 2 diabetes and Alzheimer’s disease.

Waterdrop’s study, which sampled 1,000 people from the UK between the ages of 17 and 99, found that 26 per cent did not feel the need to drink water and 45 per cent never paid much attention to what they should be drinking.

Navin Khosla, a pharmacist at the online health clinic FROM MARS, said: ‘Staying hydrated is the key to feeling fit and healthy during these hot periods, and you shouldn’t be taking drinking water for granted in a heatwave — it really is essential.

‘I would try to recommend drinking 20 per cent more than your usual intake, replacing the consumption of tea, coffee, alcoholic beverages, and sugary drinks with water. 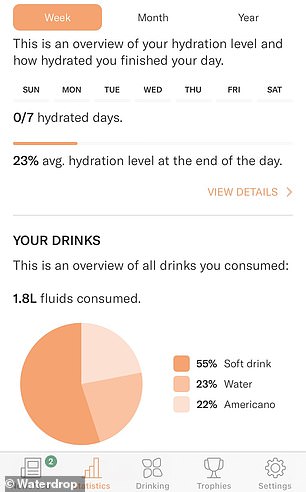 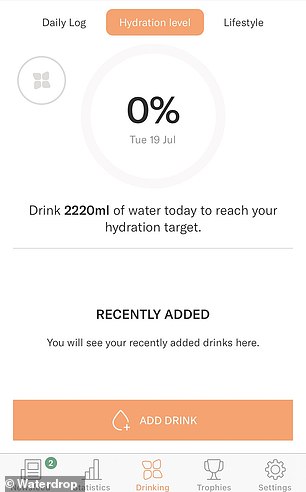 As an example, it suggests that 2,600ml should be consumed by men and women in their 20s or 30s who are an average weight

‘This change may not be to everyone’s taste, so you could add flavour to your drinks through fruits, whilst milk and smoothies are also good options to help replenish a lack of fluids.’

He added: ‘Some of the advice I can give you is perhaps more forthright, and I cannot stress enough the importance of checking your wee.

‘This may not be a common thought for most people, but the colour and smell of your urine is a key indicator when it comes to dehydration, and it should become apparent to you if it is dark yellow in colour and strong smelling.’ 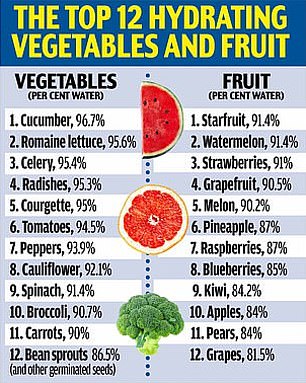 About 20 per cent of daily fluid intake usually comes from food and the rest from drinks. For example, a medium-sized cucumber is made up of around 96 per cent water

Previous research, which also involved a survey of the British public, found that less than a quarter of adults regularly drink the recommended two litres of water a day, while one in seven admit drinking more alcohol than water.

Around half said they had a tea or coffee instead of water, with 30 per cent saying ‘they need caffeine more’.

More than a third of Britons thought water was boring.

Another study found that as little as a 2 per cent reduction in optimum hydration leads to measurable cognitive loss (which returned when the study participants were fully hydrated), affecting performance in tasks that require attention, memory skills, feelings and judgements.

A 2 per cent reduction is about one litre of water.

That same tiny degree of dehydration has been shown to affect blood vessels in a similar way that smoking a cigarette does — even in healthy young men, as a study published in the European Journal of Nutrition in 2017 found.

GP Dr Ellie Cannon said: ‘Water is the healthiest way to hydrate; it energises us, aids digestion and weight loss and improves the complexion to name just a few of the benefits. 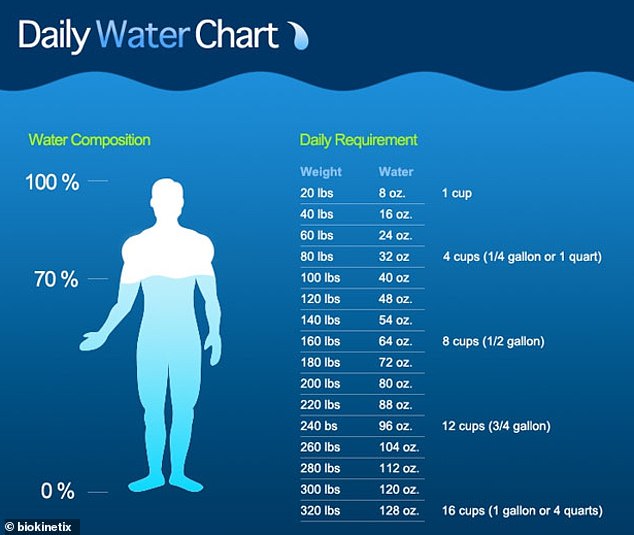 WHAT HAPPENS WHEN YOU DON’T DRINK ENOUGH WATER?

‘Despite this, many people are drinking far less than they should and their health could be suffering as a result.’

She added: ‘Simple tricks like adding a little sparkle to your water can help encourage you to drink more water every day and you’ll be feeling healthier and re-energised before you know it.’

Water is essential for our bodies. We need it to take valuable chemicals, minerals, nutrients and oxygen into our cells.

It also helps maintain our body temperature (through sweat) and helps get rid of waste products.

It acts as a shock absorber and lubricant for our joints and tissues, eyes, nose and mouth, helping to protect our organs.

Not only do we need water for these vital functions, we are ourselves largely made up of water — around 60 per cent.

As we get older, this changes — so while babies might be 75 per cent water, in older people this could be as low as 55 per cent.

One reason is the age-related decline in muscle mass (muscles are about 75 per cent water).

So being hydrated really does matter, and it is clear from research that even the smallest amount of dehydration can have a big impact on the body and the brain.

To help combat dehydration among the UK population, Waterdrop has developed its hydration application tracker. This allows people to track their drink consumption and set daily goals.

The hydration tracker is available to download for both iOS and Android.

HOW MUCH WATER SHOULD YOU BE DRINKING?

One formula for how much water you should be drinking is as follows:

Step 2: Multiply that number by your age.

Step 4: Your total is how many ounces of water you should drink each day.

Divide that number by eight to see your result in cups.