Europe’s winter heatwave seen from SPACE: Satellite image shows the distinct lack of snow in the Swiss Alps as they bathe in summer-like temperatures of 66.5°F

New satellite imagery reveals the effect of Europe’s ‘winter heatwave’ in the thick of the continent’s winter skiing season.

An image posted by the European Union’s Copernicus Programme shows a distinct lack of snow surrounding the Swiss town of Altdorf, which is close to skiing resorts.

TikTok videos also reveal the disappointing snow cover at various skiing spots in the Alps, with stark patches of land exposed due to melted ice. 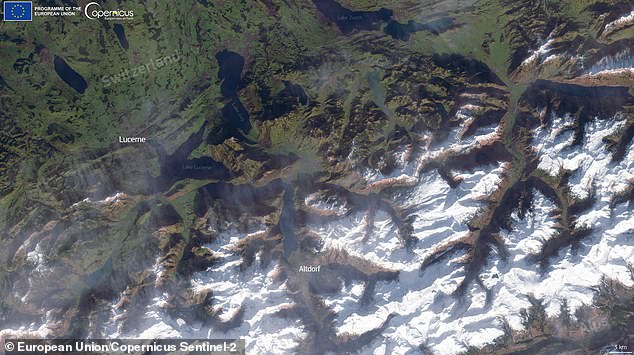 This image, acquired by one of the Copernicus Sentinel-2 satellites on January 1, 2023, shows Altdorf, a Swiss town where the temperature reached 66.5F (19.2°C)

The multi-billion Copernicus programme aims to help predict weather phenomena such as El Nino and track the progress of global warming.

There are three lots of twin satellites currently orbiting the Earth, named Copernicus Sentinel-1, 2 and 3.

The new satellite image was captured by Sentinel 2, one of the Earth observation satellites that makes up the Copernicus Programme.

According to the programme, 2023 has started with ‘a historic heatwave’ affecting Europe, with many countries observing the warmest temperature on record for January 1, potentially due to human-caused climate change.

‘Hundreds of temperature records have been broken and summer-like temperatures have prevailed in numerous cities across the continent,’ Copernicus says on its website.

‘Copernicus open data and services are key for the monitoring of the effects of climate change and extreme temperatures on alpine environments.’

According to meteorologists, European countries including Denmark, Netherlands, Poland and Czech Republic had their warmest January day on record on New Year’s Day. 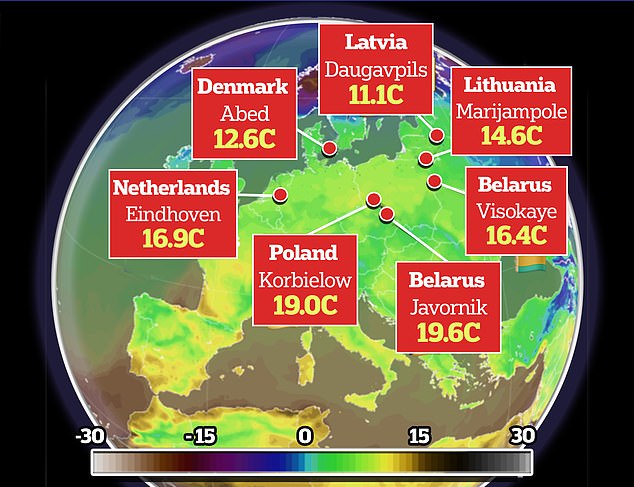 According to meteorologists, European countries including Denmark, Netherlands, Poland and Czech Republic had their warmest January day on record on New Year’s Day.

The data was collated by Maximiliano Herrera, a climatologist and weather historian who runs the ‘Extreme temperatures around the world’ Twitter account (@extremetemps).

Herrera told the Washington Post that the period of extremely warm weather was ‘totally insane’ and ‘absolute madness’.

It’s ‘the most extreme event ever seen in European climatology, Herrera said. ‘Nothing stands close to this.’

British meteorologist Scott Duncan also said: ‘The intensity and extent of warmth in Europe right now is hard to comprehend.

‘We just observed the warmest January day on record for many countries in Europe.

2023 is already expected to be one of the hottest years on record globally, partly due to the absence of the cooling ‘La Niña’ weather pattern.

La Niña – Spanish for ‘the girl’ – occurs when stronger equatorial winds, blowing east to west, lower the sea surface temperature across the eastern equatorial part of the central Pacific Ocean.

Met Office has said 2023 will be the 10th consecutive year in which global temperatures will be at least 1.8°F (1°C) above pre-industrial levels.

2022 will turn out to be warmest year on record for the UK, says Met Office

2022 will turn out to be the warmest year on record for the UK, the Met Office has said.

The average temperature for the whole of this year is on track to beat the previous all-time high of 49.7°F (9.88°C) set in 2014, the provisional data shows.

The exact figure will be confirmed in the new year, but the Met Office is confident 2022 will set a new 139-year annual mean temperature record. 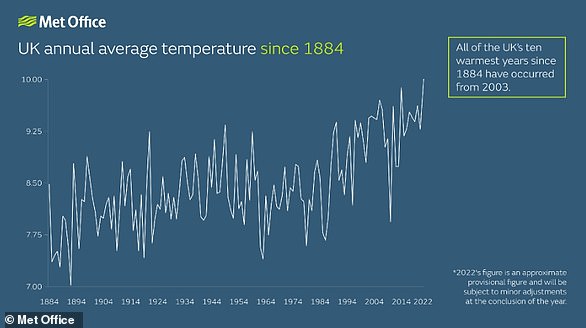 Since records began in 1884, all 10 years that have the highest annual UK temperature have occurred since 2003

It has blamed the ‘persistence of warmer than average conditions’ throughout the year, while the record-breaking heat waves in July also bumped up the average.

If the provisional data is correct, 2022 will sit at the top of the list of highest UK average temperature since records began in 1884.

Met Office also said UK temperatures in 2022 remained above average for every month of the year except December, which has been cooler than average so far.

2022 has seen the coldest first two weeks of December since 2010 – an ‘anomalously cold start’ to the month.