Archaeologists have found that some of Ethiopia’s 20-feet-tall phallic monoliths, or ‘stelae’, were made some 2,070 years ago – 1,000 years earlier than previously thought.

Researchers from the Washington State University dated charcoal samples from the bases of the stones at three sites: Chelba Tututi, Sakaro Sodo and Soditi.

All three locations fall within Ethiopia’s Gedeo zone, which harbours Africa’s highest concentration of megalithic stelae, with around 10,000 monuments over 60 sites.

The team’s analysis concluded that the monuments at the Sakaro Sodo site were likely erected sometime around the year 50 BC.

The only stelae to have previously been dated are at Tuto Fela, around 30 miles north of Sakaro Sodo. These were erected in 1100 AD, making them significantly younger.

Despite the proliferation of the striking structures, they have been somewhat under-studied, and the exact reason for their creation remains uncertain.

However, experts believe that some of the stones were used as burial markers, while others may have commemorated the transfer of leadership to a new generation. 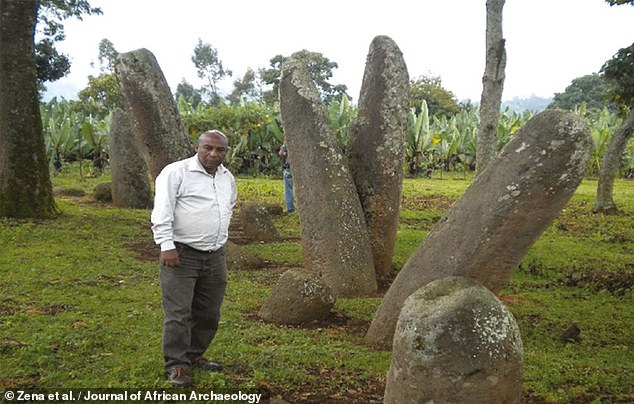 Archaeologists have found that some of Ethiopia’s 20-feet-tall phallic monoliths — or ‘steale’ — were made 2,070 years ago, 1,000 years earlier than thought. Pictured: examples of the steale seen at the  Sakaro Sodo site in the Gedeo Zone

Many have been forward for consideration for UNESCO World Heritage Status.

The stones vary in size, layout and function, although experts believe that some were used as burial markers while others commemorated significant achievements or the transfer of power down to the next generation.

Some stones are plain, while others, such as seen at Tuto Fela, pictured below, sport intricate carvings.

The study was undertaken by archaeologist Ashenafi Zena, formerly of the Washington State University but now based at the State Historical Society of North Dakot, and his colleagues.

According to Dr Zena, Sakaro Sodo ‘is one of the most understudied archaeological sites in the world, and we wanted to change that.’

The archaeologist was moved to investigate the monuments’ origins further after visiting them with his supervisor Andrew Duff, also of Washington State, in 2013.

‘It was shocking to see such a large number of monuments in such a small area,’ Dr Zena said of his experiences during that trip.

‘Looking at the stones, many of which had fallen to the ground and some have broken into pieces, I decided to focus my dissertation work there instead of investigating cave sites in southern Ethiopia.’

Not much is known about the people who populated the Sakaro Sodo region at the turn of the first millennium.

According to the researchers, however, the new date for the earliest stelae appears to coincide with the arrival of domestic animals in southern Ethiopia, and the development of more complex social and economic systems.

‘One of the reasons why this research is important is because it has the potential to shed new light on what the earliest people in this area were doing for a living as well as what their cultural and social practices were,’ said Professor Duff.

Along with pushing back the date of the earliest stelae’s construction by more than a thousand years, the researchers were also able to determine for the first time where the monument builders quarried raw stone for the structures.

Partially completed stelae were found in quarry sites in both Ethiopia’s Gedeo zone as well as further afield in the Sidama region.

The team were also able to trace the sources of various small obsidian flakes uncovered from the stelae sites across Gedeo, finding, unexpectedly, that most originated in the north of Kenya, some 186 miles away.

This reveals that the people who erected the monuments most likely obtained obsidian through some form of long-distance trade.

Using a combination of archaeological and ethnographic methods, including studies of living megalithic stele traditions in the region, experts have concluded that the stones were used for various purposes.

This includes the commemoration of the transfer of power down from one generation to the next, as well as to commemorate group achievements. 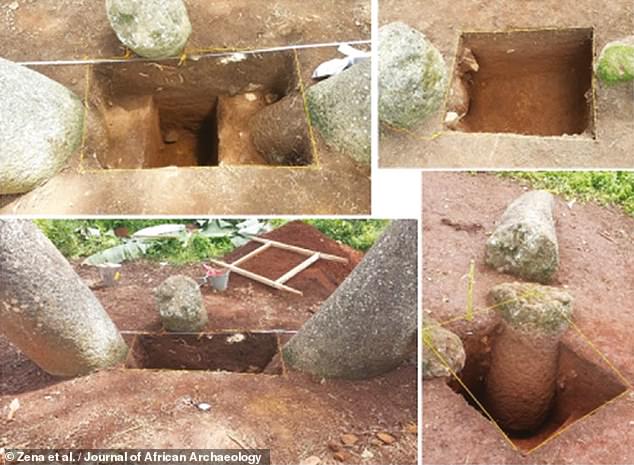 Researchers led from the Washington State University dated charcoal samples from the bases of the stones at three sites: Chelba Tututi, Sakaro Sodo and Soditi. Pictured: examples of some of the excavations at the base of the monuments conducted by the team at Sakaro Sodo

‘The diversity of function of the stelae in Ethiopia is really fascinating,’ Professor Duff commented.

‘For example, we know that the more recently constructed stelae monuments of Tuto Fela in the north part of Gedeo were used as burial markers.’

Meanwhile, he explained, ‘the linear placement pattern of the earliest stones at Sakaro Sodo makes us think they may have been markers to signify the passing of generational leadership.’ 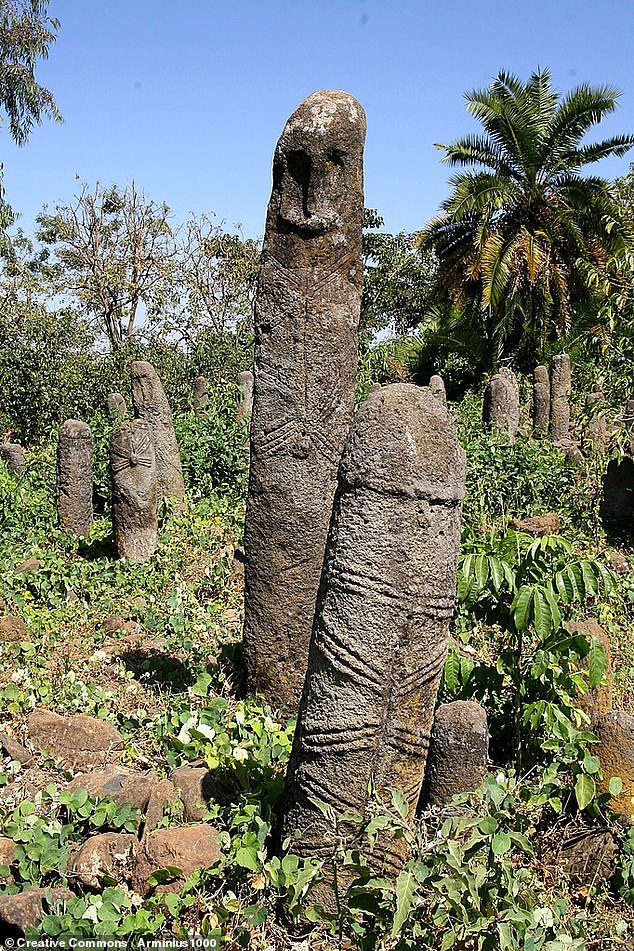 The team’s analysis concluded that the monuments at the Sakaro Sodo site, specifically, were likely erected sometime around the year 50 BC. The only stelae to have previously been dated — at Tuto Fela (pictured), some 30 miles north of Sakaro Sodo — were erected in 1100 AD, making them significantly younger

Both the Chelba Tututi and Sakaro Sodo site have been nominated for protection as a world heritage site.

‘Developing a better understanding of the function of these stones and how they were erected is really useful in terms of gaining a UNESCO World Heritage designation,’ Duff said.

‘This could in turn help generate tourism revenue, which is a major economic factor for the country.’

The full findings of the study were published in the Journal of African Archaeology. 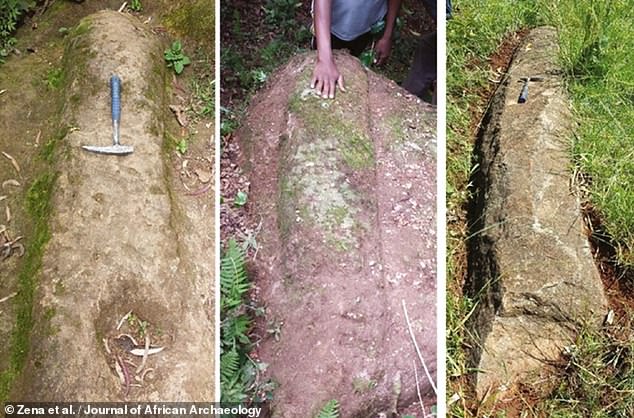 Along push back the date of the earliest stelae’s construction by more than a thousand years, the the researchers were also able to determine for the first time where the monument builders quarried raw stone for the structures. Pictured: unfinished stelae found in quarry sites in the Gedeo zone (Tututi, left, and Soditi, centre) and the Sidama region (Dilla), right 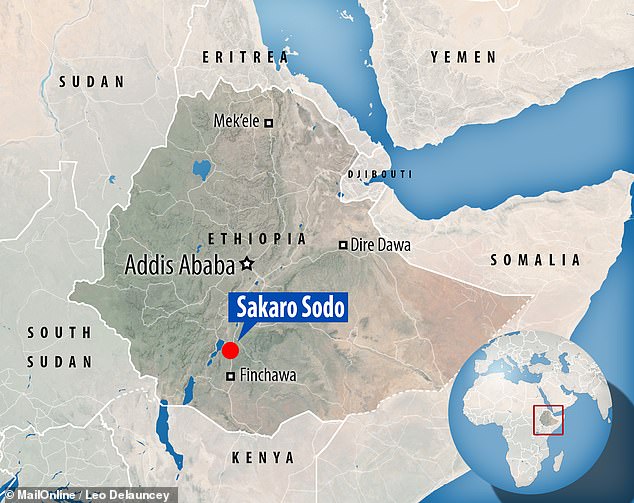 According to Dr Zena and his colleagues, the political situation in Ethiopia — not to mention the challenges posed by the COVID-19 pandemic — have made following up on their initial research difficult.

However, the team do have a number of lines of investigations which they have said that they would like to pursue going forward.

On one hand, the team are looking to collaborate with colleagues at Ethiopia’s Addis Ababa University to examine some of the other 46 stelae sites in Gedeo.

Professor Duff is also leading a project in tandem with the Ethiopian Department of Archeology and Heritage Management to propose ways in while the sites might be better managed in the future.

This initiative is both looking at preserving the heritage of the region, but also in helping to generate tourism at the sites.