Darren Blakeley, 53, filmed the bizarre cloud formation while on holiday in Phuket, Thailand on April 22.

The footage shows other passersby coming to a halt after becoming mesmerised by the floating object.

In the video, the bowl-shaped red cloud formation floats aimlessly in an otherwise clear, dark sky.

It bears a startling similarity to scenes seen in hit blockbuster Avengers: Endgame, which has been smashing box office records in the past two weeks.

Flashes of lightning bolt through the inside of the cloud, with the occasional rumble of thunder.

Two lit up objects emerge from the inside of the formation before hovering over the top of it.

The video cuts off with one of the objects floating above the odd cloud.

New Zealand native Darren said: “I started filming as I remember thinking ‘this is crazy interesting’ and that I’d never seen anything like it.

“I believe the off things in the sky are UFOs. 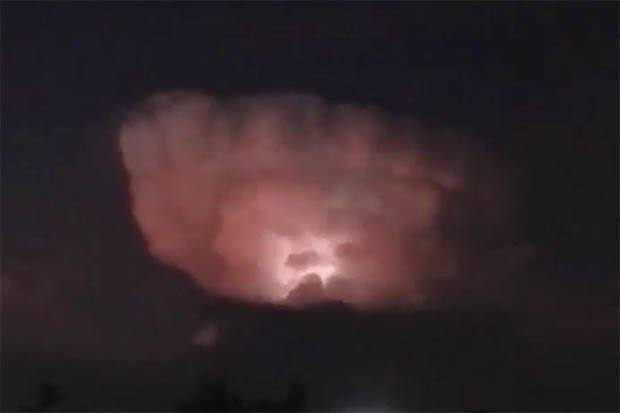 Many people have even likened it to scenes from the final Avengers film.

One person said: “Never seen any cloud formation like this before!

“Amazing but scary too! Could be a portal and things flying around UFOs.”

Another said: “Definitely a visitor from outer space.”

It comes following a mysterious “plasma cloud shaped like a face” appeared in the skies across America.