Damaging levels of pollution will still be released into the atmosphere even if electric cars become widespread, a Government report has warned.

Brake, tyre and road surface wear all contribute to dangerous emissions – regardless of the type of vehicle used.

Plastic debris created from this wear and tear also contributes as much as 28 per cent of the total microplastics added to the ocean worldwide.

The Air Quality Expert Group’s Non-Exhaust Emissions from Road Traffic report said that the best way to reduce emissions is to lower the overall volume of traffic.

Other green ideas detailed in the report include lowering the motorway speed limits and creating emissions limits for brake pads and tyres. 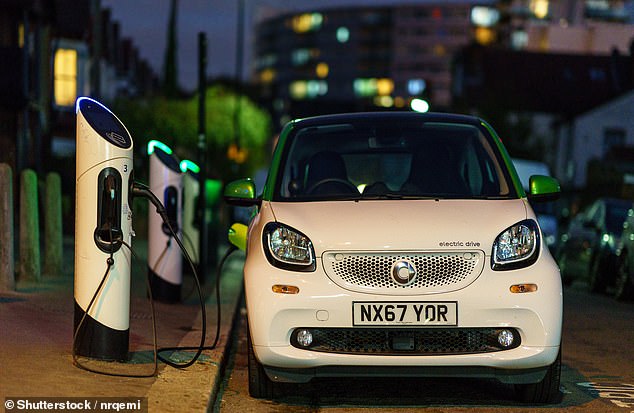 Damaging levels of pollution will still be released into the atmosphere even if electric cars become widespread, a Government report has warned 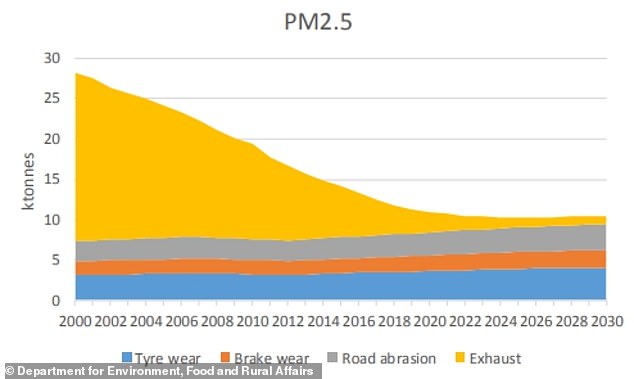 Brake, tyre and road surface wear as well as the resuspension of road dust all contribute to dangerous emissions – regardless of the type of vehicle used. Pictured: particulate emissions and their cause in the UK between 2000 and 2030

WHAT KINDS OF NON-EXHAUST EMISSIONS ARE THERE?

Standard friction brakes force a brake pad against the rotating drum to stop the car. This process wears down the surfaces on both objects, releasing particles into the air.

As the tyre comes into contact with the road it is steadily eroded, releasing rubber particles. Larger ones remain on the road until they are washed off, often into rivers or oceans. Smaller pieces will become airborne.

The road’s surface is also impacted by cars driving on it, and particles are released into the air.

Dusts from a number of sources, such as construction, settle on roads and are kicked up by cars passing by them, sending them airborne.

The report notes that as exhaust pollutants have decreased thanks to regulations set by the EU, the proportion of non-exhaust emissions has increased.

Current estimates say that exposure to particulate air pollution contributes to around 29,000 deaths across the country every year.

Vehicles add particulates to the air by wearing down tyres, brakes and road surfaces.

Because of their tiny size, they can penetrate deep into the lungs and throat, causing health issues.

The rubber on tyres also adds to microplastic pollution as particles remain on the road until they are washed away by rainwater.

While the report, commissioned by the Department for Environment, Food and Rural Affairs (DEFRA), does acknowledge electric cars can produce less emissions, it disagrees with the phrase ‘zero emission vehicle’.

The report, commissioned by Department for Environment, Food and Rural Affairs, the Scottish Government, the Welsh Government and the Department of the Environment in Northern Ireland had a number of ideas for how to reduce pollution.

Even though electric cars do not produce exhaust emissions, they do create emissions ‘further up the energy-supply chain… depending on the source of the electricity’, it states.

Some electric cars use regenerative braking, which involves cutting power instead of friction brakes, meaning it does not generate significant particle numbers.

Plastic debris creation from tyre and break wear is estimated to be between 5 per cent to 28 per cent of the total microplastic release into the oceans worldwide.

The report warns: ‘These estimates make wear and tear from tyres at least as important as plastic bottles, bags and fibres released from clothing during washing.’

In the wake of the report, ministers have called for the development of new technology to tackle non-exhaust emissions.

Environment Minister Thérèse Coffey told the BBC: ‘The documents published today make clear that it is not just fumes from car exhaust pipes that have a detrimental impact on human health but also the tiny particles that are released from their brakes and tyres.

‘Emissions from car exhausts have been decreasing through development of cleaner technologies – and there is now a need for the car industry to find innovative ways to address the challenges of air pollution from other sources.’

The Government plans to ban the sale of all new diesel and petrol cars from 2040, but this report indicates more must be done to tackle non-exhaust emissions.

MPs on the climate change committee said earlier this year that electric cars will have an equivalent range and price as fossil fuel models by that date.

However, MPs warn that restrictions in obtaining the required natural resources for the batteries, mainly the element cobalt, means the 2030 may be missed.

It is therefore expected to recommend 2035 as the latest possible date.

Issues with rolling out battery-powered cars, according to previous recommendations from the committee, focus on a lack of charging points.

By this point, according to government targets, the UK should be entirely carbon neutral.

Scotland has a different set of guidelines, indicating the switch-over and ban of petrol or diesel vehicles should happen by 2032.