The last two living northern white rhinos have had their eggs harvested by scientists  in the hope of using them to save the subspecies from extinction.

Ten eggs were harvested from the female rhinos at the Ol Pejeta Conservancy in Kenya by a team that included experts from the Leibniz Institute, Germany.

They hope to use the eggs to create viable embryos that can be transferred into surrogates as neither of the remaining rhinos can carry a pregnancy to term.

This is the third round of eggs taken from the rhinos since August 2019 and they were immediately flown to the Avantea Lab in Italy to be artificially inseminated with frozen sperm from now-dead northern white rhino bulls. 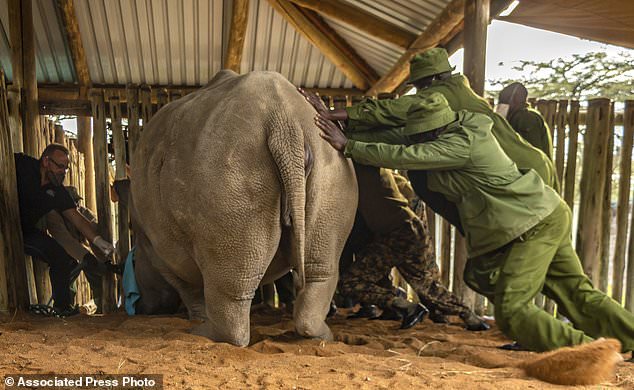 A team of scientists and local rangers prepare to extract eggs from one of the two remaining female northern white rhinos at an enclosure at Ol Pejeta Conservancy, Kenya 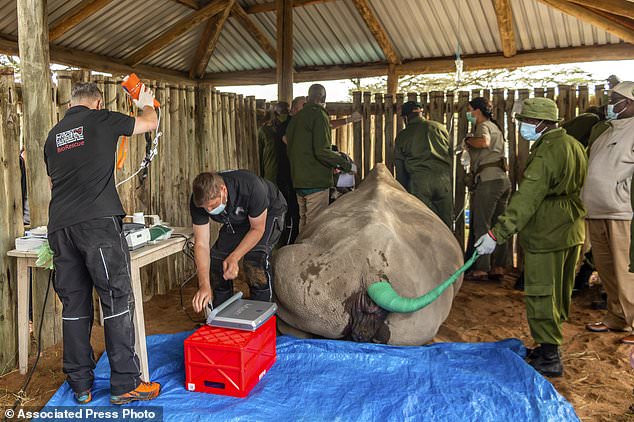 The coronavirus pandemic had delayed the process, but it finally went ahead as planned, with the team saying it ‘went smoothly and without any complications

The coronavirus pandemic had delayed the process, but it finally went ahead as planned, with the team saying it ‘went smoothly and without any complications.’

Three embryos were created from the previously extracted eggs and the next step is to select female southern white rhinos to act as surrogate mothers.

Neither of the remaining northern white rhinos – a mother and her daughter – can carry a baby to term, according to experts from Kenya’s Ol Pejeta Conservancy.

However, they do still produce eggs and so it is hoped that using the similar southern white rhino subspecies as a surrogate – they can bring them back.

The northern white rhino once wandered through east and central Africa but, as with other rhino species, its numbers plummeted due to heavy poaching.

Northern white rhinos – the world’s most endangered mammal – have hairier ears and tails, are shorter and stockier and have different genes than their southern cousins.

Scientists first harvested eggs from the females a year ago and they produced three pure northern white rhino embryos that are now frozen and waiting for a surrogate.

The scientists realised they must synchronise implanting embryos with the reproductive cycle of the surrogate mothers for the process to work.

The more embryos they have, the better, which is why they have carried out three extractions from the mother and daughter pair. 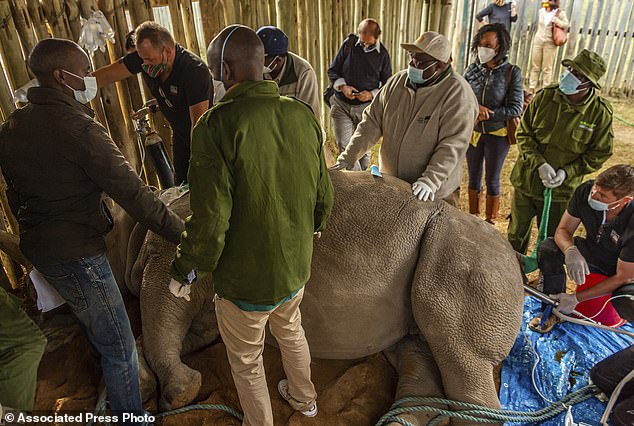 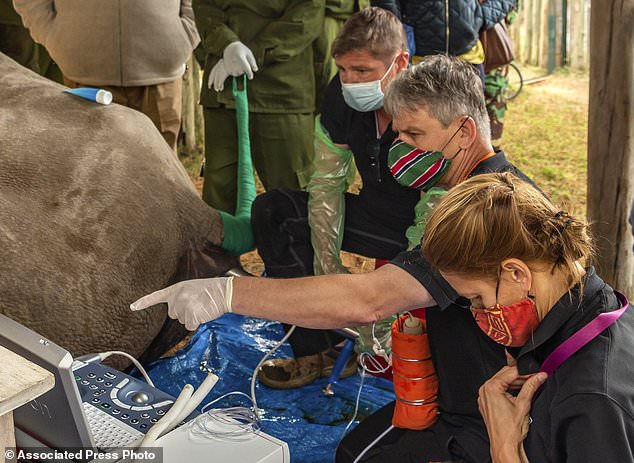 Northern white rhinos – the world’s most endangered mammal – have hairier ears and tails, are shorter and stockier and have different genes than southern cousins. 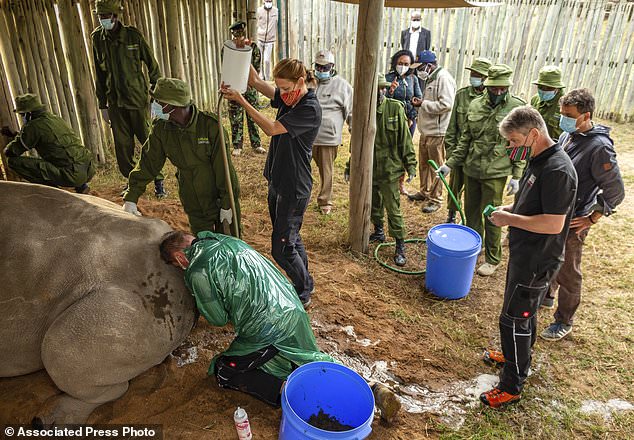 One potential snag is that humans do not know how to detect when the time to insert the embryo is right – so they found a ‘romantic decoy’.

A southern white rhino bull will be sterilised, transported to Ol Pejeta and set loose among potential surrogate mothers. His response will signal when they are on heat.

‘Thanks to his activities we would be able to identify the right time for inserting the embryo,’ team coordinator Jan Stejskal, from Dvur Králové Zoo explained..

‘We start early in the morning, the first female is immobilised and then the procedure lasts for about two hours,’ Stejskal said of the egg harvest.

The eggs are so delicate they must be immediately flown to a laboratory in Europe in an incubator hand-carried by a scientist.

‘If you want to start a population of the northern white rhino, one baby is not enough, you need as many babies as possible,’ Stejskal said.

While the death of Sudan marks a symbolic turning point in the fight to save the northern white rhino, in fact the survival of the species has been entirely reliant on untested IVF techniques for years.

It was hoped that Sudan, his daughter Najin and granddaughter Patu might be able to produce offspring when they were moved to Kenya in 2009, but their close genetic relationship rendered them infertile.

Since at least 2015 scientists have been working with IVF and stem cell techniques in the hopes of being able to create a viable northern white rhino embryo, according to a GoFundMe page for the project.

Researchers in Berlin and San Diego are using DNA samples collected from a dozen northern whites, including Sudan, and trying to apply techniques developed for humans to the animal.

If a viable embryo can be created, it would then have to be implanted into the womb of a southern white rhino, since Majin and Patu will likely be dead before the technique is perfected.

While the southern white rhino would be responsible for giving birth to the baby, because the infant’s genetic material came solely from northern whites, it would be a member of that species.

However, as Save The Rhino points out, the process is fraught with difficulty and has a low chance of success.

In the last 15 years just 10 rhino births have resulted from artificial insemination and only two embryos have ever been created – one of which divided into two cells before perishing, and the other one into three.

For the northern white rhino to be genetically viable a minimum of 20 healthy individuals must be born – meaning the whole process must be successfully completed 20 times – to avoid inbreeding.

Then, it would be necessary to find a suitable habitat for them, since their old habitat has largely been destroyed and led the species to the brink of extinction in the first place.