EDIBLE sensor made from salt, red cabbage and beeswax can detect whether your frozen food has thawed and been refrozen – reducing the risk of food poisoning

Scientists have created an edible sensor that can detect whether your frozen food has thawed and then been refrozen – and is therefore potentially contaminated.

The proof-of-concept sensor, created in Milan, Italy, consists of a small chamber made of beeswax containing table salt and red cabbage.

It provides a colour readout when it’s warmed above a certain temperature, which is tunable from -58°F to 32°F (or 0°C, the freezing point).

The technology could minimise the risk of food poisoning by alerting both producers and consumers when products have started defrosting. 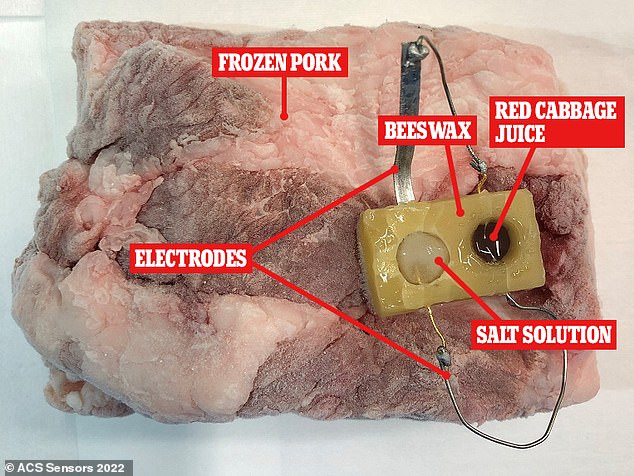 A proof-of-concept sensor designed from edible materials produces a visible color change (seen in the right circle) as a piece of frozen pork thaws, from reddish purple to blue 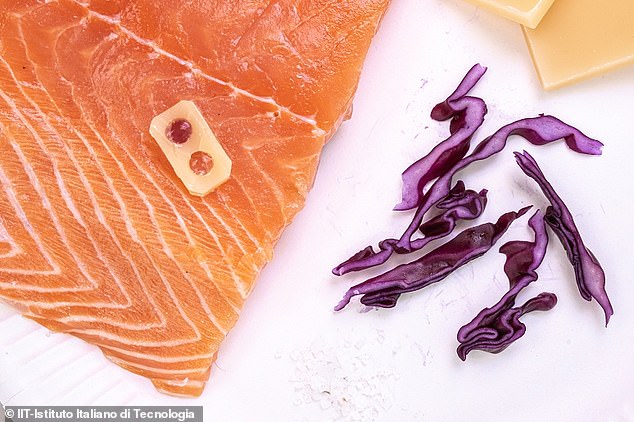 The sensor, less than an inch long, consists of a chamber made of beeswax that contains table salt and red cabbage.

THAWING FOOD AND ‘THE DANGER ZONE’

It’s called the danger zone because bacteria can multiply rapidly between these temperatures.

Because of this, consumers should not refreeze any foods left outside the refrigerator longer than two hours.

If the product has been kept at refrigerator temperatures – between 37°F (3°C) and 40°F (5°C) – cooking and eating the product should be fine.

US Department of Agriculture says: ‘If raw or cooked food is thawed in the refrigerator, it is safe to refreeze it without cooking or heating, although there may be a loss of quality due to the moisture lost through thawing.’

‘Improper freezing of food causes food waste and negatively impacts the environment,’ the researchers say in their new study, published in ACS Sensors.

‘We envision that the sensor could be especially useful for smart packaging, which can provide additional information about the product such as its storage condition history.’

It’s generally considered unsafe to eat food that has defrosted and later refrozen, due to the risk of bacterial contamination.

The researchers say repeated freezing and thawing cycles of meat ‘can significantly increase the count of many pathogenic microorganisms’.

And according to the US Department of Agriculture, consumers should not refreeze any foods left outside the refrigerator longer than two hours.

Therefore, keeping food frozen while it’s transported and stored is essential for safety reasons, as well as retaining its quality and minimising waste.

Less than an inch long, the device is essentially a ‘chamber’ of beeswax with two holes – one containing red cabbage juice and the other containing the electrolyte (water with table salt). The chamber itself is also inserted with electrodes that are made of tin, gold and magnesium.

When the meat is frozen, the salt water electrolyte is also frozen, but when temperatures rise the two start to defrost.

When the electrolyte defrosts, it sends an electrical current along inserted metal electrodes to the cabbage juice.

An electrode is an electrical conductor used to make contact with a nonmetallic part of a circuit.

An electrolyte (typically a chemical) separates the anode and cathode and moves the flow of electrical charge between the two.

‘The colours of the cabbage is due to some natural dyes, among which anthocyanins,’ he told MailOnline.

‘These dyes are known to change colour upon different stimuli. One of these is the presence of specific ions, such as tin ions.’

Researchers ensured that one of the electrodes was made of tin so that the current produced would carry tin ions with it and release the tin ions into the juice, changing its colour.

When the electrolyte is frozen, the ions cannot move, so there is no current that could take the tin ions to the juice to change its colour.

However, when temperatures rise and the electrolyte becomes liquid, the tin ions produce a ‘spontaneous flow of current’ to the hole containing the juice.

In experiments, the juice produced an ‘irreversible shift’ from reddish purple to blue when current was applied.

Caironi also said the whole device could potentially be eaten along with the food product to which it’s attached, because tin, gold and magnesium are edible and ‘non toxic if ingested up to certain specified amounts’.

While the size of electrodes in the team’s experiments are too big to be swallowed, they could be downscaled, he said. 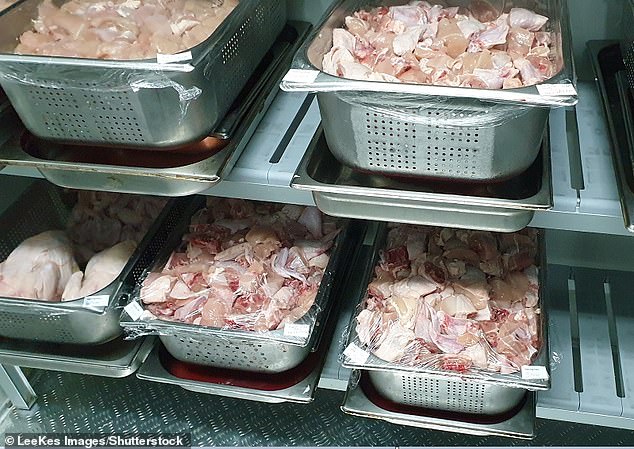 The technology could minimise the risk of food poisoning by alerting both producers and consumers when products have started defrosting. Pictured, defrosting chicken

‘Such a device can ensure that frozen food is handled correctly and is safe for consumption,’ they say in their paper.

Caironi and colleagues conclude that their sensor paves the way for edible materials to be used in ‘inexpensive and safe technology to be largely exploited in the food and drug cold supply chains’.

FROM CARBON LABELS TO CALORIE EQUIVALENTS: HERE’S THE FOOD PACKAGING OF THE FUTURE

As the world becomes more aware of the health and environmental impacts of different foods, many consumers are becoming more conscious of what goes in their trolley.

This could soon be reflected in the products themselves, as brands and retailers look to become more sustainable. 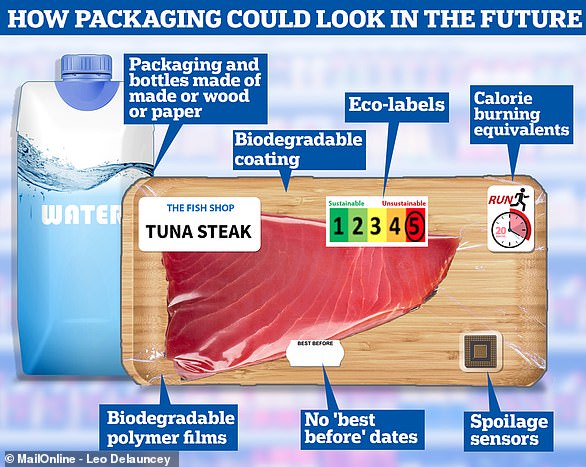 With all these new labels and materials, MailOnline takes a look at what your favourite food products could look like in the future

Scientists have already recommended ‘eco-labels’ be applied to menus to inform diners about the sustainability of their meal choices.

Another recent study saw health experts call for the inclusion of ‘calorie-burning equivalents’, that reveal how many minutes of exercise is required to burn off the product, on packaging.

Technological advances have been made in the packaging materials too, with biodegradable films and coatings already being trialled by different brands.

MailOnline takes a look at what your favourite food products could look like in the future based on these advances.