Eating plenty of cinnamon could help people with high blood sugar levels stave off diabetes, a new study has revealed.

The fragrant spice, taken from the bark of trees, improves blood sugar control in people with pre-diabetes and could slow the progression to full-blown diabetes.

In experiments in the US, cinnamon supplements with a meal were proven to lower the warning signs of diabetes after three months.

Nearly 90 million people in the US and at least seven million in the UK have pre-diabetes, which occurs when blood sugar levels are higher than normal and often leads to type 2 diabetes.

Identifying strategies to prevent the progression from pre-diabetes to type 2 is important for large populations and the cheap spice could be the key. 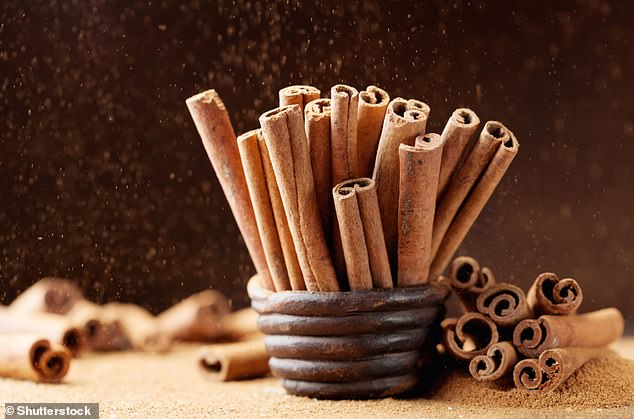 Cinnamon improves blood sugar control in people with pre-diabetes and could slow the progression to type 2 diabetes, according to a new study published in the Journal of the Endocrine Society.

Diabetes is a lifelong condition that causes a person’s blood sugar level to become too high.

There are two main types of diabetes:

– Type 1, where the body’s immune system attacks and destroys the cells that produce insulin.

– Type 2, where the body does not produce enough insulin, or the body’s cells do not react to insulin.

In the UK, around 90% of all adults with diabetes have Type 2.

‘These findings provide the rationale for longer and larger studies to address if cinnamon can reduce the risk of developing type 2 diabetes over time.’

The study looked at people with pre-diabetes, which is defined as having higher than normal blood sugar levels.

Blood sugar levels of people with pre-diabetes are not high enough to be considered type 2.

But without lifestyle changes, adults and children with pre-diabetes are more likely to develop type 2, US nonprofit medical centre the Mayo Clinic warns.

The randomised clinical trial investigated the effects of cinnamon supplementation in 51 participants with pre-diabetes.

Participants in the study were recruited from the Kyung Hee University Medical Center in Seoul, South Korea and the Joslin Diabetes Center between 2017-2018.

To be included, participants needed to be between the ages of 20 and 70 and demonstrate one of three specific abnormalities – impaired fasting glucose, impaired glucose tolerance, and an HbA1c level of between 5.7 and 6.4 per cent.

Participants were given a 500mg cinnamon capsule or a placebo three times a day for 12 weeks.

The placebo capsule was 91.5 per cent cellulose, 8.4 per cent caramel food colouring and 0.1 per cent cinnamon incense.

The researchers found that cinnamon supplements lowered abnormal fasting glucose levels and improved the body’s response to eating a meal with carbohydrates, which are hallmarks of pre-diabetes.

Cinnamon was well tolerated and was not associated with specific side effects or adverse events during the 12-week study period.

The accessibility and relative abundance of the popular spice could be a cheap and  effective treatment to prevent type 2 diabetes from developing if promoted as such.

‘The identification of safe, durable and cost-effective approaches to reduce the progression from pre-diabetes to type 2 diabetes is a clinically relevant, unmet goal,’ said Dr Romeo.

It is estimated that nearly 90 million people in the United States have pre-diabetes, which occurs when blood sugar levels are higher than normal and often leads to type 2 diabetes

‘From a similar baseline, fasting plasma glucose rose after 12 weeks with placebo but remained stable with cinnamon, leading to an between-group difference of 5 mg/dL (milligram/decilitre).’

Diabetes affects more than 460 million adults across the world, and is the seventh leading cause of disability.

It accounts for more than $320 billion (£250 million) in health care costs in the US alone.

The American Diabetes Association estimates almost 40 percent of the US population has pre-diabetes, which remains unrecognised in the vast majority of cases.

More than four million people in the UK have diabetes, with 90 percent of these cases classified as type 2.

The figure is set to rise to 5 million by 2025 because of the obesity epidemic.

The results from the study represents what would be a significant reduction for a person on the borderline of full blown diabetes.

‘Longer and larger studies should address cinnamon’s effects on the rate of progression from pre-diabetes to type 2 diabetes,’ said Dr Romeo.

The results have been published in the Journal of the Endocrine Society.

THE BENEFITS OF CINNAMON

Once traded as currency, cinnamon is now a popular and abundant household spice.

The bark is peeled and laid in the sun to dry, where it curls up into rolls known as cinnamon sticks. Cinnamon is also available in a powdered form.

Cinnamon thrives in tropical regions, where the main variety is Ceylon cinnamon from the Cinnamomum Zeylanicum plant, which comes from Sri Lanka.

The other main type is Cassia cinnamon, which has a stronger taste and is slightly cheaper. Most commercial cinnamon is a mixture of the two.

Cinnamon is thought to have many medicinal and soothing properties, and is used frequently in Chinese herbal medicine.

The distinctive smell and flavour of cinnamon comes from the essential oils contained in the bark, called cinnamaldehyde.

Cinnamon also contains large amounts of plant antioxidants that help protect the body from disease. They are found in fruits, vegetables, herbs and spices.

The antioxidants in cinnamon have been found to have anti-inflammatory effects.

Cinnamon extract has been used to alleviate gastrointestinal problems in both Eastern and Western medicine for years.

It is believed that the warmth of cinnamon increases blood flow and improves blood oxygen levels to help fight off illness.