The real Rogue One: Earth-sized planet is discovered roaming the Milky Way without a parent star

A roughly Earth-sized, ‘free-floating’ planet roaming across the Milky Way — while gravitationally unattached to any star — has been discovered, a study reported.

Astronomers from the US and Poland say that this so-called ‘rogue planet’ is the smallest ever identified to date.

While most known planets orbit a star, the team believe our galaxy may be teeming with rogue planets — possibly outnumbering the number of stars in the Milky Way.

In 2011, the team found 10 such objects — each about the size of Jupiter, far larger than the current find — that did not have a parent stars within 10 astronomical units.

One astronomical unit is equivalent to the distance between the Earth and the Sun. 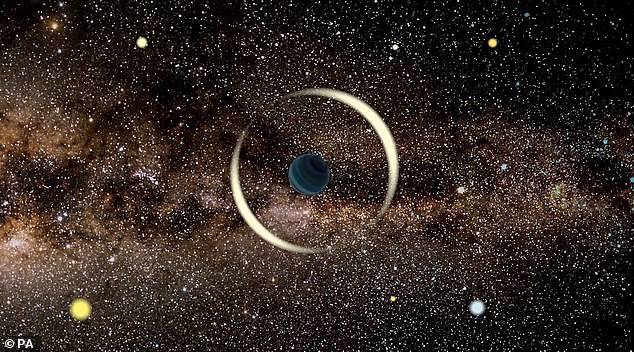 The scientists took advantage of an phenomenon known as ‘gravitational microlensing’ to spot the planet, which revealed itself by bending the light of more distant stars (as depicted)

The scientists took advantage of an astronomical phenomenon known as ‘gravitational microlensing’ to spot the planet, which revealed itself by bending the light of the more distant stars behind it.

The result was an effect that is much like a giant magnifying glass, brightening light from a background ‘source’ star to reveal the presence of the massive object.

Gravitational microlensing is only possible when an astronomer’s telescope lies in almost perfect alignment with the observed object and the source star.

‘[The] chances of observing microlensing are extremely slim because three objects — source, lens and observer — must be nearly perfectly aligned,’ said paper author and astronomer Przemek Mroz of the California Institute of Technology.

To spot the rogue planet, the researchers analysed data collected from microlensing surveys of the so-called Galactic Bulge —the central part of the Milky Way.

Astronomical data was collected by the Warsaw Telescope at the Las Campanas Observatory, in Chile.

The researchers said that the newly detected planet is the smallest rogue world ever found, with models indicating it may have a mass somewhere between that Earth and its smaller neighbour, Mars. 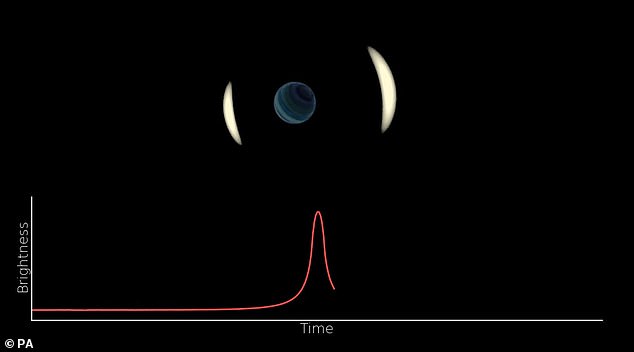 The result of the lensing phenomenon is an effect that is much like a giant magnifying glass, which brightens light from a background ‘source’ star to reveal the presence of the object

‘When we first spotted this event, it was clear that it must have been caused by an extremely tiny object,’ said paper author and astronomer Radoslaw Poleski of the University of Warsaw, in Poland.

‘We can rule out the planet having a star within about eight astronomical units.’

Astronomers believe free-floating planets may formed in the rotating discs of dense gas and dust around stars — and get violently ejected from their parent planetary systems after gravitational interactions with other bodies.

Studying these objects could enable astronomers to learn more about the turbulent past of planetary systems like our own, the team explained.

The full findings of the study were published in Astrophysical Journal Letters.

Gravitational lensing occurs when a massive galaxy or cluster of galaxies bend the light emitted from a more distant galaxy.

This forms a highly magnified, though much distorted image.

This is because massive objects bend the spacetime around them, making light travel in a different path.

This theory was first proposed by Einstein in his theory of General Relativity.