Last year was the FOURTH hottest on record: NASA confirms we’re now in the warmest half-decade in over 120 years

NASA has revealed that 2018 was officially the fourth hottest year on record.

Scientists at NASA’s Goddard Institute for Space Studies (GISS) in New York say this makes the past five years the warmest half-decade period on record.

Based on Australia’s scorching January and the extreme colds felt in the US in the past month, global warming looks set to continue to break records in 2019 and beyond, scientists claim.

Eighteen of the hottest 19 years have occurred since 2001.

‘2018 is yet again an extremely warm year on top of a long-term global warming trend,’ said GISS Director Gavin Schmidt.

Since records began the average global temperature has increased by approximately 2°F (1°C).

Experts have said that the prolonged period of time Earth has experienced the hottest years is more important than individually ranking each year itself.

‘The long-term temperature trend is far more important than the ranking of individual years, and that trend is an upward one, ‘ said World Meteorological Organisation Secretary-General Petteri Taalas.

‘The 20 warmest years on record have been in the past 22 years. The degree of warming during the past four years has been exceptional, both on land and in the ocean.

‘Temperatures are only part of the story. Extreme and high impact weather affected many countries and millions of people, with devastating repercussions for economies and ecosystems in 2018.

‘Many of the extreme weather events are consistent with what we expect from a changing climate. This is a reality we need to face up to. Greenhouse gas emission reduction and climate adaptation measures should be a top global priority.’

The industrial revolution kickstarted a process of carbon dioxide emissions which has seen human activities pump greenhouse gases into the atmosphere.

This warms the atmosphere and, consequently, the planet’s surface. 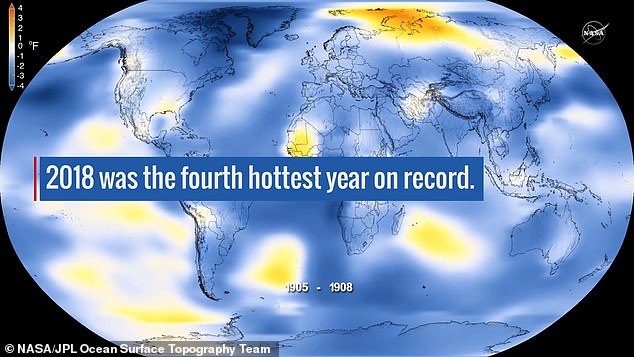 Last year came in fourth since records began in the 1880s, falling behind only 2015, 2016 and 2017. Scientists at NASA’s Goddard Institute for Space Studies (GISS) in New York say this makes the past five years the warmest years in the modern record

Since records began the average global temperature has increased by approximately 2°F (1°C). The industrial revolution kickstarted a process of carbon dioxide emissions which has seen human activities pump greenhouse gases into the atmosphere

Global weather patterns cause the planet to warm unevenly, and as a result, the contiguous US 48 states recorded only the 14th hottest year on record, according to the NOAA.

Global actions are in place to limit the surging temperatures.

The most high-profile is the Paris Agreement, an international effort ratified in 2015 to limit climate change.