Earth is on the brink of having more man-made ‘stuff’ than living things: World’s plants, animals and humans will be outweighed by concrete, asphalt and bricks in 2020, study finds

The world will soon consist of more ‘stuff’ made by humans than it does living things, according to new research.

It reveals the world’s biomass in 2020 is likely to be exceeded by the cumulative amount of concrete, bricks, metals and other materials people have manufactured.

Human-generated mass is expected to exceed 3 teratonnes by 2040 if current trends continue, the study warns.

So-called anthropogenic mass has increased rapidly since 1900, when it equated to just three per cent of total biomass.

Since the dawn of the 20th century however, the explosion of industrial activity saw human-made items double in mass every 20 years. 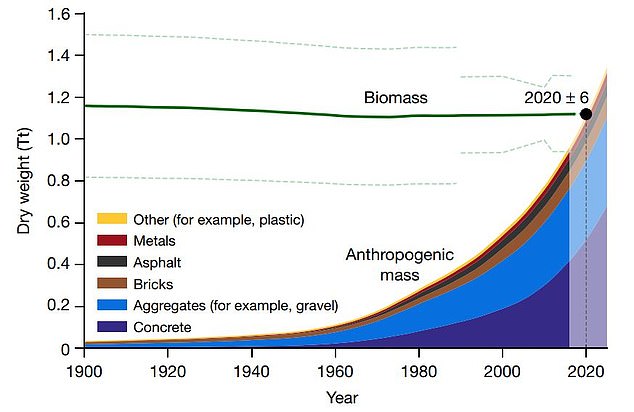 Pictured, the amount of man-made items made every year in teratonnes since 1900. Researchers believe the dry wight of the world’s biomass (greenline) is around 1.1 teratonnes and this was likely reached in 2020 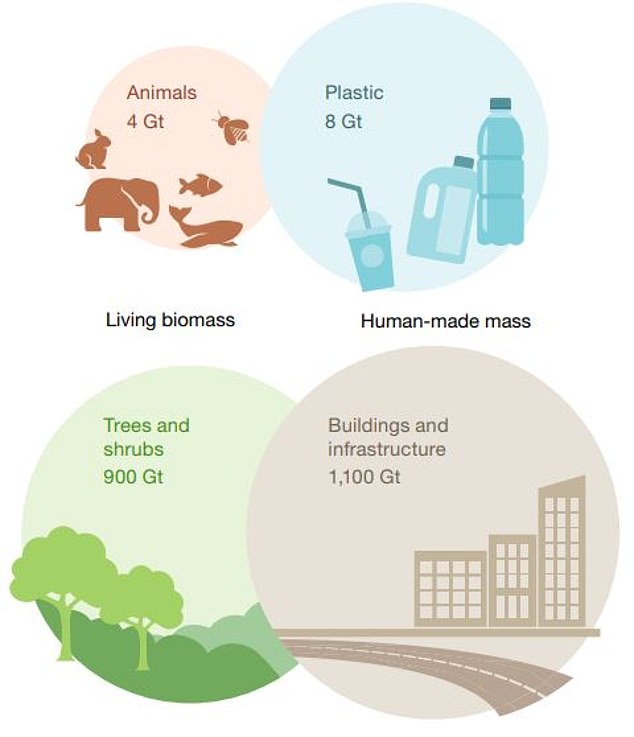 Researchers were unable to put the entirety of the world’s items on a giant sale and weigh them, so instead used computer models to predict the current and historical mass of all things on Earth dating back to 1900. Pictured are current estimates of mass for trees, animals, infrastructure and plastic

Researchers from the Weizmann Institute of Science in Israel were unable to put the entirety of the world’s items on a giant scale and weigh them, so instead used computer models to predict the current and historical mass of all things on Earth dating back to 1900.

It revealed the amount of biomass has declined over the last 120 years, but this is slight in comparison to the exponential increase in man-made items.

The best estimate for the amount of living things on planet Earth is around 1.1 teratonnes, according to the data.

Scientists mapped the total estimates of anthropogenic mass — which does not account for waste — and plotted it on a graph.

They then overlaid the data showing the amount of biomass in the world, which includes plants, trees, humans and animals.

The two lines overlapped at 2020, indicating this year is when the scales tipped away from Mother Nature and in favour of humankind.

Concrete currently accounts for more than 40 per cent of all annual anthropogenic mass, the study shows, with 549 gigatonnes (Gt) produced every year.

Over the last century, it has steadily accounted for more of the overall output. For example, in 1980, 86Gt of concrete was made, around a quarter of all mass. 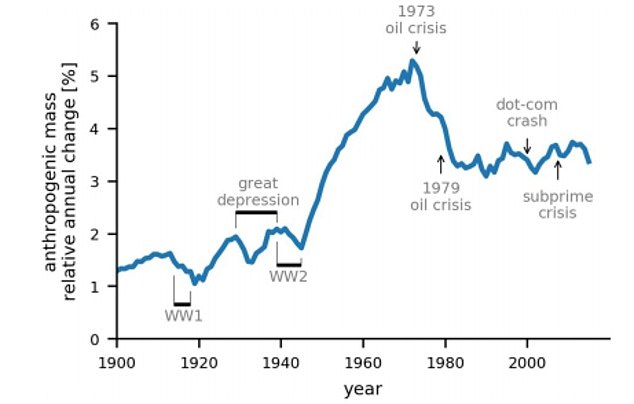 Historical analysis shows that the longest period of continued year-on-year increases to the amount of human-made mass occurred between 1945 — the end of the Second World War, and the oil crisis of 1973. Notable dips in annual anthropogenic outputs also occurred during World War One, the Great Depression and the dot-com crash (pictured)

Aggregates such as gravel are the next biggest contributor, accounting for 386Gt in 2020.

Bricks accounted for almost a quarter of all man-made mass in 1900, but this proportion has dwindled over time and now is less than ten per cent, estimates say.

Asphalt however has steadily increased since its emergence in the 1930s, with the world’s swelling road infrastructure and a desire for everywhere to be reachable by car driving demand.

Historical analysis shows that the longest period of continued year-on-year increases to the amount of human-made mass occurred between 1945 — the end of the Second World War, and the oil crisis of 1973.

Notable dips in annual anthropogenic outputs also occurred during World War One, the Great Depression and the dot-com crash.

The researchers used a baseline of dry biomass and compared it to human-made mass, but not waste.

When waste was included, the data reveals human-made mass and waste exceeded dry biomass by 2013.

However, the total figure for the world’s wet biomass is believed to be around 2.2 terratonnes.

Human-made mass will exceed this by 2037, the study predicts, but when including waste as well the timeline jumps forward to 2031.

The full findings are published in Nature.

Humans used a year’s worth of natural resources in 2020 by August 22 – a calendar event known as Earth Overshoot Day.

The annual date marks the point at which humanity has used all the biological resources that the Earth can regenerate during that year.

Due to the lockdowns imposed because of the coronavirus pandemic, and the resulting cuts in human activity, Earth Overshoot Day is 23 days later this year than it was in 2019.

But experts are warning that much more action is needed to reduce our ecological footprint and ensure we avoid ‘the direst predictions’ for humanity.

Humans currently use 60 per cent more biological resources than can be renewed – as much as if we lived on 1.6 planets – and is on track to require the resources of two planets before 2050.

‘Covid-19 has been one of the most profound events in living history – the entire world literally stopped,’ said Tessa Clarke, co-founder of sustainability brand OLIO.

‘And yet this only pushed back Earth Overshoot Day by three weeks.

‘It’s clear we need a complete overhaul of how we consume and live in the world to make significant progress in bringing the date forward so that humanity can once again exist in equilibrium with the planet.’