Early birds survived the massive asteroid that killed the dinosaurs because they had big brains, study finds

Sometimes, it’s good to be a ‘bird brain.’

Nearly 75 percent of all life on Earth, including the dinosaurs, were wiped out by the massive asteroid that hit the planet 66 million years ago, but a new study suggests that ancient birds may have survived the cataclysmic collision thanks to their evolving complex brains.

A new study suggests early birds may have survived the asteroid impact that killed the dinosaurs because of complex brains. A 70-million-year-old Ichthyornis fossil (pictured) shows the early bird had a small large forebrain, unlike modern-day birds 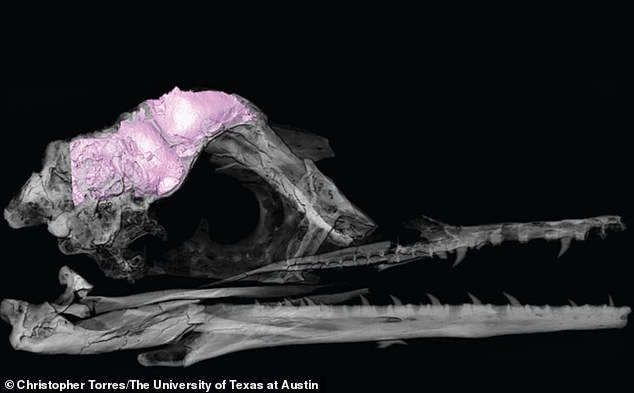 A newly discovered, well-preserved, Ichthyornis fossil shows that the early bird, had a small large forebrain, similar to Archaeopteryx, but dissimilar to modern-day birds, which have large forebrains.

‘Living birds have brains more complex than any known animals except mammals,’ said the study’s lead author, Christopher Torres, in a statement.

‘This new fossil finally lets us test the idea that those brains played a major role in their survival.’

‘If a feature of the brain affected survivorship, we would expect it to be present in the survivors but absent in the casualties, like Ichthyornis,’ Torres added. ‘That’s exactly what we see here.’

WHAT IS THE ICHTHYORNIS DISPAR?

The Ichthyornis was a toothy, tern-like seabird with a 60-centimetre wingspan, which lived around 100 to 66 million years ago in what is now North America.

Ichthyornis is uniquely situated in the fossil record, being closely related to modern birds but retaining many ancestral features, including sharp, curved teeth.

Although it was first discovered back in 1870, the heads of the first specimens were incomplete and badly crushed.

New fossils currently under study are much better preserved and three-dimensional, including one extraordinarily complete skull, experts say.

The authors used high-resolution three-dimensional scans to reconstruct the head of the bird.

This involved each bone being reconstructed by taking extremely thin cross-sectional images all the way through the bone.

The 70-million-year-old fossil showed that Ichthyornis’ brain had more in common with nonavian dinosaurs than living birds, as its cerebral hemispheres were considerably smaller. 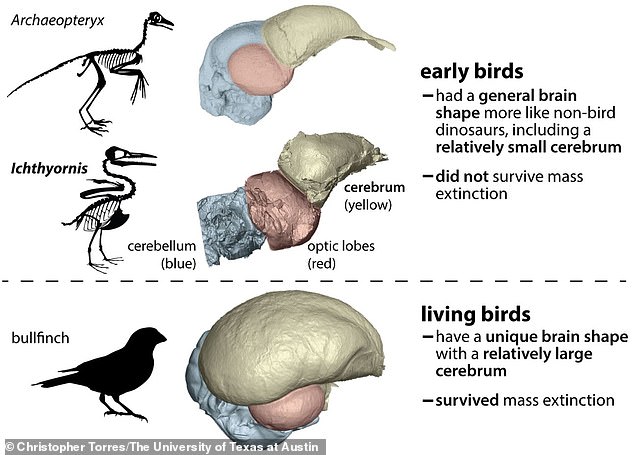 The experts theorize that it’s this key trait, the larger cerebral hemisphere, spread above the optic lobes, that may have helped modern birds stave off going extinct.

The earliest known bird was Archaeopteryx and there were roughly a dozen or so bird species that lived between the Cretaceous-Paleogene mass extinction (K-Pg) event that caused the Chicxulub crater, but until now, scientists did not know how their brains operated.

The well-preserved ‘nearly complete skull’ Ichthyornis skull changes all that.

‘Usually one of the first things that happens is the skull gets crushed,’ Torres told ABC News. ‘What makes our new specimen of Ichthyornis so special is that it preserves a nearly complete skull.’

It’s likely there may have been other factors that helped the ancestors of modern birds survive, but a larger cerebral hemisphere likely allowed birds to change their behavior in response to the asteroid and the subsequent changes to the climate.

‘Ichthyornis is key to unraveling that mystery,’ said Julia Clarke, a professor at the UT Jackson School of Geosciences and co-author of the study.

‘This fossil helps bring us much closer to answering some persistent questions concerning living birds and their survivorship among dinosaurs.’

The research was published last month in journal Science Advances.

In 2018, a 100-million-year-old Ichthyornis fossil revealed that the first bird beaks had teeth.

KILLING OFF THE DINOSAURS: HOW A CITY-SIZED ASTEROID WIPED OUT 75 PER CENT OF ALL ANIMAL AND PLANT SPECIES

Around 65 million years ago non-avian dinosaurs were wiped out and more than half the world’s species were obliterated.

The asteroid slammed into a shallow sea in what is now the Gulf of Mexico.

Around 65 million years ago non-avian dinosaurs were wiped out and more than half the world’s species were obliterated. The Chicxulub asteroid is often cited as a potential cause of the Cretaceous-Paleogene extinction event (stock image)

But while the waves and eruptions were  The creatures living at the time were not just suffering from the waves – the heat was much worse.