Is THIS why Attila’s Huns attacked the Roman Empire? Hunnic people became violent raiders in response to severe DROUGHT in the Danube, study claims

Drought encouraged Attila and his Huns to violently attack the Roman Empire in the 5th century, a new study suggests.

Researchers have analysed climate data based on tree rings that provides information about yearly changes in climate over the last 2,000 years.

Results reveal that Hunnish territory in Eastern Europe experienced episodes of unusually dry summers and ‘severe drought spells’ in the 430s and 450s.

This caused ‘inexplicable violence’ from the Huns towards the Romans, possibly to raid and steal their livestock or seize arable Roman land. 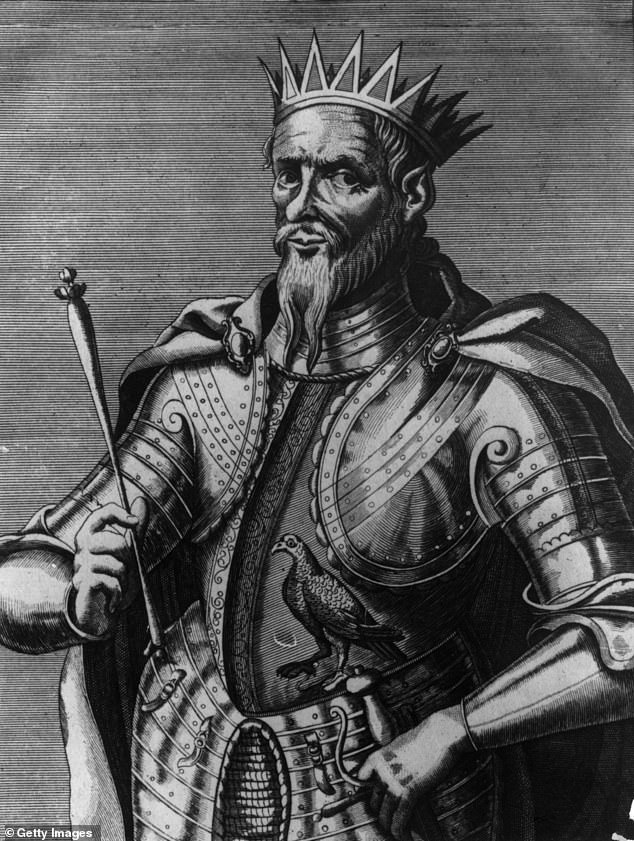 Attila (c.406 – 453) was king of the Huns, a nomadic Asian people who terrorised the Roman Empire. Drought encouraged Attila’s Huns to attack the Roman Empire, a new University of Cambridge study suggests 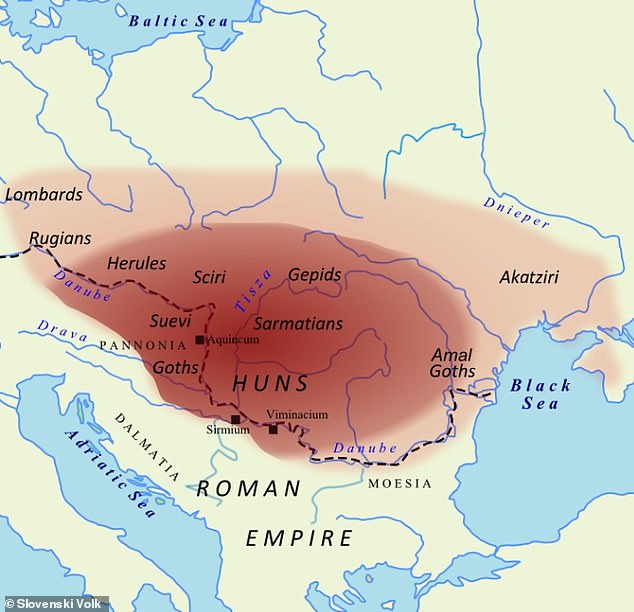 The Huns were the nomadic people of Central Asia and Eastern Europe. This map shows the territory under Hunnic control circa AD 450

Attila the Hun, considered one of the most powerful warriors in world history, was the ruler of the Huns (the nomadic people of Central Asia and Eastern Europe) from AD 434 until his death in 453.

Also known as the Scourge of God, he began his rule by slaughtering Goth tribes in modern-day Germany and Austria, then attacked the enfeebled Roman Empire.

Atilla ruled territories from Germany to the Caspian Sea for almost 20 years, but he reached an undignified end in his mid-40s in March 453.

On his wedding night, he drank heavily and passed out before choking to death on his own blood, either due to a nosebleed, a rupture or something else. There’s also speculation his new wife, Ildico, murdered him.

What happened to his body and where it lies today is unknown, although the sole surviving written source about his funeral suggests his tomb was fit for a king.

It may be located on the Hungarian Puszta (also known as the Great Hungarian Plain), László Veszprémy, a professor at Pázmány Péter Catholic University in Budapest, told Live Science.

Attila the Hun, considered one of the most powerful warriors in history, ruled the Huns (the nomadic people of Central Asia and Eastern Europe) from AD 434 until his death in 453.

Also known as the Scourge of God, he began his rule by slaughtering Goth tribes in modern-day Germany and Austria, then attacked the enfeebled Roman Empire.

The new study was led by researchers at the University of Cambridge and published in the Journal of Roman Archaeology.

They claim the Huns’ ‘apparently inexplicable violence’ towards the Romans may have been a strategy for coping with climatic extremes.

‘Hunnic incursions into eastern and central Europe in the 4th and 5th century have historically been considered one of the key factors in bringing the Roman Empire to an end,’ they say in the paper.

‘The violence of the Hunnic elites that was so dramatically recorded in late Roman written sources could thus have been a consequence of climatic fluctuations.’

Chemical characteristics of the rings inside a tree can reveal what the weather conditions were like during each year of that tree’s life.

The study was based on analysis of 21 living and 126 relict oak trees that grew in what is today the Czech Republic and southeast Bavaria – adding up to 27,080 individual measurements of tree rings.

Analysis of carbon and oxygen isotopic signatures (delta C13 and delta O18) then made it possible to reconstruct past climates.

Unfortunately, written sources provide little information about what motivated the Huns to attack the Roman provinces, but the study links it with climate.

Results show that climatic fluctuations – in particular drought spells from AD 420 to 450 – would have reduced crop yields and pasture for animals beyond the floodplains of the Danube and Tisza rivers where the Huns were based.

The study argues that the most devastating Hunnic incursions of AD 447, 451 and 452 coincided with extremely dry summers in central Europe’s Carpathian Basin. 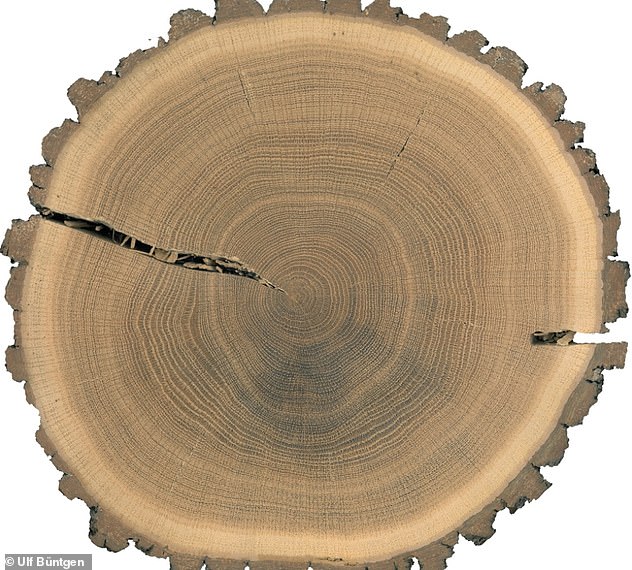 Example of a polished cross-section of an oak from the Czech Republic. Researchers studied ‘chemical fingerprints’ – carbon and oxygen isotopes – in living and dead European oak trees to reconstruct summer climate 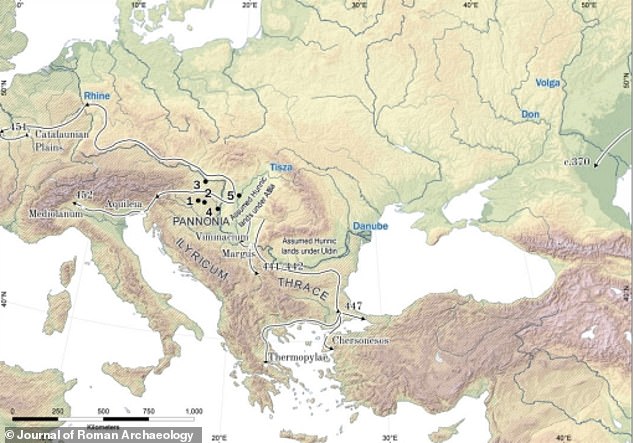 This map shows historically recorded locations of Hunnic activity. The arrows indicate the assumed routes of the main Hunnic raids

Hungary and the Huns

It’s a common misconception that the Huns were named after Hungary.

The name Huns comes from the Greek word Ounnoi and has nothing to do with modern Hungary.

‘Written sources are not that detailed,’ Dr Susanne Hakenbeck at Cambridge told MailOnline.

‘But we think that during the fifth century the Huns were first based in modern Romania north of the lower Danube, and then they moved to what is today Hungary.’

These climate changes would likely have increased raiding activity in the region on the Romans, study author Dr Susanne Hakenbeck at Cambridge told MailOnline.

‘Drought made it difficult for the Huns to maintain large animal herds, which is what they had relied on when we first hear of them in the fourth century,’ she said.

‘It is possible – though we have no evidence for this – that one aim of the raids was to acquire food and livestock.

‘Livestock raiding is quite common among populations of animal herders.’

The Huns also made huge demands for gold and, at one point, demanded a strip of land along the Danube that was ‘five days’ journey wide’.

‘We can be fairly sure Attila demanded gold so that he could keep his war bands loyal and in the manner to which they had become accustomed,’ Dr Hakenbeck said.

‘Even Attila’s demand for an extensive strip of land along the Danube can perhaps be seen as a coping strategy, since land in the floodplain would have offered better grazing in a time of drought.’

Traditionally, the Huns have been cast as violent barbarians driven by an ‘infinite thirst for gold’.

But historical sources documenting these events were primary written by elite Romans with little direct experience of what they described, the study also claims.

Originally, Roman and Hun diplomacy was extremely complex but with ‘mutually beneficial’ arrangements resulting in Hun elites gaining access to vast amounts of gold – but climate could have changed this. 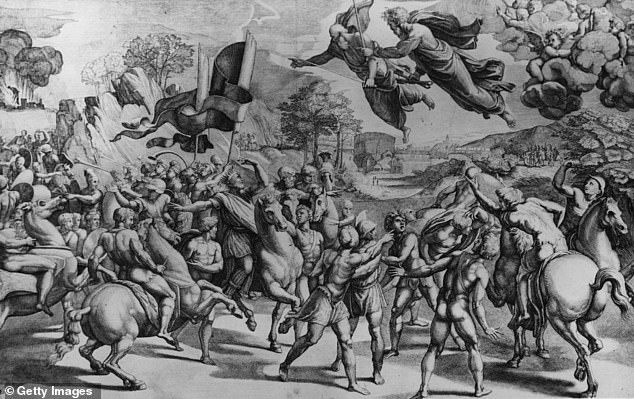 ‘This system of collaboration broke down in the 440s, leading to regular raids of Roman lands and increasing demands for gold,’ the study says.

Ultimately, within a few decades of the violent attacks, the Huns ceased to be a major threat to Rome and lost much of their territory.

In AD 453, Attila died suddenly, having choked to death by blood from a nosebleed.

‘This led to internecine fights for supremacy among Attila’s sons, and in 454, the Huns were finally defeated in battle at the river Nedao,’ the team say.

‘By the 470s, the Huns were no longer a significant force.’

MailOnline reveals the ancient tombs that STILL remain a mystery

WHO WERE THE HUNS AND HOW DID THEY DEFEAT THE ROMANS?

The Huns were a nomadic community originating in Central Asia.

They travelled to Europe and threatened what was left of the Roman Empire.

It is likely they fled from a dry period in Asia. Searching for food and water, they conquered as they went.

By 216 AD – when their territory was split into five successor states – the Huns had extended their area of control north to Siberia, south to Tibet, east to the Pacific Ocean and west to the Caspian Sea.

The herders’ diet was high in meat and fish. 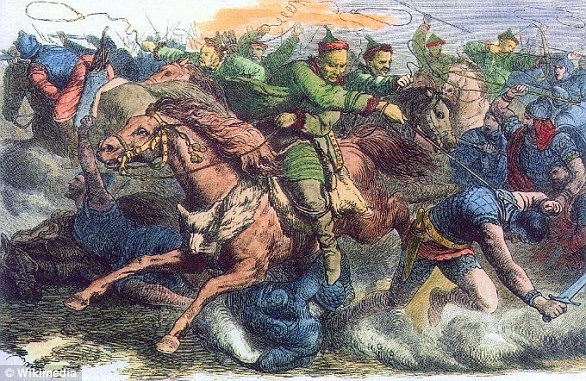 The Roman Empire collapsed because of terrifying Huns attacking its eastern frontier around the fourth century AD. Pictured is an artist’s impression of a battle between Roman and Hun solider

The Huns also ate lots of millet, which has a distinctive chemical signature that can be identified in human bones.

The wandering Huns grew millet as it it grows in a few short weeks.

Agriculture was considered the foundation of Roman civilisation, and the Romans had a big problem with the Huns as they didn’t engage in farming, choosing instead to live a nomadic lifestyle.

The Roman Empire collapsed because of terrifying Huns attacking its eastern frontier around the fourth century AD.

Roman accounts of the Huns tell largely of terror and destruction: The group fought on horseback using longbows to attack their enemy, and were renowned for their savagery and blood-curdling war cries.

‘Barbarian’ tribes quickly moved into the power vacuum in Europe created by the decline of the Roman Empire.

These include the Huns, Franks, Vandals, Saxons and the Goths.