Anti-viral coatings for doorknobs that kill coronavirus in SECONDS ‘could be on the market in weeks’, expert hopes

Self-cleaning and anti-viral doorknobs that are able to kill the coronavirus in seconds could be a reality in the coming weeks.

Dr Felicity de Cogan of the University of Birmingham revealed today that engineers are creating surfaces capable of rapidly neutralising the SARS-CoV-2 virus.

Speaking at an online press conference, Dr de Cogan said the materials could be ready for the market in the coming weeks.

However, she admitted it is more realistic they would be finished by Christmas. 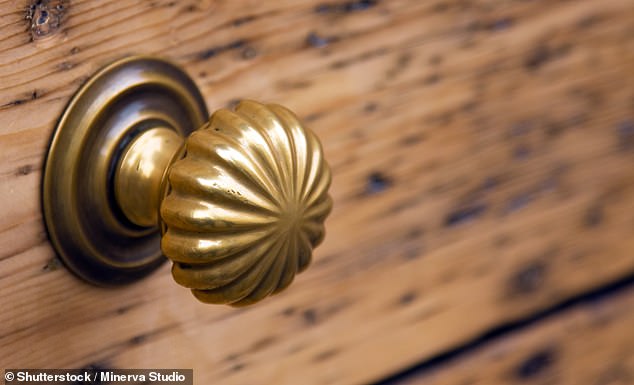 Dr de Cogan said copper and silver have already shown promise when it comes to this. She says studies have found they are 99 per cent effective after 2-6 hours. Some countries have started coating surfaces regularly used by lots of people in the metal (stock)

Dr de Cogan, founder of NitroPep infection-resistant coatings and an enterprise fellow at the Royal Academy of Engineering, said there is already some progress being made in this field.

‘Surfaces are really important in the fight against COVID-19 and if we can clean surfaces we can stop the spread of disease,’ she said.

‘People can either clean surfaces manually, or we can create more self-cleaning materials.

‘A self-cleaning surface, I believe, is a much stronger prospect as they need no maintenance, work continuously and don’t require people to change their behaviour.

‘We cant really clean surfaces quick enough ourselves and the existing self-cleaning surfaces can only destroy the virus after several hours, but think of how many people touch a train handrail in a matter of minutes.

‘Self cleaning surfaces are designed to release, or permanently be, anti-microbial. So it continuously kills pathogens.’

SARS-CoV-2, the virus causing the COVID-19 pandemic ravaging the world, can survive on surgical face masks for up to seven days, scientists claim.

The novel coronavirus is being rapidly studied to understand how long it remains contagious on various surfaces and under certain conditions.

A piece of research from Hong Kong found ‘a significant level of infectious virus could still be detected on the outer layer of a surgical mask’ after seven days.

But researchers from the US report no viable SARS-CoV-2 was measured after 24 hours on cardboard, indicating using the postal service is relatively risk-free.

Printing paper — including newspapers — kills the virus in three hours and experts have today announced the likelihood of infection from goods that have been transported is low.

A piece of research published online at medRxiv, a pre-print site where research is posted before it has been scrutinised before other academics in a process known as peer-review.

But the initial findings from Alex Chin and colleagues at the University of Hong Kong found the virus was highly stable for an extended period at 4°C.

At room temperature it can survive at high levels for seven days if untreated, but will be eradicated after 14 days.

Surface transmission is one of three main ways that scientists think the coronavirus can spread – along with direct human-to-human transmission via large droplets produced when coughing or sneezing and smaller airborne droplets.

Dr de Cogan said copper and silver have already shown promise when it comes to  killing the virus, meaning that people who touch these surfaces are unlikely to pick it up on their hands.

She says studies have found that even non-engineered metal is 99 per cent effective at killing the virus after 2-6 hours.

William Keevil, a senior microbiologist at the University of Southampton, has previously called for door handles, shopping trolleys, handrails on public transport, and even gym equipment to be coated in the metals.

Professor Keevil told The Times recently that buses in Poland had already been fitted with copper-plated handrails, while airports in Chile and Brazil immigration kiosks were coated in the metal.

He said gyms in America — which are teeming with bacteria and other infectious germs — had even covered barbells and other equipment with copper.

It is well known that copper has inherent antimicrobial properties but Dr de Cogan says the time-frame that it does this in is insufficient at preventing the spread of coronavirus in the community.

A British company called Copper Clothing, which is selling a ‘Washable and Reusable Copper Infused KN99 Face Mask’ for £29.99, claims it has the technology to potentially destroy the virus on a surface almost instantly.

Rory Donnelly, head of research and development at Copper Clothing, told MailOnline the firm has engineered copper to destroy SARS-CoV-2.

The fabric is currently incorporated into fabrics, such as cotton, and can be used to make face masks as well as gloves, bed-sheets and even a smartphone impervious to microbial infection.

Mr Donnelly told MailOnline: ‘Copper in our material is so close together that ions can easily transmit electrical signals. In engineered copper fabrics this can happen in under a minute.

‘If a microbe lands on that, the copper goes into “schizophrenic mode” and sends electrical signals to each other which is like a human walking into an electric fence.

‘It destroys the envelope surrounding the virus and this instantly kills it.’

Previous research found ‘a significant level of infectious virus could still be detected on the outer layer of a surgical mask’ after seven days.

While researchers from the US report no viable SARS-CoV-2 was measured after 24 hours on cardboard.

Printing paper — including newspapers — kills the virus in three hours while cloth and steel can harbour the virus for up to two and seven days, respectively.

Dr de Cogan says it is essential a surface is created which can ‘kill the virus in seconds to minutes’.

Speaking today she said she is confident a product capable of this will be on the market by Christmas, if not much earlier.