Doomsday prediction for surging tides was WRONG: Study claims ice-cliffs of Antarctica will be responsible for just a 6-inch boost in sea levels – SEVEN times less than previously thought (but it will still cause ‘climate chaos’)

Predictions of an imminent and catastrophic surge in sea levels were incorrect and overestimated, a new study has found.

The difference between the two predictions stems from disagreement as to how significant the melting of the Antarctic ice-cliffs will be to global levels.

New research says there is only a five per cent chance that the Antarctic ice-cliff melting will contribute more than 15 inches (39 cm) to global sea levels by 2100.

The latest study found that, by the end of this century, global sea levels will rise by a grand total of less than four feet (120 cm), noticeably less dramatic than the doomsday predictions of a 2016 paper from US-based scientists that estimated it would exceed 6.5 feet (two metres).

But, a separate study published by the same scientists found future generations still face a significant fallout from global warming and wilder weather due to ‘climate chaos’ – even if the previous doomsday prediction was inaccurate. 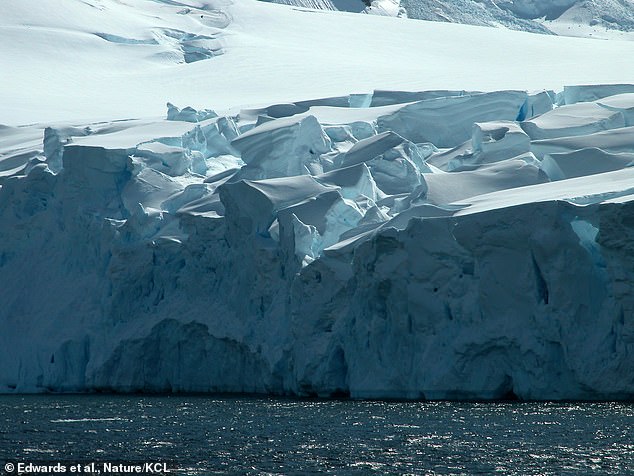 Predictions of an imminent and catastrophic surge in sea levels were incorrect and overestimated, a new study has found. The difference between the two predictions stems from disagreement as to how significant the melting of the Antarctic ice-cliffs (pictured) will be to global levels

Dr Tamsin Edwards, lecturer in physical geography at King’s and lead author of the study published in Nature, said: ‘Unstable ice cliffs in Antarctica were proposed as a cause of unstoppable collapse of large parts of the ice sheet in the past.

‘They were, therefore, also predicted to cause rapidly rising seas with global warming in our near future. But we’ve re-analysed the data and found this isn’t the case.’

This would take the combined total for sea level rise to a grand total of 47 inches (120 cm), far less than the previous estimate of more than two metres.

The team included researchers from King’s College London, Victoria University of Wellington, and colleagues across the US, Canada, UK and Europe.

They looked at ice loss dating back three million years, 125,00 years and the last 25 years.

It was discovered that  collapsing ice-cliffs aren’t needed to reproduce sea level rises in the past. 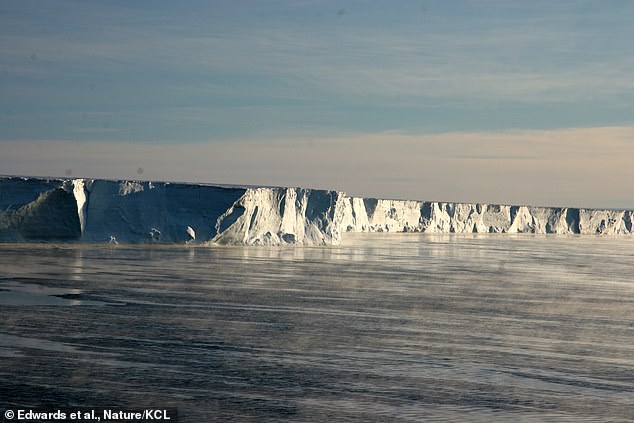 New research says there is only a five per cent chance that the Antarctic ice-cliff melting will contribute more than 15 inches (39 cm) to global sea levels by 2100. Previous estimates stated it could contribute a huge 44 inches (1.14 metres) alone – more than seven times the revised value of between 5.5 – 6 inches (14 – 15 centimetres) 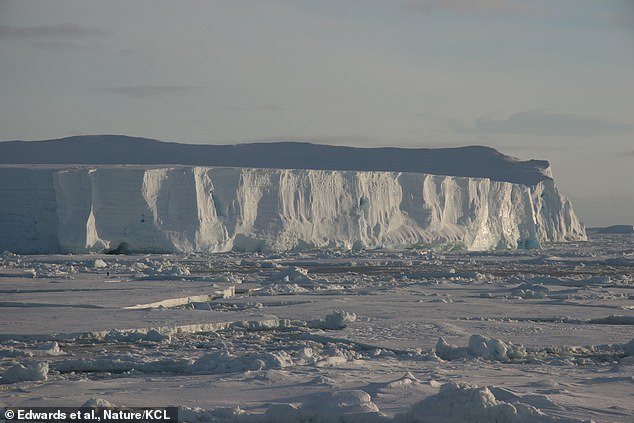 The latest study found that, by the end of this century, global sea levels will rise by a grand total of less than four feet (120 cm), noticeably less dramatic than the doomsday predictions of a 2016 paper from US-based scientists that estimated it would exceed 6.5 feet (2 metres)

Dr Edwards, says: ‘We’ve shown that ice-cliff instability doesn’t appear to be an essential mechanism in reproducing past sea level changes and so this suggests “the jury’s still out” when it comes to including it in future predictions.

‘Even if we do include ice-cliff instability, our more thorough assessment shows that the most likely contribution to sea level rise would be less than half a metre by 2100.’

A second paper, led by associate Professor Nick Golledge from Victoria University of Wellington and co-authored by Dr Edwards, found that while previous models had overestimated the impact of Antarctic ice cliff loss, they had underestimated the impact importance of melting ice sheets in Greenland and Antarctica as a whole.

Water from melting Greenland and Antarctic ice sheets is likely to have a major effect on ocean currents and temperatures by the end of the century, the study found.

This melting is expected to lead to extreme and unpredictable weather events, such as severe heatwaves and cold snaps, flash floods and hurricanes.

Dr Nick Golledge said: ‘Under current global government policies, we are heading towards three or four degrees of warming above pre-industrial levels, causing a significant amount of melt water from the Greenland and Antarctic ice sheets to enter Earth’s oceans.

‘According to our models, this melt water will cause significant disruptions to ocean currents and change levels of warming around the world.’

The team combined detailed simulations of melting climate effects with satellite observations of recent changes to the ice sheets.

The models suggested that sea levels were likely to rise fastest between 2065 and 2075.

Critically, melting ice flowing from land to sea would affect temperatures and circulation patterns in the world’s oceans.

The influx of melt water was expected to weaken the Gulf Stream, bringing warmer air to the high Arctic, Eastern Canada and Central America, and cooler temperatures to north-western Europe.

Temperature variability would increase in both the atmosphere and the oceans, resulting in more frequent extreme weather events.

Dr Golledge added: ‘Melt from these ice sheets is going to significantly disrupt the global climate making temperatures in some areas vary much more from one year to the next.

‘This unpredictability is going to prove extremely disruptive for all of us, and will make adaptation and planning much more difficult.’

HOW MUCH WILL SEA LEVELS RISE IN THE NEXT FEW CENTURIES?

The report also found that every five years of delay beyond 2020 in peaking global emissions would mean an extra 20 centimetres (8 inches) of sea level rise by 2300.