In the 1969 children’s book “The Very Hungry Caterpillar,” the tiny protagonist spends a week snarfing his way through a smorgasbord of fruits, meats, sugary desserts and, finally, a nourishing leaf. This family-friendly tale was missing one crucial and far less G-rated plot element: the pure, unadulterated rage of an insect unfed.

When food gets scarce, monarch butterfly caterpillars will turn on each other, duking it out for the rights to grub, according to a paper published Thursday in the journal iScience. The jousts don’t get bloody. But they involve plenty of bumping, boxing and body-checking — all the makings of a big brawl of babies, in a hurry to bulk up before they sprout their grown-up wings.

“I went to grad school with a guy who played rugby in college,” said Alex Keene, a neuroscientist at Florida Atlantic University and an author on the study. “A flying head butt is a fair assessment.”

The study offers an in-depth look into the underappreciated phenomenon of caterpillar aggression. It could also aid entomologists racing to preserve monarchs and the milkweed plants they depend on, as populations of the fragile species continue to plummet.

“It’s interesting to think about how this would potentially impact the survival of these caterpillars, when they’re crowded onto plants,” said D. André Green, a monarch butterfly biologist at the University of Michigan who wasn’t involved in the study. “The amount of milkweed is decreasing. This may become a bigger issue.”

Dr. Keene, who typically researches the behavior of fruit flies and cave fish, was first inspired to tackle the project after he and his wife noticed two monarch caterpillars tussling on a milkweed plant in his backyard. (His spouse, he admitted, gets first credit for spotting the feud.) 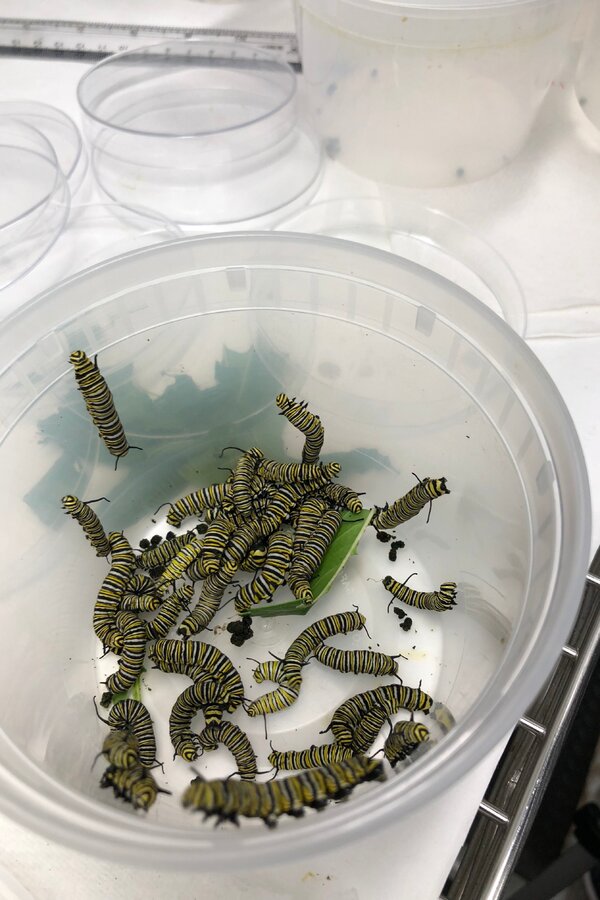 The altercation made a lasting impression on Dr. Keene, who scoured the internet for scientific data documenting these milkweed melees. There was nothing. So he and his colleagues decided to fill the gap themselves.

In the lab, they placed caterpillars in groups of four in tiny arenas with varying amounts of milkweed leaves. The less milkweed, the more the wriggling insects squabbled.

“Some would just roam off and eat,” said Elizabeth Brown, a biologist in Dr. Keene’s lab. But if an insect spotted a morsel of food that was being monopolized by another, it would “rear up and, with their head, make a lunge onto the body of the other caterpillar,” she said.

Sometimes the strikes landed near the recipient’s head. In other cases, it was a bit more like “a punch in the gut,” Dr. Brown said. Either way, the battered caterpillar would usually skulk away in defeat, freeing up the milkweed for the voracious victor.

That’s a “huge consequence” for the loser, Dr. Keene said, because at this stage in their life, the larva are “basically eating constantly.” Newly hatched caterpillars are born famished, and as they balloon in size, can strip entire plants bare of leaves in a matter of days.

The older and larger the caterpillars got, the more their disdain for sharing grew, the researchers found. The greatest number of scuffles occurred among bugs in the final stage before metamorphosis, when the stakes of milkweed munching were probably especially high.

Juxtaposed against the docile reputation of most butterflies, the study’s findings may be a bit disorienting. “We think about monarchs as being these beautiful, dazzling creatures that fly around and pollinate flowers and lay eggs,” said Adriana Briscoe, a butterfly researcher at the University of California, Irvine, who wasn’t involved in the study. “We don’t usually think of them as having this sort of darker underbelly.”

But even adult monarchs, especially males, can get a bit quarrelsome when their territories are under threat, Dr. Green said. Crammed into tight quarters, their younger, flightless counterparts might have all the more reason to engage in the occasional kerfuffle.

Dr. Green and Dr. Briscoe both pointed out that the study’s findings were restricted to the laboratory, leaving open the possibility that the caterpillar carnage the researchers witnessed might differ in the wild, where there’s more room to roam.

“It would be fun to see this replicated in outdoor cages,” Dr. Briscoe said. But given the relative absence of very hangry caterpillars in the scientific record so far, “this is a good start.”