Dirty 16,000-year-old dishes reveal that Siberian hunters cooked hot meals of fish and bone marrow to help them survive the harshest seasons of the ice age

Dirty 16,000-year-old dishes have revealed that Siberian hunters cooked hot meals of fish and bone marrow to help them survive the harshest seasons of the ice age.

Researchers analysed ancient fats and lipids that had been preserved on 28 pottery sherds from ice age archaeological sites along the Amur River, in eastern Russia.

They found that — along the Lower Amur — these particular pieces of the world’s oldest pottery was used for fish, most likely salmon and freshwater fish.

These findings match the pattern of usage seen in pots of the same age from Japan — suggesting that fish was becoming a key food in this period of climatic chaos.

In contrast, the team found that fragments from the middle Amur bore lipids from ruminant animals — likely from the boiling of bone marrow.

This marrow would have provided an important source of sustenance in such scarce times brought about by the colder climate.

The researchers also found that these variations in pottery usage was also reflected in the different manufacturing techniques used to create them.

Together, the findings suggest that groups of hunter-gatherers in East Asia independently developed pottery making during this challenging time. 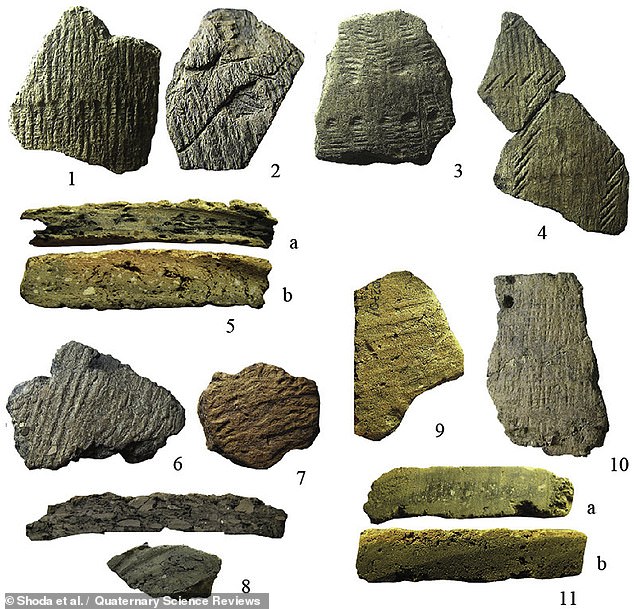 Dirty 16,000-year-old dishes have revealed that Siberian hunters cooked hot meals of fish and bone marrow to help them survive the harshest seasons of the ice age. Pictured, some of the pottery sherds the researchers analysed from site along the Amur River in eastern Russia

‘This study illustrates the exciting potential of new methods in archaeological science: we can extract and interpret the remains of meals that were cooked in pots over 16,000 years ago,’ said archaeologist Oliver Craig of the University of York.

‘It is interesting that pottery emerges during these very cold periods and not during the comparatively warmer [periods] when forest resources, such as game and nuts, were more available.’

‘We are very pleased with these latest results,’ said paper author Shinya Shoda of the National Research Institute for Cultural Properties in Japan.

‘They close a major gap in our understanding of why the world’s oldest pottery was invented in different parts of Northeast Asia in the Late Glacial Period, and also the contrasting ways in which it was being used by these ancient hunter-gatherers.’

‘There are some striking parallels with the way in which early pottery was used in Japan, but also some important differences that we had not expected.’

‘This leaves many new questions that we will follow up with future research.’ 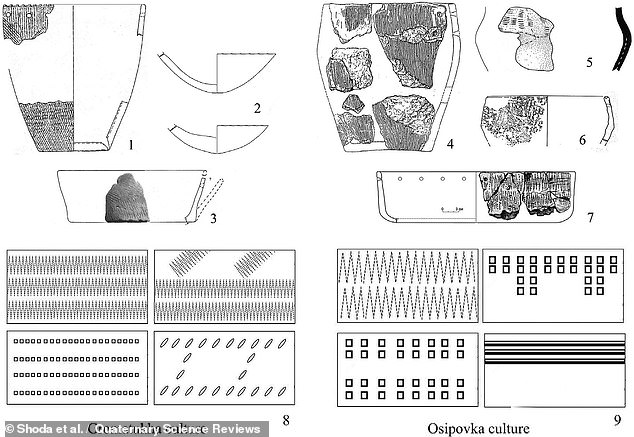 The researchers also found that these variations in pottery usage was also reflected in the different manufacturing techniques used to create them (as pictured). Together, the findings suggest that hunter-gatherers across East Asia independently developed pottery making 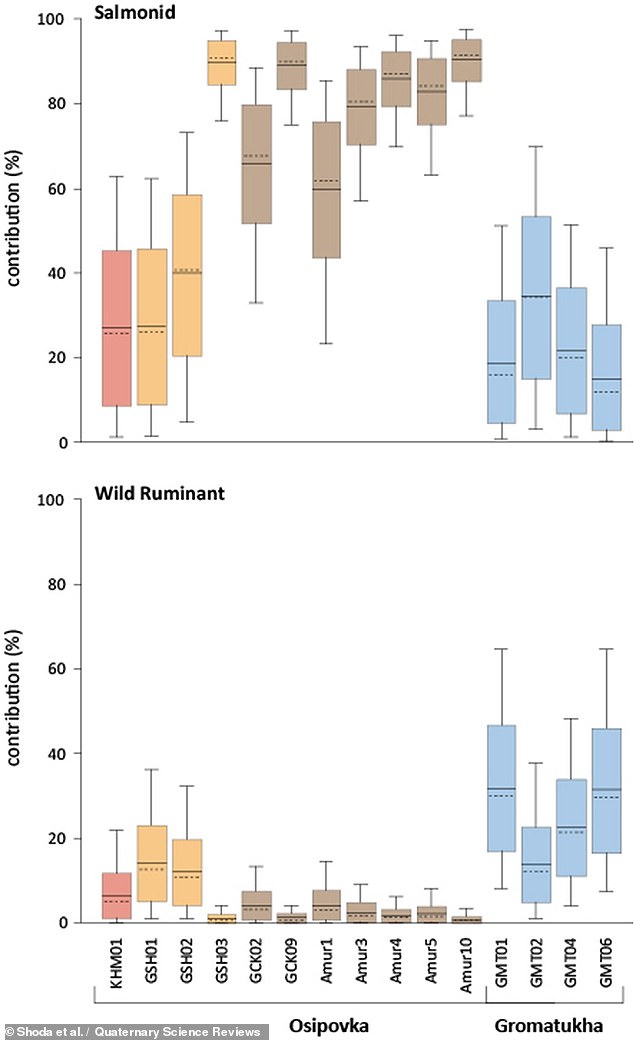 They found that — along the Lower Amur — the pottery was used for fish by the Osipovka culture (bottom). In contrast, the team found that fragments from the middle Amur (from the Gromatukha culture) bore lipids from ruminant animals — likely from boiling bone marrow

‘The insights are particularly interesting because they suggest that there was no single “origin point” for the world’s oldest pottery,’ said paper author and archaeologist Peter Jordan of the University of Groningen, in the Netherlands.

‘We are starting to understand that very different pottery traditions were emerging around the same time but in different places, and that the pots were being used to process very different sets of resources,’ he added.

‘This appears to be a process of “parallel innovation” during a period of major climatic uncertainty, with separate communities facing common threats and reaching similar technological solutions.’

The last Ice Age reached its most intense around 26,000–20,000 years ago — forcing the humans of the time to abandon more northern-most regions, including large swathes of Siberia.

Temperatures would only begin to rise around 19,000 years ago, at which point small groups of hunters were able to begin to reoccupy these empty landscapes.

The full findings of the study were published in the journal Quaternary Science Reviews.

HOW DO RESEARCHERS DETERMINE ANCIENT DIETS?

Researchers recently concluded that people living in southern Scandinavia during the Stone Age were more reliant on fish than was previously believed.

They reached this conclusion by studying the bones of 82 individuals who lived thousands of years ago.

The researchers employed Bayesian statistical modeling to learn about human diets following the melting of ice from the last ice age.

In addition to looking at human bones the scientists examined animal bone material in order to ‘gain an insight into how diets vary between different places’, the study said.

The report states that fish were essential for people living in territories both coastal and inland.

The analysis explains: ‘The results show that the water’s resources dominated protein intake in both marine and fresh water environments.

‘The results also show there are considerable local variations in the preferred species but that fishing has been highly significant for human subsistence, and the significance of fishing appears to constantly increase.’