With cases soaring, diphtheria is on track to return as a major global threat as it evolves resistance to a number of antibiotic classes, a study has warned.

Experts from the UK and India analysed data on 512 samples of Corynebacterium diphtheria — the bacteria behind the disease — taken from 1896–2018.

Alongside an increasing prevalence of genes that confer antibiotic resistance, the team found evidence that it could one day evolve beyond our current vaccine.

A highly contagious and potentially fatal infection, diphtheria affects the nose, throat and occasionally skin — and is spread by coughs, sneezes and direct contact.

It is typically caused by the toxin produced by C. diphtheriae bacterium, although systemic infections can result from non-toxic C. diphtheria.

While babies in the UK and other high-income countries are typically vaccinated against the disease, sporadic outbreaks still occur in other parts of the world.

The onset of the COVID-19 crisis, meanwhile, has set back childhood diphtheria vaccination schedules across the globe, compounding the issue, the team said. 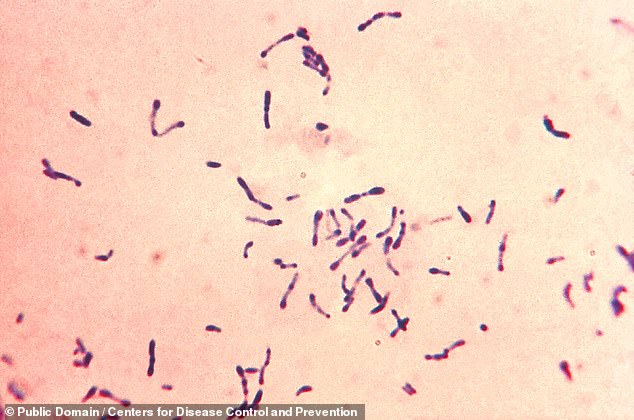 With cases soaring, diphtheria is on track to return as a major global threat as it evolves resistance to a number of antibiotic classes, a study has warned. Pictured: Corynebacterium diphtheriae, the bacteria responsible for diphtheria infections

In their study, the researchers sequenced the genomes of 61 bacteria isolated from patients and combined this with publicly available data on 411 other C. diphtheriae variants to map out how different outbreaks were related and had spread.

The team’s analysis revealed cluster of genetically-similar C. diphtheriae from across multiple continents — especially Asia and Europe — indicating that the bacteria has been established in and migrated with the human population for at least a century.

Diphtheriae toxin is the main disease-causing component of the bacteria, and encoded for by the so-called tox gene, of which the team found 18 different variants, several of which had the potential to alter the toxin’s structure.

‘The diphtheria vaccine is designed to neutralise the toxin, so any genetic variants that change the toxin’s structure could have an impact on how effective the vaccine is,’ said paper author Gordon Dougan of the University of Cambridge.

‘Our data doesn’t suggest the currently used vaccine will be ineffective.’

However, he added that ‘the fact that we are seeing an ever-increasing diversity of tox variants suggests that the vaccine, and treatments that target the toxin, need to be appraised on a regular basis.’ 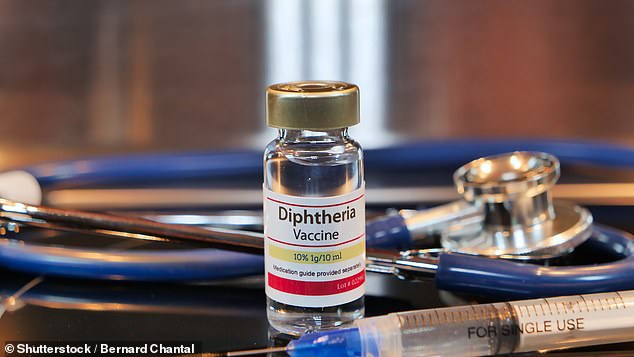 While babies in the UK and other high-income countries are typically vaccinated against the disease, sporadic outbreaks still occur in other parts of the world. And reported case numbers are increasing, from a yearly average of 8,105 cases from 1996–2017 to 16,651 in 2019

Looking at antimicrobial resistance, meanwhile,  the team found that the number of resistance genes pre genome has been increasing — with bacteria from the most recent decade having four times as many as those from the 1990s.

‘The C. diphtheriae genome is complex and incredibly diverse. It’s acquiring resistance to antibiotics that are not even clinically used in the treatment of diphtheria,’ explained paper author Robert Will of the University of Cambridge.

‘There must be other factors at play, such as asymptomatic infection and exposure to a plethora of antibiotics meant for treating other diseases,’ he added.

‘It’s more important than ever that we understand how diphtheria is evolving and spreading,’ added paper author and infectious disease researcher Ankur Mutreja.

‘Genome sequencing gives us a powerful tool for observing this in real time, allowing public health agencies to take action before it’s too late,’ the Cambridge expert said.

‘We mustn’t take our eye off the ball with diphtheria, otherwise we risk it becoming a major global threat again, potentially in a modified, better adapted, form.’

The full findings of the study were published in the journal Nature Communications.

Diphtheria is a highly contagious and potentially fatal infection that can affect the nose and throat, and sometimes the skin. It’s rare in the UK, but there’s a small risk of catching it while travelling in some parts of the world.

Diphtheria is rare in the UK because babies and children are routinely vaccinated against it.

The best way to avoid diphtheria while travelling is to be fully vaccinated against it.

If you’re travelling to a part of the world where diphtheria is widespread, you may need a booster vaccination if you were last vaccinated against it more than 10 years ago.

Diphtheria is found in many areas, including:

Places considered to be high risk can change over time.

How diphtheria is spread

Diphtheria is highly contagious. It’s spread by coughs and sneezes, or through close contact with someone who’s infected.

You can also get it by sharing items, such as cups, cutlery, clothing or bedding, with an infected person.

The main symptoms of diphtheria are:

If it affects your skin (cutaneous diphtheria), it can cause:

Get urgent medical help if you have symptoms of diphtheria and:

Diphtheria needs to be treated quickly in hospital to help prevent serious complications, such as breathing difficulties or heart problems.

The main treatments are:

Treatment usually lasts 2 to 3 weeks. Any skin ulcers usually heal within 2 to 3 months, but may leave a scar.

People who have been in close contact with someone who has diphtheria may also need to take antibiotics, or may be given a dose of the diphtheria vaccination.