Did Charles Darwin suffer from Lyme disease? Evolutionary biologist’s lifetime of illnesses was caused by a tick bite in Britain, say Dutch scientists

Charles Darwin is one of the greatest scientific minds of all time and a controversial new study claims the father of evolutionary biology suffered from Lyme disease.

Darwin was ill for the majority of his adult life following his iconic voyage on-board the HMS Beagle where he developed his theories of natural selection and evolution.

After returning to his home at Down House in Kent the naturalist married his cousin and fell ill, reporting symptoms of diarrhoea, rashes, vomiting and muscle pain.

Detailed in his many notebooks and diaries, Darwin recorded his despair over his varied symptoms, which also included frequent heart palpitations and flatulence.

Many historians believe it was a tropical illness he contracted on the Beagle which led to his lifelong poor health.

Others have argued his symptoms were largely psychosomatic and anxiety induced. 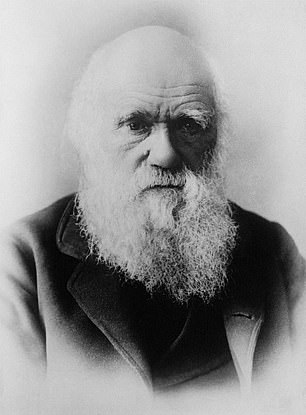 Charles Darwin (pictured) may have contracted Lyme disease after a tick bite which he contracted in Britain, researchers claim

New research suggests that Darwin may have been infected by a tick as he collected specimens from the British countryside, shortly before his voyage.

Erwin Kompanje and Jelle Reumer at the Natural History Museum in Rotterdam searched online databases of Darwin’s notes and correspondence for any mention of symptoms that might give clues to his mystery illness.

The Dutch researchers believe his mild fluctuating symptoms, which started to appear before he reached South America in 1835, are consistent with Lyme disease.

The study notes that Lyme disease was present in the British Isles in the late eighteenth and early nineteenth centuries.

In his numerous writings, Darwin details his ‘many bad attacks of sickness’ including ‘faintness’, ‘uncomfortable palpitations’, even suggesting that he was ‘rapidly dying’.

‘He had a lot of different symptoms: swimming of the head, a shortness of breath, trembling hands, and all of them came and went, and that is quite typical of Lyme disease,’ said Erwin Kompanje, a clinical researcher at the Erasmus University medical centre in Rotterdam.

‘Exposure to a tick carrying Borrelia in Great Britain is much more plausible than exposure to Chagas disease during his travel in South America,’ the researchers write.

‘Darwin travelled around England and Wales, collecting insects, shooting birds, picking up stones and thus being exposed to ticks,’ the authors add.

‘There must thus have been ample time during the first three decades of his life to get infected.’

However, other scientists are not be convinced by the Lyme disease diagnosis.

Misdiagnosis is quite common in the condition because the symptoms mimic other diseases.

One common sign of being bitten by an infected tick is a red bullseye-type rash, but such a mark is never described in Darwin’s writing. 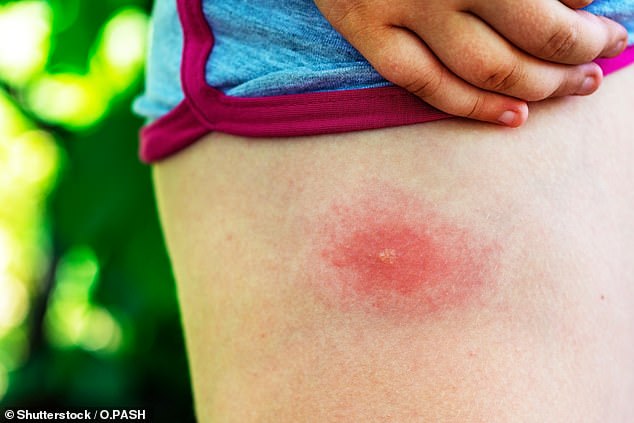 Other scientists are not be convinced by the Lyme disease diagnosis. Misdiagnosis is quite common in the condition because the symptoms often mimic other diseases. One common sign of being bitten by an infected tick is a red bullseye-type rash (pictured), but such a mark is never described in Darwin’s writing (stock)

WHAT IS LYME DISEASE?

Lyme disease is caused by a bacteria that is transmitted to humans through the bite of infected black-legged ticks.

The most common symptoms of the disease are fever, headache, fatigue and a skin rash called erythema migrans.

The disease can typically be treated by several weeks of oral antibiotics.

But if left untreated, the infection can spread to the joints, heart and nervous symptoms and be deadly.

WHAT HAPPENS WHEN YOU ARE INFECTED?

During the first three to 30 days of infection, these symptoms may occur:

The rash occurs in approximately 80 per cent of infected people.

It can expand to up to 12 inches (30 cm), eventually clearing and giving off the appearance of a target or a ‘bull’s-eye’.

Later symptoms of Lyme disease include:

Richard Wall, a specialist in ticks at the University of Bristol, told the Guardian: ‘Borreliosis is a particularly difficult infection to diagnose symptomatically even when the patient is available because of the diffuse and highly variable nature of the clinical signs; some researchers even question the existence of a chronic form of the disease.

‘So, retrospective diagnosis at a historical distance of 200 years, while interesting, must be considered as highly speculative.’

The ill health of the Darwin family was not restricted to Charles as two of his ten children with his wife and cousin Emma Wedgwood died.

It remains unknown if the demise of his children was linked to the close familial relationship between mother and father, a hereditary disease or poor fortune in an age of rudimentary and developing medicine.

The findings were reported in Deinsea, the journal of the Natural History Museum Rotterdam.

WHO IS CHARLES DARWIN?