Much of the world was forced into lockdown in 2020 to help stop the spread of COVID-19 and although its main objective was to combat the virus, such efforts led to a ‘rapid’ reduction in air pollution emissions.

Some cities in China saw a 50 percent decline ‘within a few weeks’ of their February 2020 lockdown, while some US states saw a 25 percent later in the spring.

‘Global ozone levels had dropped to a level that policymakers thought would take at least 15 years to reach by conventional means, such as regulations,’ NASA shared in a statement. 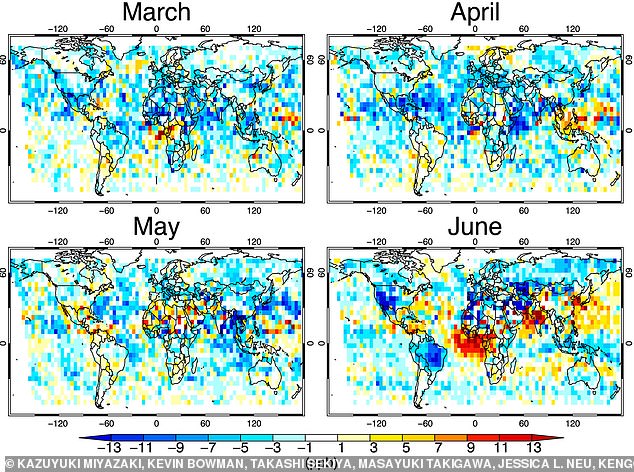 JPL scientist Kazuyuki Miyazaki, who led the research, said in a statement: ‘I was very happy that our analysis system was able to capture the detailed changes in emissions across the world.

‘The challenging and unprecedented nature of this work is a testament to improvements in satellite monitoring in service of societal needs.’

The team used satellite data from five NASA and European Space Agency (ESA) orbiting devices, models of atmospheric chemical reactions and weather and past climate models to determine if lockdown efforts had any impact on the ozone by comparing data to 2019.

Combining these tools, scientists reported global emissions dropped by 12 percent in February, 14 percent in March and 15 percent in April, with June recording a 13 percent reduction. 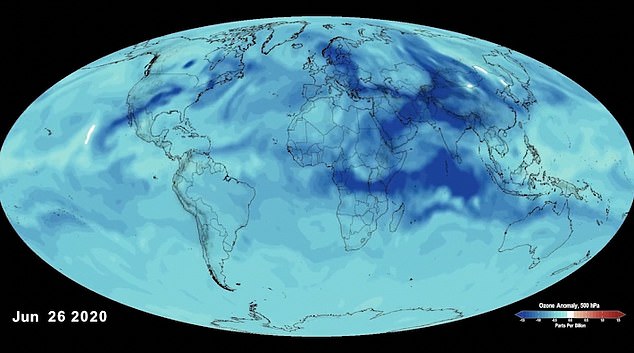 Scientists reported global emissions dropped by 12 percent in February, 14 percent in March and 15 percent in April, with June recording a 13 percent reduction 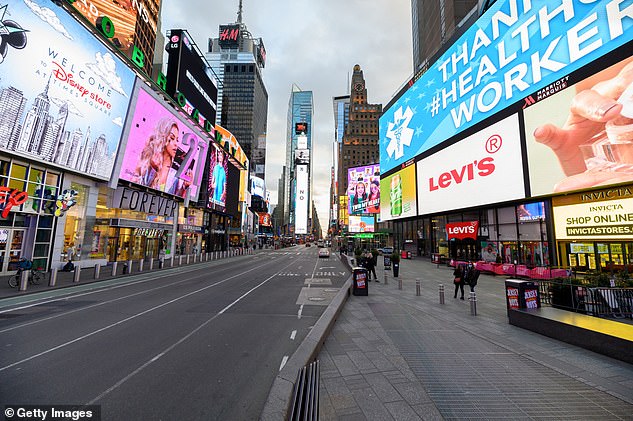 This was largely due to emission reductions in Asia and the Americas, which are among the largest producers of the harmful gases in the world. Pictured is Time Square in New York City when much of the US was under lockdown

‘In February, the reduction in emissions from China made the largest contribution (36%) to the global NOx anomaly, whereas the contributions from other regions are larger from March to June, when China relaxed its restrictions,’ scientists wrote in the study published in Science Advances.

‘Regional total anthropogenic emissions dropped by 18 to 25% in April and May across Europe, North America, and the Middle East and West Asia. Africa and South America also show clear but moderate reductions in emissions (∼5 to 10%) in April and May, with substantial spatial variations within the regions,’ they added.

Chinese NOx emissions rapidly declined from late January through late February, which is associated with the nation’s first lockdown.

This was followed by a rapid recovery to normal levels in March and April, but in May, levels started to decrease due to a second lockdown that reduced levels by another eight percent. 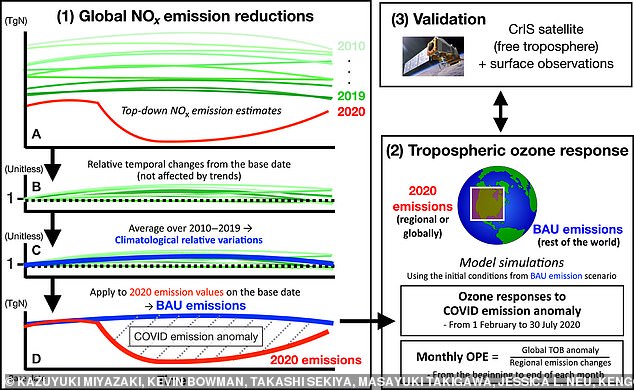 The team used satellite data from five NASA and European Space Agency (ESA) orbiting devices, models of atmospheric chemical reactions and weather and past climate models to determine if lockdown efforts had any impact on the ozone by complaining data to 2019

‘We estimate the maximum Chinese emission reduction to be 36% in total from early January to mid-February and about 20% due to the COVID restriction when excluding the influence of the Chinese New Year holiday,’ reads the study.

In Italy, the early implementation of lockdown led to large emission reductions, from late February to early May, of up to 25 percent.

Other European countries, such as France and Spain, also experienced large emission reductions starting in March through May.

Most of the US announced stay-at-home orders in late March, but NASA saw a small emission decline in late February and early March.

Levels quickly dropped to about 25 percent in April and May, ‘followed by a moderate recovery in June,’ according to the study.

WHAT ARE THE EFFECTS OF THE WORLD’S MAJOR AIR POLLUTANTS?

According to the Environmental protection Agency, there are six major pollutants which can impact on human health and well-being.

These particles come in many sizes and shapes and can be made up of hundreds of different chemicals.

Some are emitted directly from a source, such as construction sites, unpaved roads, fields, smokestacks or fires.

Fine particles (2.5 parts per million)are the main cause of reduced visibility (haze) in parts of the United States, including many of our treasured national parks and wilderness areas.

Carbon monoxide: Breathing air with a high concentration of CO reduces the amount of oxygen that can be transported in the blood stream to critical organs like the heart and brain.

At very high levels, which are possible indoors or in other enclosed environments, CO can cause dizziness, confusion, unconsciousness and death.

It forms from emissions from cars, trucks and buses, power plants, and off-road equipment.

Breathing air with a high concentration of NO can irritate airways in the human respiratory system. Such exposures over short periods can aggravate respiratory diseases, particularly asthma, leading to respiratory symptoms (such as coughing, wheezing or difficulty breathing).

Sulfur dioxide: The largest source of Sulfur dioxide in the atmosphere is the burning of fossil fuels by power plants and other industrial facilities.

Short-term exposures to SO can harm the human respiratory system and make breathing difficult. Children, the elderly, and those who suffer from asthma are particularly sensitive to effects of SO.

Ground-level Ozone: The ozone layer in the lower area of the lower portion of the stratosphere, approximately 12 to 19 miles above the surface of the planet (20 to 30 km).

Although ozone protects us against UV radiation, when it is found at ground level it can cause health problems for vulnerable people who suffer from lung diseases such as asthma.

It is created by chemical reactions between oxides of nitrogen (NOx) and volatile organic compounds (VOC) – that are found in exhaust fumes – in the presence of sunlight.

Lead: Major sources of lead in the air are ore and metals processing and piston-engine aircraft operating on leaded aviation fuel.

Other sources are waste incinerators, utilities, and lead-acid battery manufacturers. The highest air concentrations of lead are usually found near lead smelters.

Depending on the level of exposure, lead can adversely affect the nervous system, kidney function, immune system, reproductive and developmental systems and the cardiovascular system.

Infants and young children are especially sensitive to even low levels of lead, which may contribute to behavioural problems, learning deficits and lowered IQ.