A couple who met on Tinder and relied on their phones to foster the first sparks of their romance have got engaged using a ring made from their old phones.

In a homage to the technology that brought them together James Lawrence, 24, and Hayley Orchard, 26, from Melksham, Wiltshire, recycled the semi-precious components of their old iPhone 5s into something with lasting sentiment.

The ring is made from the handset speakers and microphones that the couple used to whispering sweet nothings to each other, the cameras they used for selfies and video chat when living apart, and a 9kt gold band created using the very circuit boards that kept those phones alive. 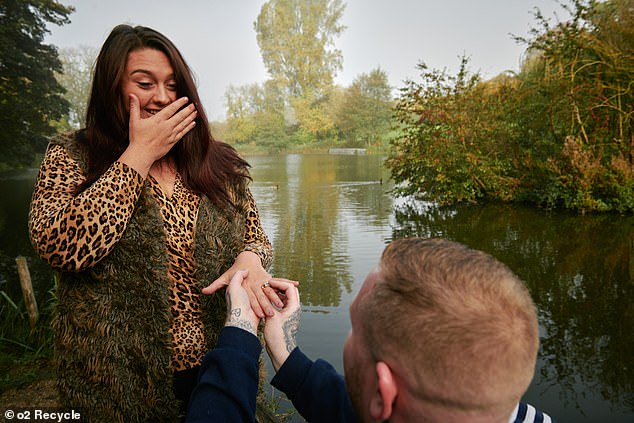 James Lawrence, 24, and Hayley Orchard, 26, get engaged using a ring made from their recycled iPhone 5s’ 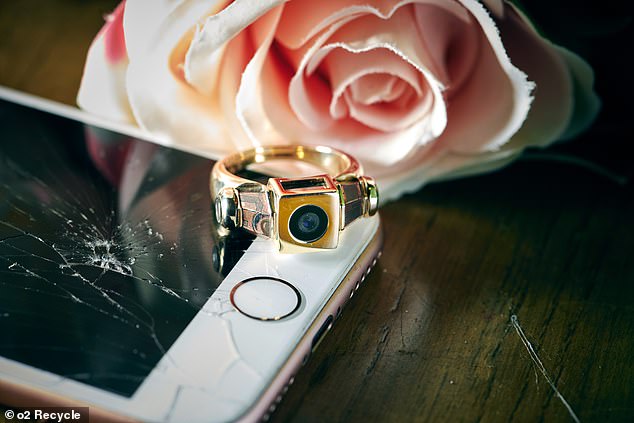 The engagement ring is made using the cameras, speakers, motherboard and sim card from James and Hayley’s iPhone 5s mobiles, while the band is cast in 9kt gold taken from the motherboard of smartphones

Newly engaged Mr Lawrence said: ‘I met my fiancée Hayley on Tinder and quickly realised she was the one for me.

‘The foundations of our relationship were built by spending hours sharing messages every day and having long telephone conversations before bed every night.

‘Those foundations turned into a house that we now share with our 10-month-old daughter and I wanted to celebrate the phones that brought me together with the love of my life.

‘Hayley thought the ring looked beautiful and jumped at the chance to show all of her friends, she couldn’t be happier with the sentiment.’

The proposal is thought to be the first of its kind and was made possible by O2 Recycle who created the ring along with bespoke sustainable jeweller Lylie’s to celebrate its 10th anniversary.

Nicola Green, Director of Corporate Affairs at O2, said: ‘Since 2009, O2 Recycle has saved 450 tonnes of waste from landfill – that’s the equivalent of thirty-five London buses’ worth of phones being recycled, and over £225 million going back to environmentally conscious customers.

‘We hope the story of James and Hayley will inspire even more people to see that recycling can mean a new life for your old mobile, once you’re finished with it.’

In a survey of 2,022 millennials in the UK, two out of five believed their relationship would crumble without their smartphones to keep them in touch with their significant other. 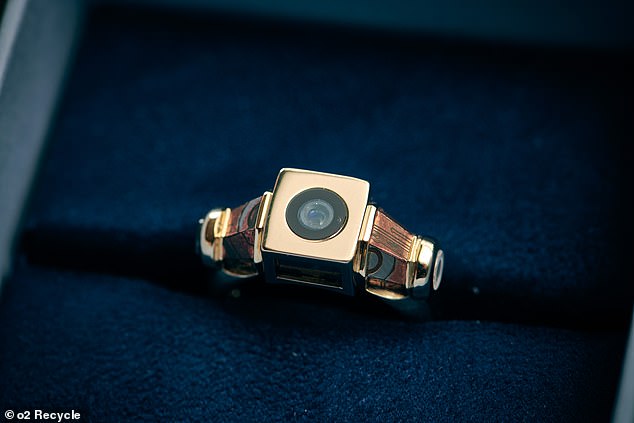 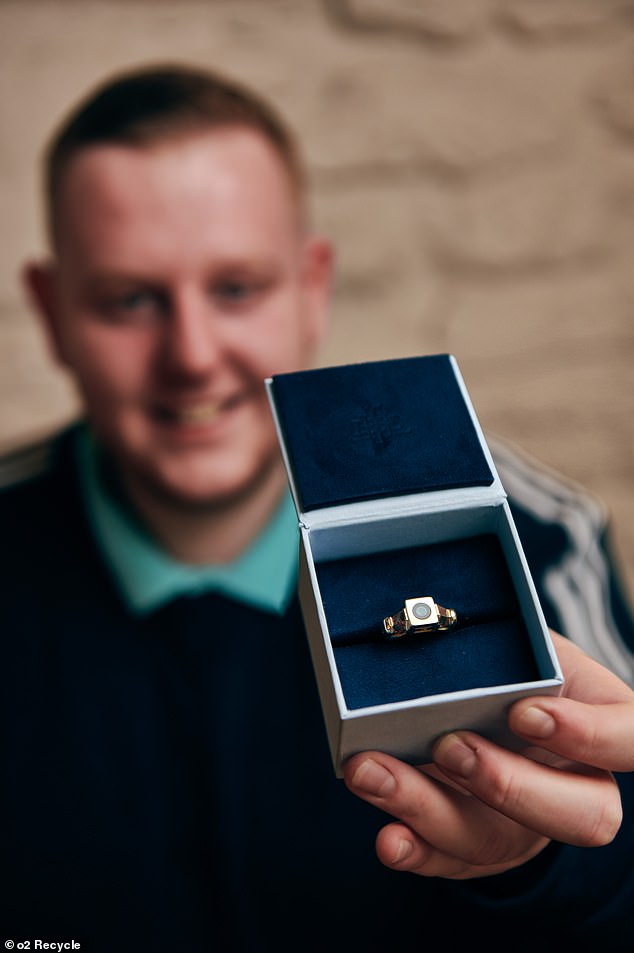 James with the unique ring before the proposal. The thoughtful ring will help remind the couple of the start of their relationship 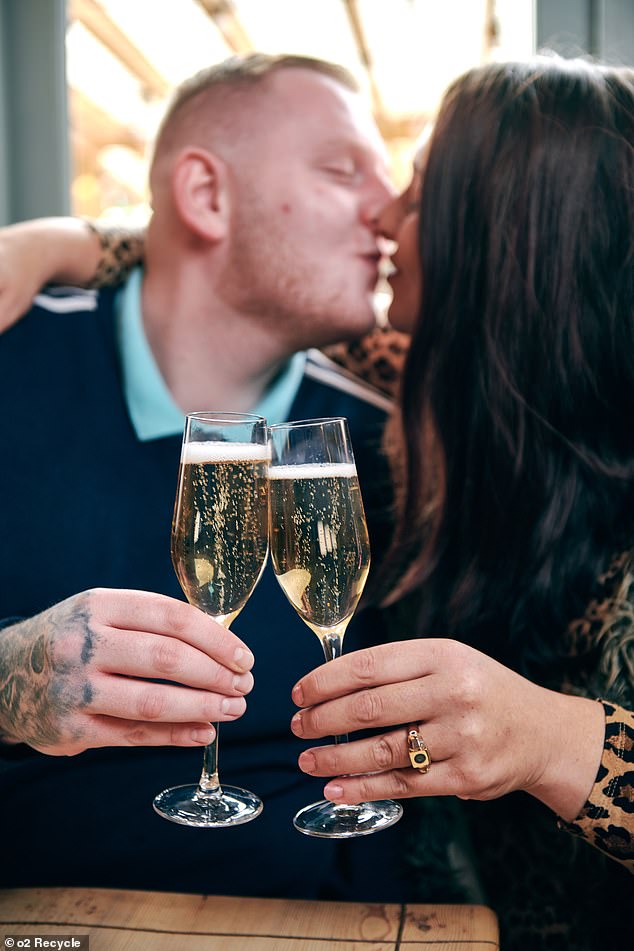 The pair celebrate the engagement with a glass of fizz. Half of environmentally conscious generation Y claiming they would like their engagement rings to be recycled

The study found that over a quarter of millennials spoke to their beloved on the phone more than they did in person, with the average millennial texting and calling their partner for three hours of the day.

With half of environmentally conscious generation Y claiming they would like their engagement rings to be recycled this may offer a solution when re-purposing the hard to recycle components from our technology filled lives. 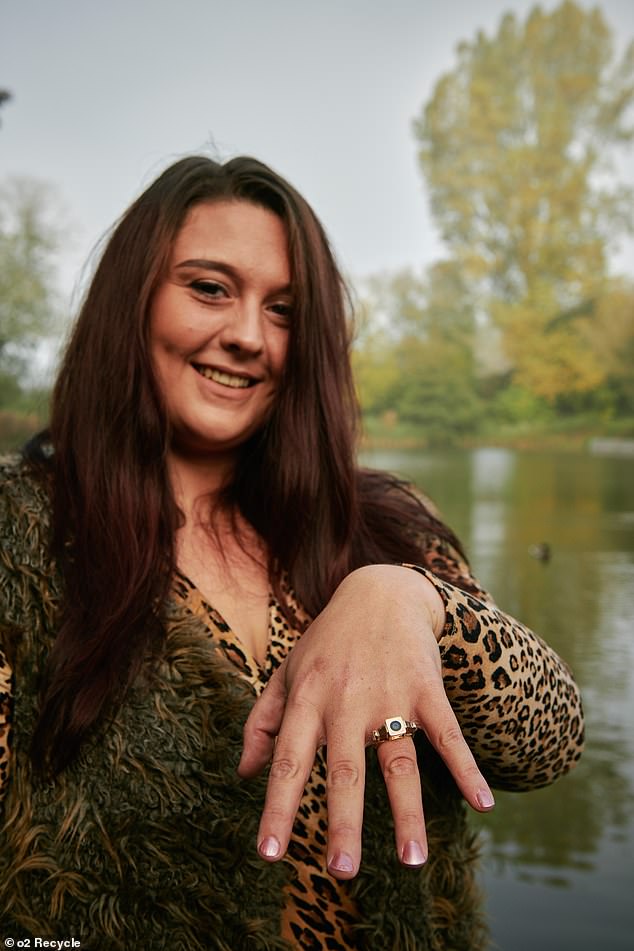 Mobile dating apps are officially the most reliable way to find a partner, as a quarter of millennials give up hope of finding someone in a traditional way