Could YOU pass the M.R. James test? The renowned writer’s spine-tingling ghost stories will summon the spirits of Christmas past… if you let him! A nervous HORATIO CLARE attempts a spooky supernatural challenge

Christmastide is the time of spirits, when the veils between reality and the Otherworld are thin, or so the ancients believed. The perfect moment, then, to take a ghostly challenge.

Before the miracle of the child born to take away the sins of the world and the coming of Christianity to Britain, celebrations blazed here in Norse yule-log fires, symbolising the return journey of the sun. In the freezing woods of the Celtic solstice, the Oak King of light vanquished the Holly King of darkness.

Beyond that antique firelight (and beyond our lighted windows and decorations today), strange presences move in the shadows. They are the old souls of the magic of Christmas, and we have always answered them with stories — the spookier the better.

The spirits descend to us through the ghostly visitors of Charles Dickens’ A Christmas Carol: they manifest in that gleeful prickle, half-terror, half-delight, that signals the presence of mystery beyond the world that we know. 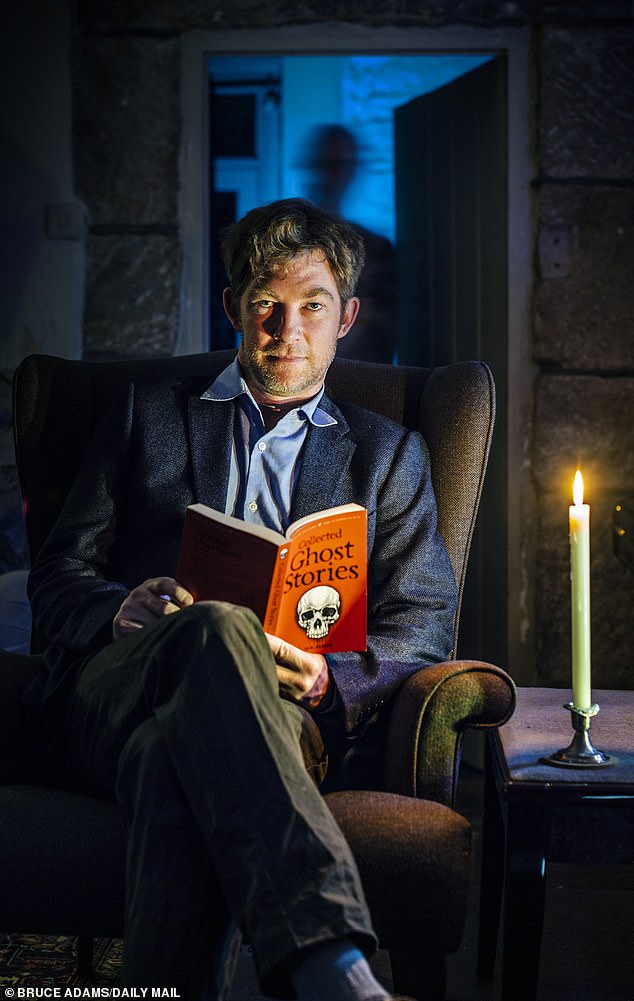 And now I am wondering if ghosts and spirits are gathering in the icy dark outside as I prepare to take a test that guarantees to give you goosebumps.

I am about to place myself in the power of a master haunter, the English author and medieval scholar M. R. James (1862-1936) — a writer who can put shivers into a sunny day.

Since I was a child I have avoided scary films, chilling tales and ghost stories. In the face of actual danger, I tend to be calm, but the supernatural makes me as jumpy as a cat.

The rules of the ‘M. R. James Test’ are simple. You must read one of his ghost stories by the light of a single candle in a deserted house in an empty room, with your back to an open door.

You fail the challenge if you get so unnerved that you have to turn around and look over your shoulder.

And so I begin. The spirits of our old house in West Yorkshire seem to gather around my flickering candle. Outside, among black rocks and crags, the night is alive with the rush and mutter of the nearby beck. Water and rock are the only great powers here, I have always thought — or are they?

We live in a wooded valley, owl-haunted, criss-crossed by ancient paths and overlooked by the brows of the Pennines.

My family have always found this an easy and kind old house, but tonight I am alone. 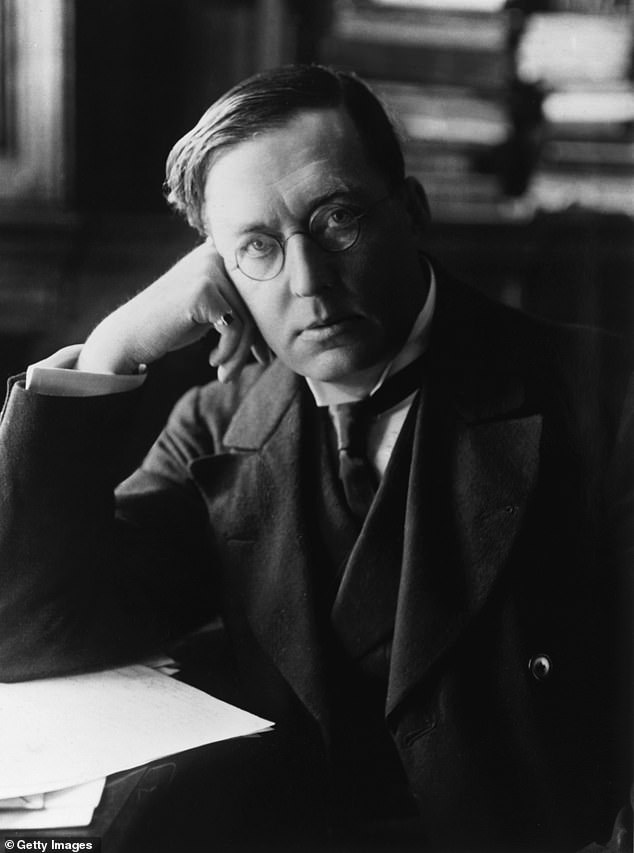 The boiler makes a comforting murmur — I switch it off. The house is suddenly still.

The story I have chosen is Oh, Whistle, And I’ll Come To You, My Lad, in which a young academic takes a room in a haunted East Coast hotel.

James would have liked this old house. On the night we moved in, I could feel and hear the spirits of the place.

There is a strange pit covered by an old grate in front of the fire in the drawing room. That first night, I found myself pouring a splash of wine in there: an involuntary pagan rite.

All that night, the house creaked, its spirits clearly disturbed by our arrival, curious and palpable.

Ever since, we have felt safe here . . . but there has always been something about that hearth-hole under the grate.

I have locked the doors. It is time to begin. I think of ouija boards, poltergeists and the mysteries of the night. I feel a slight flush across my shoulders and in my cheeks. Now there is only the soft ticking of the kitchen clock.

When I was a child, I used to be scared by pictures on certain book covers — I would never have tolerated the one I pick up now. The cover is lurid orange and the illustration is of a skull. Collected Ghost Stories by M. R. James.

There is a noise and my heart beats! What is it? I freeze. There it is again! Just the radiator, contracting as it cools? I hope so.

The story describes Professor Parkins of the fictional St James’s College, who is ‘young, neat and precise in speech’.

The holidays are coming and Parkins, who disapproves of those who take the supernatural seriously, plans to stay at the haunted Globe Inn in a town called Burnstow.

One of Parkins’s colleagues tells him there is a ruined tomb on the beach nearby. Parkins casually mentions that the only room available at the hotel has another bed in it. 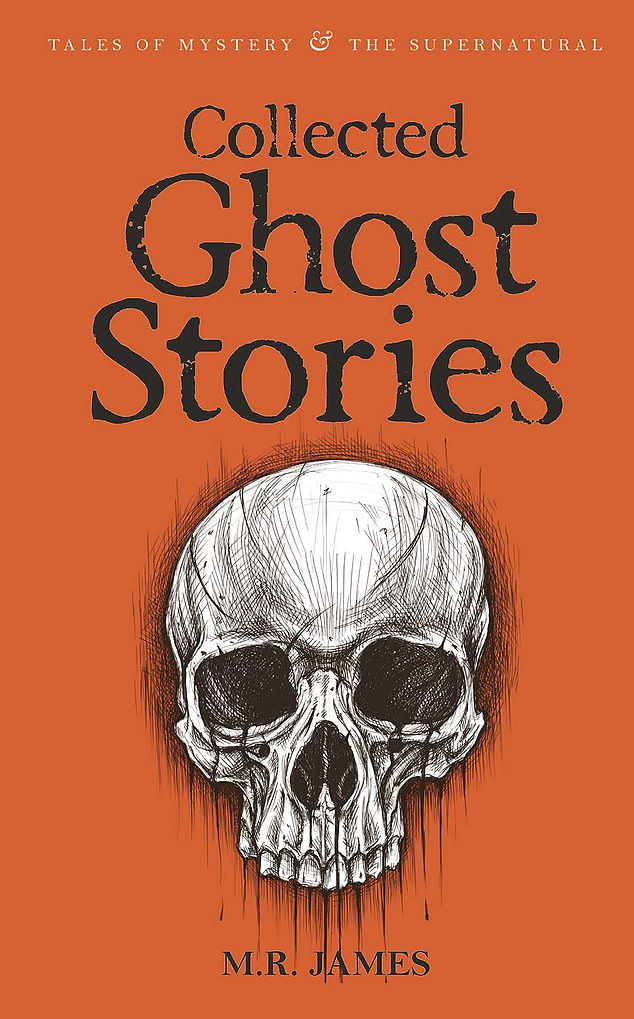 Is it a cat? There is a sound: tiny taps on the pane. It must be the rain or dead leaves, I tell myself.

I am already struggling not to look behind me. My legs feel suddenly cold as I read on.

During a walk on the beach, Parkins has found an old brass whistle, engraved in Latin, buried in the sand in ruins that he has learnt were left by the Knights Templar, the secretive Catholic military order which was founded in the 12th century.

On his way back to the hotel, with the whistle in his pocket, Parkins has the impression of a figure far away on the beach, running towards him but somehow drawing no closer.

Now Parkins is in his room, cleaning the whistle. He empties sand from it out of the window.

‘The night was clear and bright . . . and he stopped for an instant to look out at the sea and note a belated wanderer stationed on the shore in front of the inn.’

How brilliant James is — that wanderer ‘stationed’; the verb is perfect. We suspect that the running figure and the figure outside Parkins’s room may be one and the same.

A spectral watcher has arrived and stationed himself.

I am right with Parkins now. He blows the whistle!

‘Soft as it was, he felt it must be audible for miles around.’

Suddenly he imagines ‘a vision of a wide, dark expanse at night, with a fresh wind blowing, and in the midst a lonely figure’.

Parkins blows the whistle again. No, no, I want to tell him!

‘What force the wind can get up in a few minutes! What a tremendous gust! There! I knew that window fastening was no use! Ah! I thought so — both candles out. It’s enough to tear the room to pieces.’

There is no wind outside as I read. But there are tingles on the back of my skull.

Parkins tries to sleep. When he closes his eyes, he sees a man running in terror along the beach, pursued by a pale and fiendish shape that seems to bend and quest, as if sniffing him out, before darting forward at horrible speed. 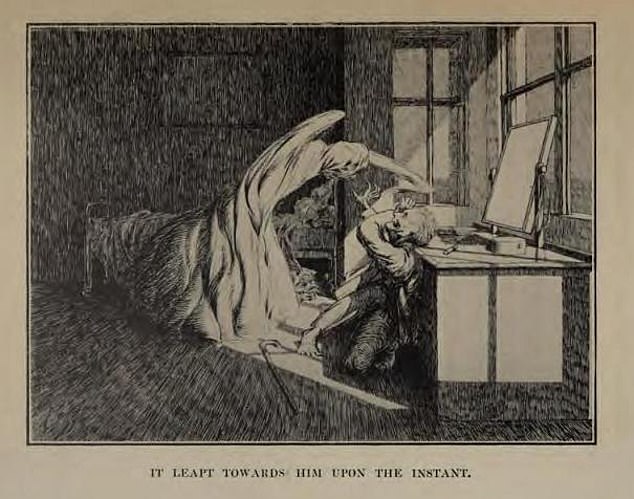 Illustration of Oh, Whistle, And I’ll Come To You, My Lad

I could do with a whisky, frankly, and some warm electric light, and the heating back on — but James has me gripped.

The next day, another guest at the hotel, a retired colonel, advises Parkins to throw the whistle into the sea.

A maid remarks that he seems to have slept in both the beds in his room, though Parkins is sure he did not disturb the other.

Coming back to the Globe after a day of golf, Parkins and the Colonel encounter a terrified small boy who describes a bizarre figure waving at him through a window of the hotel —the window of Parkins’s room.

It is at this point I crack, and look behind me. The light is off in our kitchen — but fear grips me.

Oh, Whistle, And I’ll Come To You, My Lad is just too good and too scary — it would be wrong to tell you what happens next.

When I have finished, I sit back and my gaze travels to the grate covering the strange space below our hearth.

Our boy’s grandmother was staying one night while we were away. She decided to clear out the mysterious hole.

Inside, below a layer of ash, she found something just as eerie as Parkins’s whistle — a clay figure, roughly made, as if by a child, its limbs stumpy and primitive.

It seemed to be what was once called a fetish, perhaps a charm or a little household god. I hurriedly put it back in its resting place, laying it respectfully in its tomb of ash.

Tonight I have certainly failed the M. R. James test, but by taking it, by giving the spirits of Christmas a chance to make themselves felt, I feel that I have paid homage to an older, stranger world that gathers out there, every night, beyond the window pane — and to that world’s greatest ghost storyteller.