Meet Cosmo the Frankenbull: Scientists genetically engineer a bull calf so that 75 per cent of its offspring will be male

A prize bull has been born that is genetically engineered so that 75 per cent of his offspring will be male.

In the meat industry, males are preferable to female animals because they are heavier and are 15 per cent more efficient at turning food into bodyweight.

This preference is the opposite for dairy cows, where females are favoured due to their ability to produce milk.

However, this genetically-modified bull, called Cosmo, is from a breed of cows that are grown for their meat, not for milk.

Cosmo was born in April at the University of California Davis, weighing around 110 pounds, and is believed to be perfectly healthy. 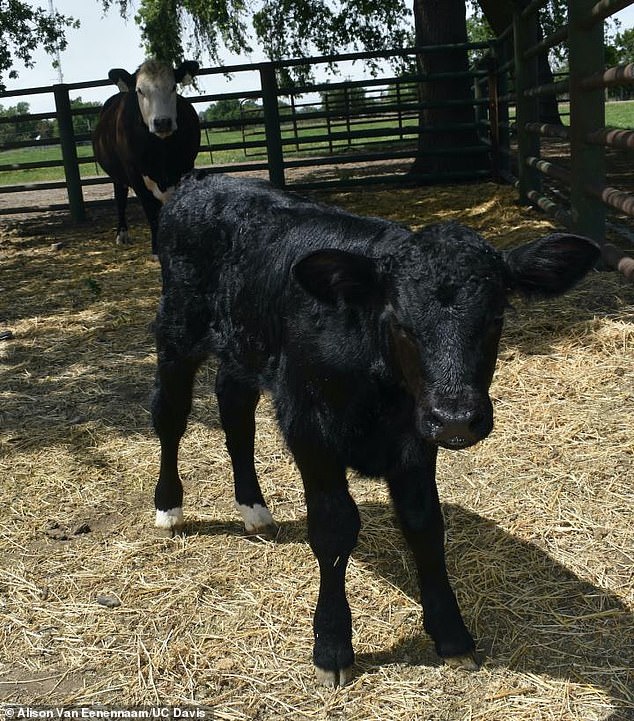 Cosmo (pictured) was born in April at University of California Davis and weighed around 110 pounds and is believed to be perfectly healthy. He has an additional SRY gene on chromosome 17 which is hoped to trigger male development in his future offspring which have the genetically female XY chromosomes

However, when Cosmo was just a clump of cells in the lab, experts inserted a gene called SRY into his chromosome 17.

SRY is known to initiate male development, regardless of which sex chromosomes an animal has.

As a result of this, scientists predict 75 per cent of Cosmo’s offspring will be male.

Half will be the normal males with XY chromosomes, but an additional quarter will be genetically female (XX) who inherit the SRY gene and grow up as males.

The other 25 per cent of descendents will be normal females without the SRY gene.

‘We anticipate Cosmo’s offspring that inherit this SRY gene will grow and look like males, regardless of whether they inherit a Y chromosome,’ said Alison Van Eenennaam, animal geneticist with the University of California Davis Department of Animal Science.

The path to creating Cosmo has been a long one filled with several failures, as genetically modifying animals is still an emerging field.

The researchers use a powerful tool called CRISPR which allows scientists to insert, replace or delete entire genes.

It not only alters the individual animal itself, but brings about permanent change that is also passed down the generations.

Previous attempts to improve the male-female ratio in cattle had failed because the academics were focusing on the X chromosome, which determines an animal’s sex.

‘It took two and a half years to develop the method to insert a gene into the developing embryo and another two years to successfully establish a pregnancy,’ said Joey Owen, a postdoctoral researcher who is co-lead of the project.

Cosmo is currently too young to sire his own offspring and will enter a breeding programme in 12 months.

His offspring will then be analysed to see if the presence of SRY on chromosome 17 is enough to trigger male development in animals that are XX.

Cosmo is a purely experimental creature and any animals produced from his lineage will not enter the human food supply, as genetically modified animals are not prohibited. 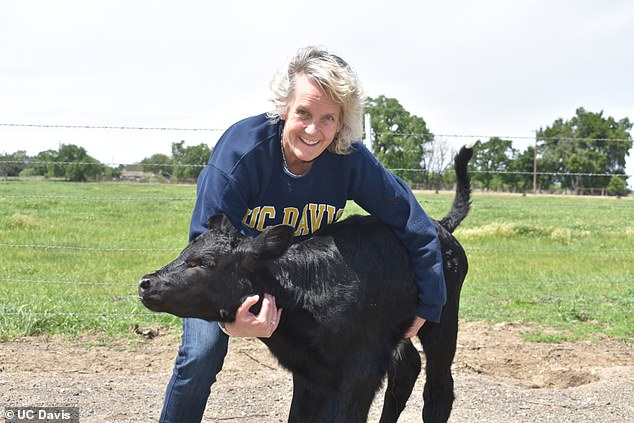 Cosmo (pictured) is the result of an experiment looking at increasing the male to female ratio of cattle. Male livestock are preferable to female animals because they are heavier are 15 per cent more efficient at turning food into weight, ideal qualities for an animal that will be slaughtered and sold for its meat

CRISPR is such a powerful tool it has sparked ethical debates over its use in animals and especially in humans.

In 2018, disgraced scientist He Jiankui announced that he had bankrolled an illegal project which used CRISPR to genetically alter two unborn twin babies in China.

His work led to international condemnation and he was ostracized by the scientific community.

The powerful tool CRISPR-Cas9 was used to snip away a section of their DNA and replaced with a HIV-resistant variant, He claims.

He, along with nine listed co-authors, proclaims his work as a ‘success’ and goes as far as to say it ‘will bring new hope to millions of families seeking healthy babies free from inherited or acquired life-threatening diseases.’

However, scientists brutalised the research and said it was littered with issues.

Academics who reviewed extracts from the controversial paper say He likely failed to give the babies a HIV-resistant gene and instead unwittingly inputted potentially dangerous mutations into the genomes of the twins, Lulu and Nana.

CRISPR-Cas9 is a tool for making precise edits in DNA, discovered in bacteria.