Coronavirus lockdown leads to a spike in poaching of critically endangered birds, tigers and rhinos as people in rural Asian communities hunt to supplement lost income

The coronavirus pandemic is fuelling an increase in poaching in Asia, a wildlife charity has warned.

COVID-19 and the associated lockdown is giving poachers ‘free reign’ to hunt protected species, according to the Wildlife Conservation Charity, a US-based non-profit with plots around the world.

In particular, three critically endangered giant ibis have been killed in a protected area in a single poisoning event in the last week.

The loss of just three of the great ibis, which is Cambodia’s national bird, has reduced the species’ global population by at least 1 per cent, the charity has said.

Desperate poachers have poisoned the bird’s waterholes and in an attempt to steal their meat, which would either have been eaten locally or sold on the black market.

Not only does this bring the creature closer to extinction, but such illegal acts damage local communities that rely on the bird for tourism and economic boosts. 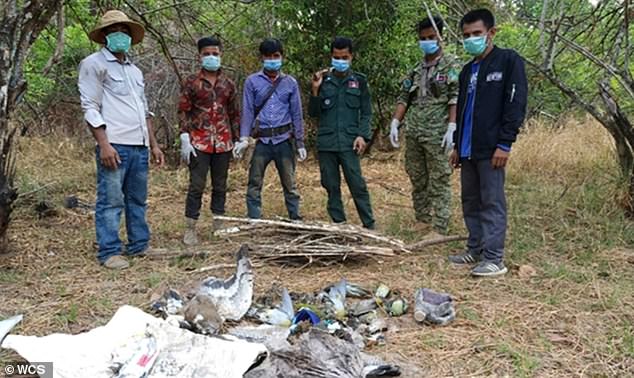 Dead birds and the remnants of poison recovered from the site in Cambodia. In the single poisoning event of April 9, between 1-2 per cent of the global giant ibis population was lost 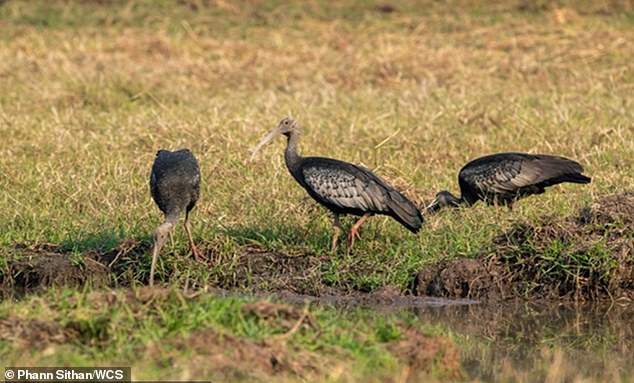 The giant ibis, which is classified as critically endangered globally, and is a protected species in Cambodia

‘The continued commitment of conservationists to local people in rural areas across the region is more important than ever right now, as they have no safety net and are alone on the front line, the first and last line of defence for the forests and wildlife in and around their communities.’

The recent poisoning incident was detected on April 9 in Chhep Wildlife Sanctuary, Preah Vihear Province in northern Cambodia, to which the giant ibis is native. 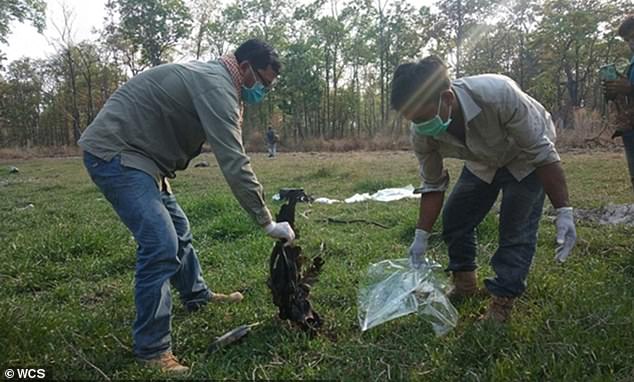 Community rangers in Cambodia seen here disposing of a dead giant ibis. The bird would likely have been killed for their meat, which would have been consumed locally or sold on the market

WHAT IS THE GIANT IBIS?

The giant ibis is described as the rarest bird in the whole of Southeast Asia.

It is classified as ‘Critically Endangered’, and is a protected species in Cambodia.

Although it was formerly widespread in Southeast Asia, it is now only found in Cambodia.

Giant Ibis inhabit remote deciduous forest in the lowlands of the Northern Plains and Eastern Plains.

Adults can reach between 40 to 41.5 inches in length, with an upright standing height of up to 39 inches.

It forages in pairs or small flocks in lowland marshes, wooded wet plains, and pools in forest clearings.

The IUCN Red List, the world’s most comprehensive inventory of the global conservation status of biological species, lists the giant ibis as ‘critically endangered’ with less than 200 mature creatures in existence.

Poachers put toxic carbofurans, which are normally used in pesticides to control insects, in waterholes known as trapeangs in Cambodia.

The offenders then were planning to collect the dead birds in their natural habitat after the poison has been ingested.

WCS says there are now fewer than 300 of the giant ibis (Thaumatibis gigantean) remaining in the wild.

But as well as the giant Ibis, victims have included the threatened white-winged duck, listed as endangered, and the vulnerable sarus crane, found in India and other parts of Asia. 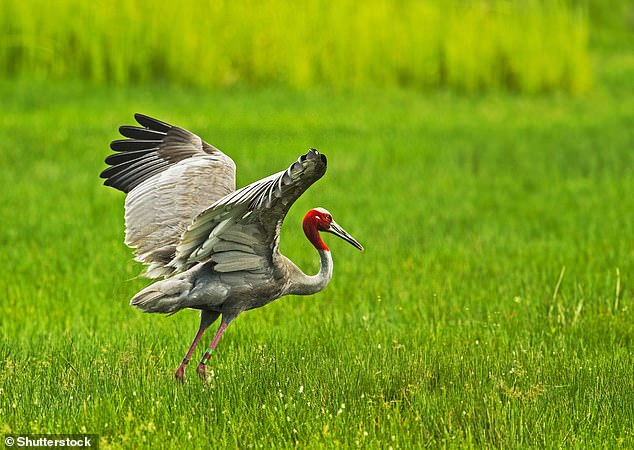 The WCS also says that the sarus crane bird (pictured), found in India and Southeast Asia, has also been poisoned

Thousands of tourists have collectively paid more than $100,000 in the last decade to visit the Northern Plains and catch a glimpse of the giant ibis.

But as rural economies have closed down and incomes have dried up, natural resources have been exploited, including illegal poaching of protected wildlife.

If the giant ibis is poached to extinction, tourism will be dented and this will have long-lasting effects on the country’s economy outside of the pandemic. 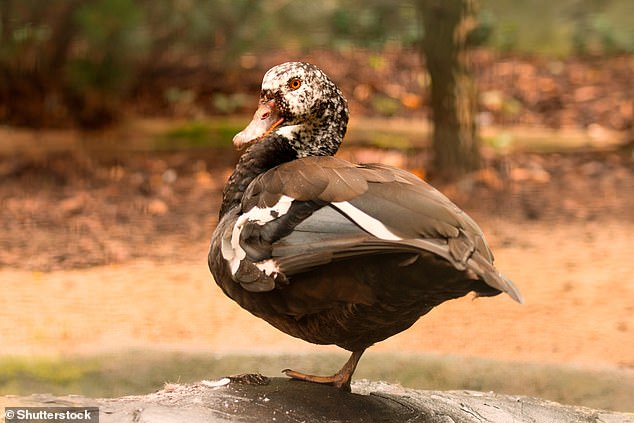 Victims have also included the white-winged duck, also found in Asia, which is listed as endangered

More than 500 Cambodian farmers also earn their income by growing rice specifically for the giant ibis to feed on, known as ‘Ibis Rice’.

These growers get nearly twice the market price for their special rice because it benefits the giant ibis – but these workers would also lose out on income if it went extinct.

In India, meanwhile, there are reports that tiger poaching is on the increase, while in Africa the rhinoceros and other endangered species could be at risk. 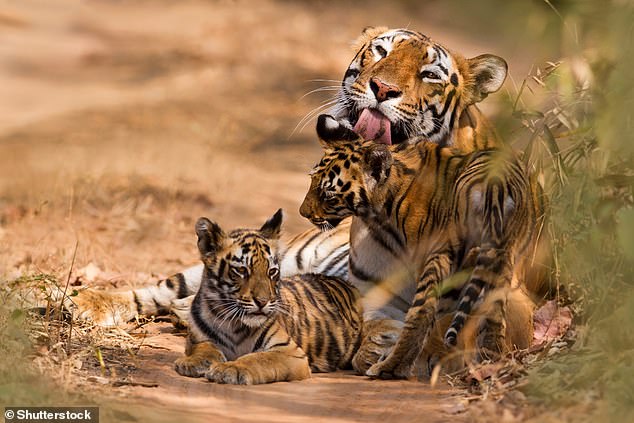 Residents around the world who are losing out on income because of a sudden downturn in tourism revenue may consider poaching protected species to make ends meet.

‘The concern is how do these areas maintain the effectiveness of their wildlife patrolling and security when about 50 per cent of their planned revenue for the year has now dropped to zero,’ Matt Brown, director of the Africa region for the Nature Conservancy, told the BBC.

‘There could be an increased direct poaching pressure on wildlife as a result of the downturn in the global economy.’