Coral reef islands like the Maldives could survive sea level rise caused by global warming because ‘they have a natural ability to adapt’, study claims

Predictions that sea level rise caused by global warming will see the world’s islands submerged under swelling currents may not come true, a new study suggests.

It claims that coral reef islands, such as the Maldives, could naturally adapt to survive surging water levels.

Previous research has claimed that sea level rise will cause islands to ‘drown’, with coral reefs being particularly susceptible, within decades.

However, an international team of scientists, led by the University of Plymouth, say this may not be a foregone conclusion. 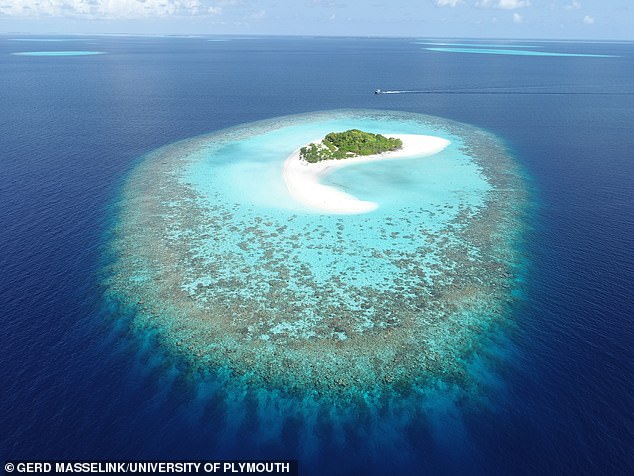 New research  claims that coral reef islands, such as the Maldives (pictured), could naturally adapt to survive surging water levels

Researchers say it is possible that coral reef islands could survive due to sediment from the beach being transferred to the island’s surface.

The study combines physical experiments with computer modelling to simulate how reef islands can respond when sea levels rise.

It found that sandy, or gravel, islands effectively ride the wave, with its crest being raised as sea level rises.

Professor Gerd Masselink, who led the research, said: ‘In the face of climate change and sea level rise, coral reef islands are among the most vulnerable coastal environments on the planet.

‘Previous research into the future habitability of these islands typically considers them inert structures unable to adjust to rising sea level.’

He says these previous studies therefore predict enormous risk of island loss due to coastal flooding.

As a result, much of the research looking at preventing this has gone into building coastal defences or removing inhabitants of island communities.

However, Professor Masselink says little attention has been paid to the natural robustness and adaptability of these islands.

‘These coral reef islands have developed over hundreds to thousands of years as a result of energetic wave conditions removing material from the reef structure and depositing the material towards the back of reef platforms, thereby creating islands.

‘The height of their surface is actually determined by the most energetic wave conditions, therefore overtopping, flooding and island inundation are necessary, albeit inconvenient and sometime hazardous, processes required for island maintenance.’

Academics developed a to-scale model of Fatato Island, part of the Funafuti Atoll in Tuvalu.

They put this model in a specialist simulator called the Coastal Ocean and Sediment Transport (COAST) Lab which mimics different oceanic conditions.

Researchers manipulated the simulation to imitate what may happen in the future as global warming continues and sea levels continue to creep upwards.

One scenario run by the scientists was a sea level rise of almost 2.5 ft (0.75 metres), which is expected by 2100, according to the Intergovernmental Panel on Climate Change.

This found that the island crest itself, the top of the land, rose by 2.3ft (0.7m), keeping pace with the sea level rise and staving off any ‘island drowning’.

Study co-author Professor Paul Kench from Simon Fraser University in Canada, said: ‘The model provides a step-change in our ability to simulate future island responses to sea level rise and better resolve what the on-ground transformations will look like for island communities.

‘Importantly, our results suggest that island drowning within the next few decades is not universally inevitable.

‘Understanding how islands will physically change due to sea level rise provides alternative options for island communities to deal with the consequences of climate change.

‘It is important to stress there is no one-size-fits-all strategy that will be viable for all island communities – but neither are all islands doomed.’