Comet NEOWISE, which was discovered in late March by a NASA space telescope, has quickly become the most talked-about astronomical event of the year. Seen exclusively from the Northern Hemisphere, NEOWISE is the brightest comet to visit our skies since Hale-Bopp in 1997. But all good things must come to an end the comet appears to have already peaked in brightness and made its closest approach of Earth on Thursday, July 23.

At its closest, the comet came within 64 million miles (103 million km) of Earth.

Comet NEOWISE is now racing towards the outer solar system and will not be visible from Earth for at least 6,800 years.

Emily Kramer, a co-investigator of the NEOWISE satellite, said: “It’s quite rare for a comet to be bright enough that we can see it with the naked eye or even just binoculars.”

As the comet races across the skies, astronomers have photographed its beautiful split tails. 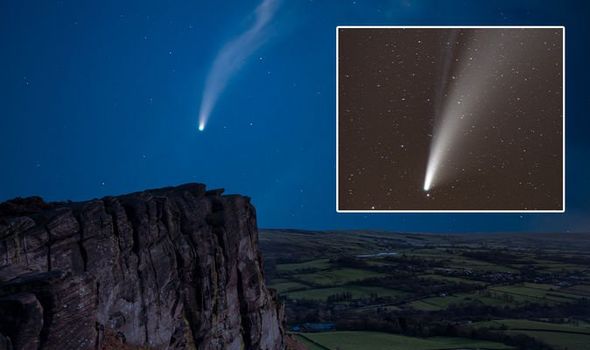 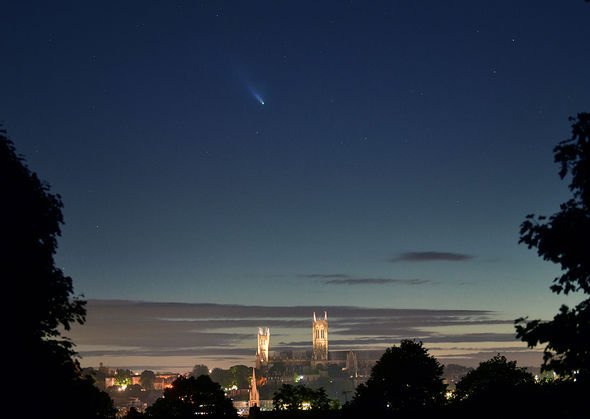 How long is COMET NEOWISE visible?

Comet NEOWISE appeared in the northern skies earlier this month after it survived a flyby of the Sun on July 3.

The comet then showed up fairly low on the horizon, under the bright star Capella.

At the time, Comet NEOWISE was a morning comet and was brightest in the wee morning hours before sunrise.

Since about mid-July, the comet steadily climbed higher and higher and is now best seen after sunset.

After tonight seeing #cometNEOWISE will prove a bit trickier

Comet NEOWISE is now moving directly under the Big Dipper or Plough asterism.

The Big Dipper’s seven stars are part of the constellation Ursa Major.

Astronomers expect NEOWISE will continue flying under the Big Dipper at least until the end of the month.

By July 31, the comet will be seen below and to the left of the asterism. 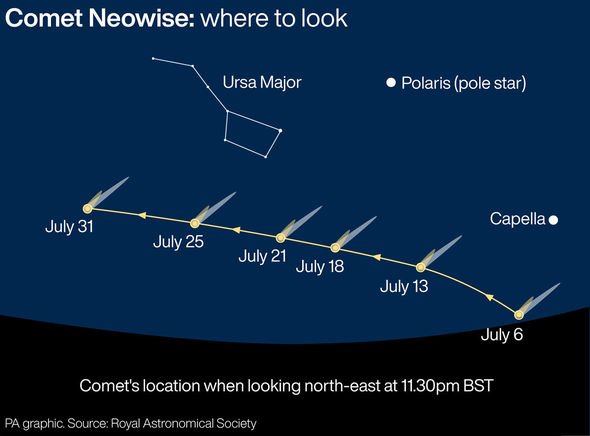 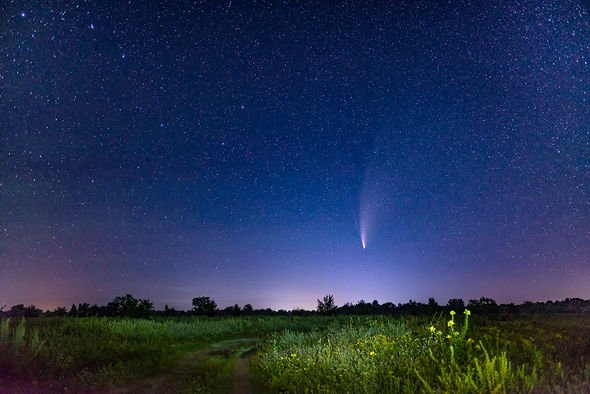 If the comet is no longer visible to the naked eye by the end of the month, you might still be able to see it through binoculars or a small telescope.

Even now, your best bet at seeing the comet is to use binoculars.

Otherwise, you might not see the comet’s split tail.

The Moon is also growing bigger and brighter and will peak on August 3, which could hinder your viewing experience.

“The bright Moon will be a bit overwhelming for the cometary one.”

And on Thursday, Mr Blanchflower tweeted: “Although #cometNEOWISE is going away from the Earth it is still visible each night.

“Appearance has taken a bit of a change. It’s coma/head/nucleus is seriously green.

“Look northwest under Ursa Major well after Sunset and for most of the night. Best in binoculars or Telescopes.”