Coldest temperature ever recorded in the Northern Hemisphere was -93.3°F and occurred in Greenland on 22 December 1991, experts confirm

Experts have verified a 29-year-old weather reading from Greenland which sets a new record for the coldest temperature ever recorded in the Northern Hemisphere.

An automated weather station positioned more than 10,000 ft above sea level and atop the Greenland ice sheet took the measurement on 22 December 1991.

The temperature sunk as low as -69.6°C (-93.3°F) at the site, located in a frigid place called Klinck, the World Meteorological Organization (WMO) says. 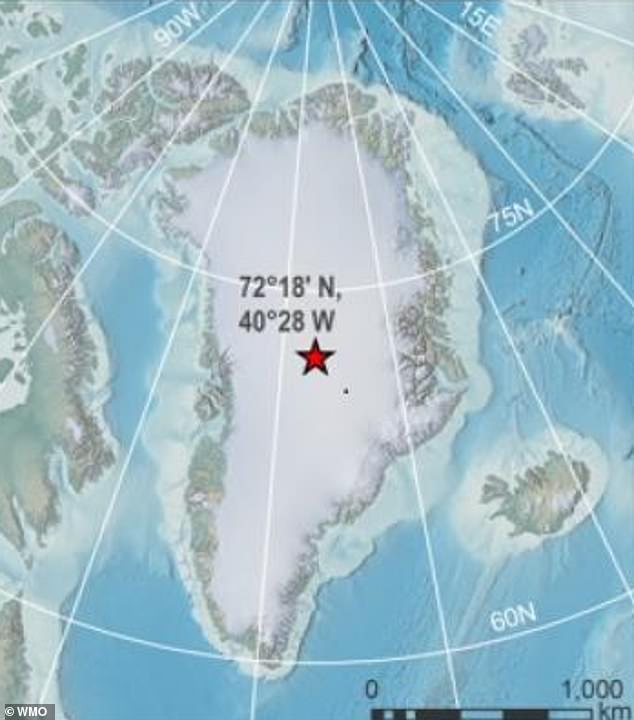 The temperature sunk as low as -69.6°C (-93.3°F) at an automated weather system, located in a frigid place called Klinck atop the Greenland ice sheet

This left picture shows the weather system and was taken in 1994. The annotated picture on the right shows the equipment on the device,which is built to survive in ultra-cold environments. a) air temperature probe  (b) 2m above snow level at time of record cold temperature (c) snow level in July 1992 (d) estimated snow level on 22 December 1991 (e) temp probe installed 0.9 m above snow surface at installation (buried in September 1991) 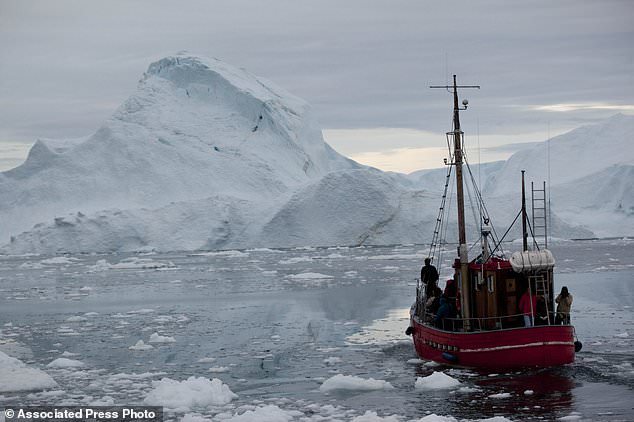 Pictured, a boat steers slowly through floating ice, and around icebergs, all shed from the Greenland ice sheet, outside Ilulissat, Greenland

The temperature tally surpasses the previous record of -67.8°C (-90°F), detected twice before at the Siberian sites of Oimekon in 1933 and Verkhoyanksk in 1892.

The latter Russian site made headlines in recent months for recording a new record-high temperature north of the Arctic Circle during a heatwave in the region.

The coldest temperature ever recorded on Earth was -89.2°C (-128.6°F) recorded in 1983 at the high-altitude Vostok weather station in Antarctica.

‘In the era of climate change, much attention focuses on new heat records,’ said WMO Secretary-General Professor Petteri Taalas in a statement.

‘This newly recognised cold record is an important reminder about the stark contrasts that exist on this planet.’

The automated weather site at Klinck was set up in the early 90s and operated for two years.

It was designed to form part of a network to record the meteorological conditions around the Greenland Crest during the Greenland Ice Sheet Project.

As a result, it was deliberately installed as close to the summit of the desolate ice sheet as possible.

In 1994 it was returned to the laboratory for testing and then sent for use in the Antarctic.

June, July and August of 2020 created the hottest summer ever recorded in the Northern hemisphere, according to official data.

When accounting for the Southern hemisphere as well, 2020 ranks as the world’s third-warmest summer since records began in 1880.

The figures come on the back of the second-hottest August on record for the top half of the globe.

Last month, the temperature was, on average, 2.14°F (1.19° C) higher than the average August temperature of the 20th century, before the Industrial Revolution.

However, some regions suffered more than others in the August heat.

South America and Oceania experienced their fourth-hottest August on record, according to NOAA data.

August 2020 also marks the 44th consecutive August where temperatures have been above the 20th-century average.

All components of the Automatic Weather Station were chosen because they are able to function in extremely cold conditions, according to George Weidner, who helped design the station.

‘On Greenland, all of the sites were installed by snowmobile. So the Automatic Weather Station had to be packed to survive a traverse over very rough snow surfaces,’ he said.

‘Years of packing experience in Antarctica helped us keep our Automatic Weather Station safe and snug on the sleds being pulled by the snowmobiles,’ he said.

But the readings from the station went under the radar, as the body which tracks heat records, the WMO Archive of Weather and Climate Extremes, only formed in 2007.

The new low was discovered by so-called ‘climate detectives’ working with the WMO’s Archive of Weather and Climate Extremes in Geneva.

They pored over reams of historic data in search of records like high and low temperatures, greatest rainfall, and even ‘heaviest hailstone’ and ‘longest lightning flash.’

After spotting the extremely cold temperature, the team tracked down the scientists who initially installed and operated the station, from the University of Wisconsin-Madison.

Independent experts assessed the data, which was said to have been immaculately recorded and kept, the weather of 1991 and the panel unanimously recommended acceptance of the observation as valid.

‘This investigation highlights the ability of today’s climate scientists to not only identify modern climate records but to play ‘climate detective’ and uncover important past climate records—thereby creating a high-quality long-term record of climate for climate-sensitive regions of the world,’ said Professor Randall Cerveny, Rapporteur of Climate and Weather Extremes for WMO.

The full findings are published in the Quarterly Journal of the Royal Meteorological Society.

Experts led from Germany found that the ice loss in 2019 was 15 per cent higher than the previous worst year on record — which was 2012.

However, they also noted that favourable conditions in 2017–2018 meant that melting was lower than in any other two-year period between 2003–2019.

Researchers can assess how fast ice mass is lost by tracking changes in gravity as recorded by the Gravity Recovery and Climate Experiment (Grace) missions.

Melt from the Greenland Ice Sheet is one of the largest contributors to sea level rise and presently contributes an increase of around 0.03 inches (0.76 mm) annually.

The findings come a week after a study revealed that Greenland’s glaciers have already passed what researchers have called the ‘point of no return’.

This, experts warned, means that the ice would now continue to melt away even if global warming could be completely stopped.