The top portion of the Chinese rocket resembles Blue Origin’s New Shepard while the body looks like SpaceX’s Starship, complete with side fins that guide the craft’s descent.

CAS Space is aiming to start sending paying customers into suborbital space in 2024.

According to the company’s press release, the rocket will seat up to seven passengers who will spend 10 minutes floating in zero gravity just above the Kármán line – the boundary between Earth’s atmosphere and outer space, about 62 miles above Earth’s surface. 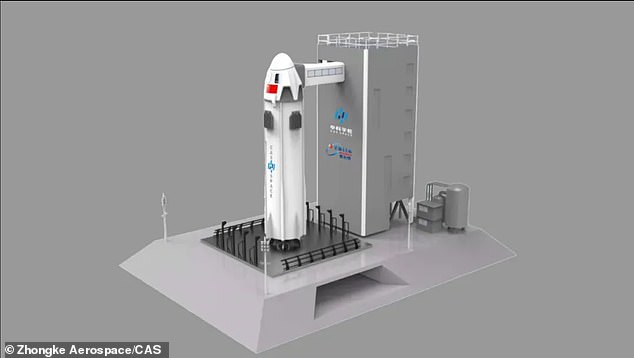 CAS Space, a commercial offshoot from the Chinese Academy of Sciences (CAS), revealed mock-ups of its space tourism rocket that seems to pull inspiration from two American powerhouses in the industry – Jeff Bezos’ Blue Origin and Elon Musk’s SpaceX

Space tourism was once an idea only seen in sci-fi films, but in the past year, three billionaires turned the adventure into a reality.

Virgin Galactic’s founder, Richard Branson, and the aforementioned Bezos have both ventured into suborbital space.

Although Musk has yet to take the journey himself, his firm recently sent four civilians into orbit last moth for a three-day trip around Earth.

Now China could be the next country to join the space tourism industry, withy its first crewed missing set in just two years. 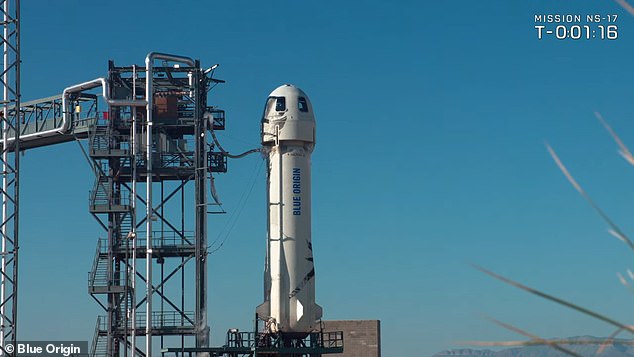 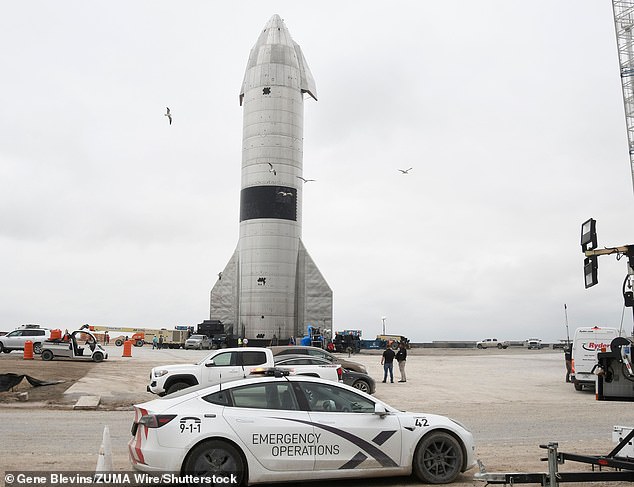 Much of the Chinese rock pulls inspiration from SpaceX’s  Starship, complete with side fins that guide the craft’s descent.

The rocket, which is set to be reusable, will undergo several tests leading up to its manned launch.

A suborbital demonstration is set for 2022, followed by an unmanned mission a year later and then the company’s suborbital tourism services could begin in 2024.

However, CAS Space’s timeline is very ambitious compared to the American companies that have already sent tourists into space.

Blue Origin launched its first demonstration in 2015 and did not send a human crew into orbit until earlier this year.

According to CAS Space, tourists will receive short-term training prior to launch, but the release did not go into further detail on what type of training they would receive. 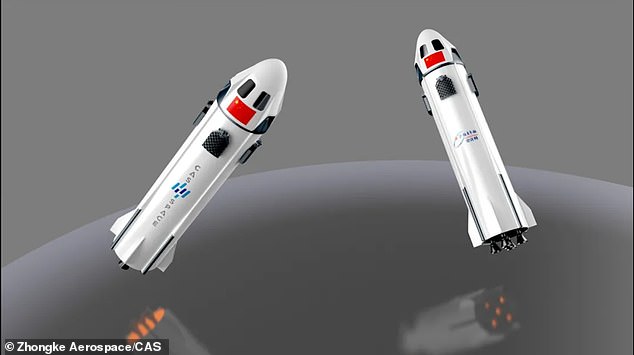 The Chinese rocket, which is set to be reusable, will undergo several tests leading up to its manned launch. A suborbital demonstration is set for 2022, followed by an unmanned mission a year later and then the company’s suborbital tourism services should begin in 2024

The team underwent centrifuge training to prepare for the various dynamic situations encountered during spaceflight — including launch, reentry, ocean splashdown, and a potential in-flight abort scenario.

Branson was the first billionaire to make it to space, when he and an entourage of six people traveled 53 miles above Earth’s surface on July 11 and spent eight minutes in weightlessness.

He and his brother Mark Bezos were joined by 18-year-old Oliver Daemen – the world’s first paying customer to buy his flight – and 82-year-old Wally Funk, who passed NASA’s space program in the 1960s but never made it to space because the women’s flight was canceled.

The crew traveled 66 miles above the surface of Earth – 13 miles higher than Virgin Galactic billionaire Branson.

Blue Origin is set to launch a second space tourism mission on October 12 and actor William Shatner, 90, will be aboard.

Shatner, who is known for his role as Captain Kirk on Star Trek, will become the oldest person in space.

Musk has purchased a ticket for Branson’s Virgin Galactic, and recently sent four civilians into the final frontier.