A male rat in China has given birth by Caesarean section after a ‘vile’ experiment that involved joining it to a female rat and transplanting a uterus.

The team, from the Naval Medical University in Shanghai, were inspired to see if an embryo could survive in a ‘male uterus’ by male seahorses who give birth.

They joined a male and female rat together by attaching their skin and sharing blood between the two halves of the new pairing, then transplanting a uterus into the male half and implanting embryos into both male and female rats.

The embryos were allowed to develop to term, that is 21.5 days, with ten successful pups out of 27 ‘normal’ embryos in the male delivered by Caesarean section.

Those surviving to term went on to live into adulthood and were able to reproduce, suffering no wider ill effects to heart, lung or liver, the team explained.

The study may have ‘a profound impact on reproductive biology,’ the team said, adding ‘a mammalian animal model of male pregnancy was constructed by us.’

They haven’t said what implication this would have for humans, but previous studies have explored the possibility of transplanting a uterus into transgender women. 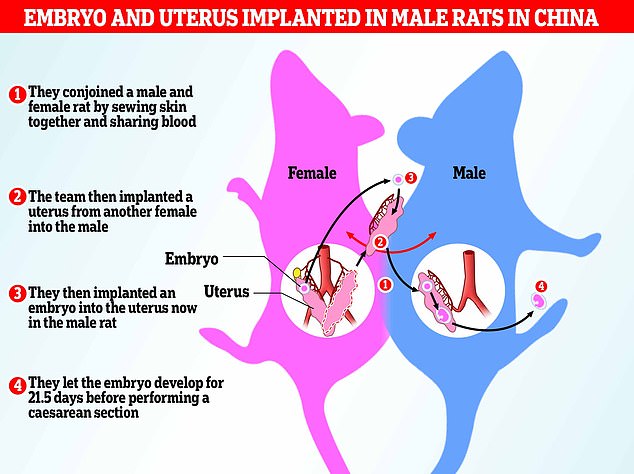 For the study they joined a male and female rat together by attaching their skin and sharing blood between the two halves of the new pairing, then transplanting a uterus into the male half and implanting embryos into both male and female rats 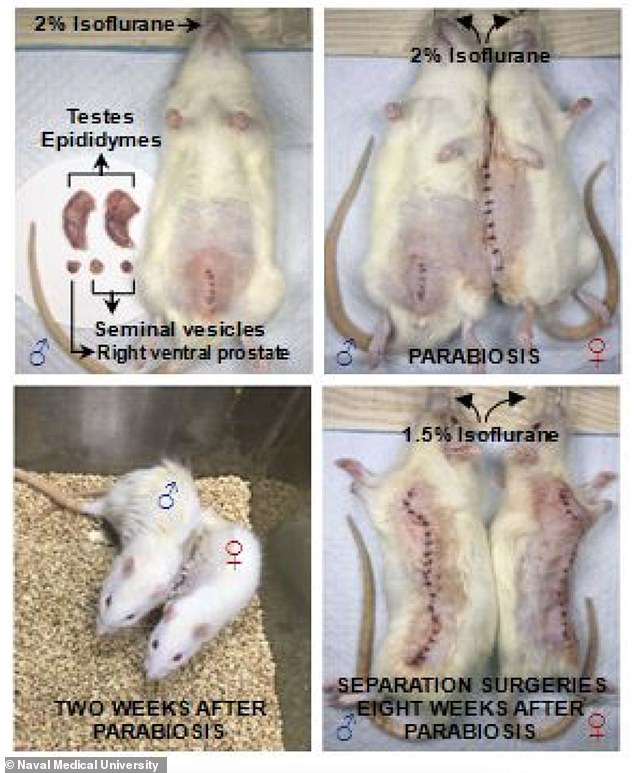 For the study they joined a male and female rat together by attaching their skin and sharing blood between the two halves of the new pairing, then transplanting a uterus into the male half and implanting embryos into both male and female rats

The researchers created what is known as a parabiotic pair, that is they conjoined a male and female rat.

This involved opening them up and attaching them together by their skin to create a single flow of blood.

They used inbred Lewis rats for the study as they were less likely to reject their shared blood.

Then, once the shared system was established, the researchers grafted a uterus into the male half of the pair.

They then implanted developing embryos into both the male and female halves, to ensure the female was pregnant.

This was so the ‘shared blood’ and system would be ‘pregnant blood’.

They found this was necessary for the embryos within the male uterus to develop to full term.

They were allowed to grow to term – or 21.5 days – and then both sets were delivered by Caesarean section.

They had 46 ‘pairs’ of rats and a total of 562 embryos were transferred to female halves and 280 to the males.

At term just ten pups survived after being delivered from the male uterus but they had no long term health issues.

Male pregnancy is an incredibly rare phenomenon in nature – so rare that syngnathidae, a family of fish which includes seahorses, pipefishes, and seadragons, being the only known species where males carry offspring in pregnancy.

The study builds on earlier experiments where mouse embryos were implanted into other parts of the male body – not a uterus – but they only develop for a short time.

So they designed a ‘rat model’ that removed these constraints, effectively stitching a male and female rat together to create a single conjoined entity.

Ms McIvor from Peta said: ‘Surgically joining two sensitive rats – who endured mutilation and weeks of prolonged suffering – is unethical and in the realm of Frankenscience.’

‘Rats have nervous systems just like those of humans,’ she said, adding that ‘they feel pain, fear, loneliness, and joy, just as humans do.’

The team used inbred Lewis rats, which have a 21 to 23 day gestation, with groups of female rats selected either for their uterus or to develop the initial embryo.

They transplanted the uterus from a female into the male rat, who had been previously castrated.

The team implanted embryos into the newly implanted uterus, as well as the native uterus of the female rat that was still joined to the male.

This allowed them to observe embryonic development in the grafted uterus of the male under pregnant blood exposure.

Implanting embryos in the uterus of the attached female rat worked as a test and also so the ones in the male could develop under the shared ‘pregnancy blood’.

In total they had 46 pairs of rats conjoined together with both sides made pregnant, and a total of 562 embryos were transferred to female halves and 280 to the males.

Effectively by implanting the embryo in the female half of the pairing as well as the male, it meant their newly shared blood was under female pregnant conditions.

‘Finally, we performed caesarean section if the male was pregnant,’ they explained.

While performing caesarean section on the males, they found some abnormal dead foetuses – a phenomenon not observed in those born to the attached female. 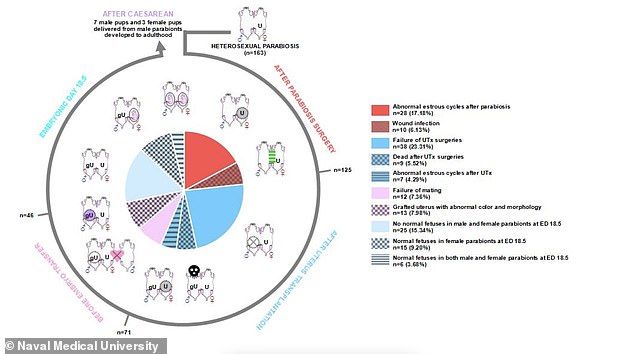 There were a number of conditions found within the hundreds of embryos implanted within the 46 pairs of rats, as well as health issues within the rat pairs themselves 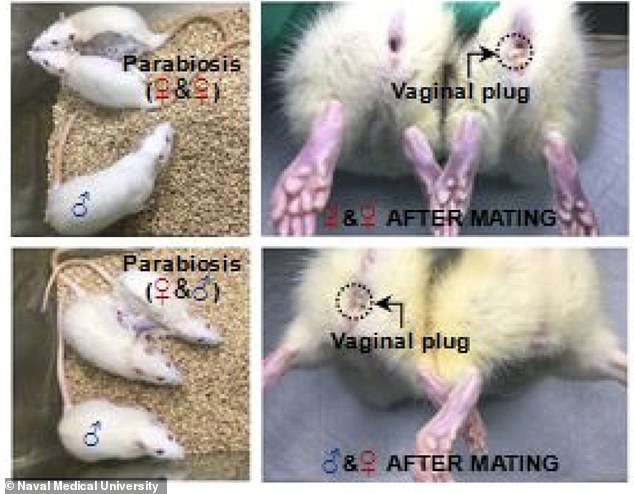 ‘These dead foetuses differed from normal foetuses in terms of morphology and colour; they were accompanied by atrophied or swollen placentas,’ the team said.

There were also surviving foetuses, some lasting just two hours and others more than a day, according to the researchers, who say that the body weight after two hours wasn’t significantly different to those born of the female.

The ten successful pups that were born of the male rat developed into adulthood and were ‘functionally reproductive, the team added.

These pups also had no obvious abnormalities in the heart, lung, liver, kidney, brain, testis, ovary or uterus, based on a histological examination. 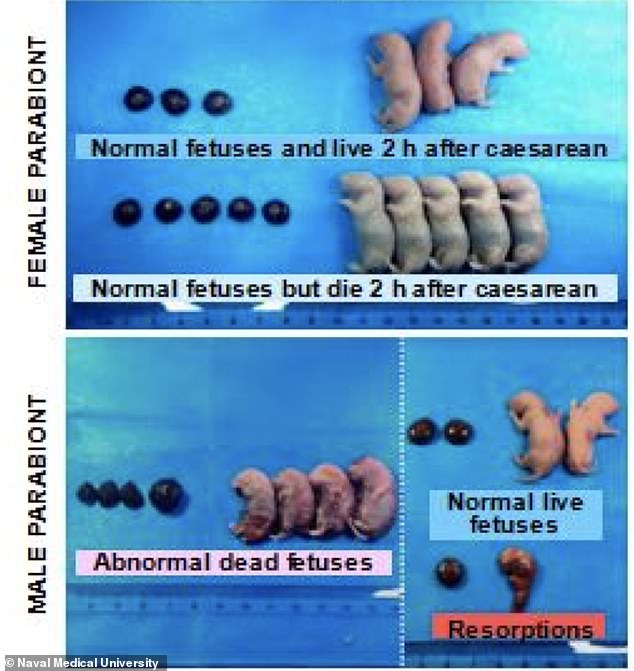 Some of the foetuses survived to term, others were reabsorbed into the uterus, those developing in the female uterus were much more successful, the team found

‘To our knowledge, pregnancy has never been reported in male mammalian animals,’ the authors wrote in their paper.

‘In this study, we constructed a rat model of pregnancy in the male and found that transplanted embryos were able to develop to adulthood in the grafted uteruses of males [conjoined to a female] during exposure to the blood of pregnant female.

‘The success rate of the entire experiment was very low, but 10 pups were successfully delivered from males  by caesarean section.’

However, to make it possible for a male with an implanted uterus to successfully develop and give birth to pups, they had to expose both the uterus and male to the blood and body of a pregnant female rat attached by their skin.

They designed a ‘rat model’ that removed these constraints, effectively stitching a male and female rat together to create a single conjoined entity

Speaking to MailOnline, Peta described the study as ‘vile’.

‘In this vile study, after being castrated and forcibly conjoined to a female rat, male rats were cut open and implanted with a uterus and embryos were inserted in them – all to establish if they could ‘successfully’ produce young,’ said McGiver of Peta.

‘These shocking experiments are driven solely by curiosity and do nothing to further our understanding of the human reproductive system.

‘Animals deserve to be respected and left in peace, not bred in laboratories, experimented on, and treated like disposable objects.’

The findings have been published in the biology pre-print server bioRxiv.org.

Scientists say human embryos could be grown in a test tube for FIVE WEEKS after mouse embryos developed a heart, head and beating heart in a jar in groundbreaking study

Human embryos could be the next test subjects of a groundbreaking study that kept mouse embryos alive outside of the womb that developed a heart, stomach, head and limbs in six days.

A team of Israeli scientists grew filled small jars with nutrients inside that were placed on rotating roller and pumped each with a pressurized oxygen mixture to simulate the natural process.

The embryos were able to grown in the artificial womb for up to 12 days and researchers say they plan to continue the work to grow human embryos to week five.

Although this study is deemed groundbreaking, the team understands attempting human trials would spark ethical debates due to the fact human embryos will be lost during the research.

Jacob Hanna, a developmental biologist at the Weizmann Institute of Science, who led the research team, told MIT’s Technology Review: ‘I do understand the difficulties. I understand. You are entering the domain of abortions.’

Hanna also highlights the embryos used in the study will be only five days old and collected from IVF clinics where they would ultimately be destroyed.