China’s stunning ‘blue tears’ plankton blooms are SPREADING: Satellite study reveals the phenomenon has grown in recent years – but scientists warn it can be toxic

Glowing blooms of ‘blue tears’ are taking over the coastal waters around China.

The tiny organisms, also known as sea sparkles, light up the East China Sea at night with an eerie blue glow, which occurs when they’re disturbed by movement in the water.

But, they’re also known to be toxic.

Satellite observations from 2000 to 2017 show the blooms extend farther from the shore and into warmer waters than expected, and appear to have become more abundant in the past few years. 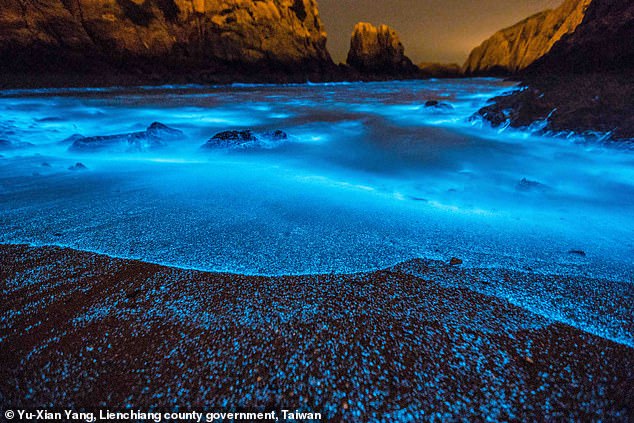 Glowing blooms of ‘blue tears’ are taking over the coastal waters around China. The first-ever satellite study of breathtaking bioluminescent plankton called red Noctiluca scintillans has revealed that outbreaks have grown in recent years

According to the new research led by a team in China, the growth in recent years may have to do with the construction of the controversial Three Gorges Dam, which wrapped up in the early 2000s.

Thanks to the plankton’s ability to absorb and scatter light, scientists were able to track their activity through satellite images by analyzing changes in the ocean’s color.

By analyzing nearly 1,000 images of the East China Sea from NASA’s Terra and Aqua satellites, as well as the International Space Station, the teams identified blooms that emerged between April and August over the course of 18 years.

While they typically appear close to the shore near the mouths of rivers, the satellite images revealed many located farther out.

They also found blooms in waters that were warmer than their typical range of around 20 to 25 degrees Celsius (68 to 77 degrees Fahrenheit). 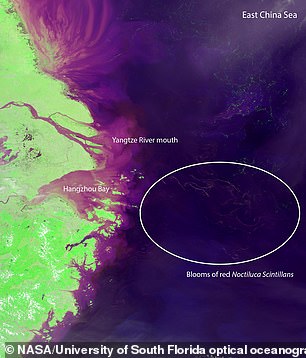 In some cases, blooms were seen in waters as warm as 28 degrees Celsius (82 degrees Fahrenheit).

Despite annual variations, the researchers say the blooms increased in recent years – and, this may indicate a growing trend.

This may be linked to the Three Gorges Dam, which generates about as much energy as 12 nuclear reactors, the study notes.

Excess nutrients from fertilizer spilling into the sea may also contribute to the growth.

According to the team, the new study could help inform the best viewing opportunities to see the famous ‘blue tears.’

And, it could let tourists know when to stay away.

The researchers say the method could be used to track harmful red tides in the area.

WHAT ARE THE HEALTH RISKS OF ALGAE BLOOMS?

Technically called cyanobacteria, the ancient class of organisms that create the blooms are present nearly everywhere water is found, but thrive in warm, still bodies like lakes and ponds.

They also create a unique class of toxins, the impact of which on humans is only partly understood.

Long linked to animal deaths, high doses of the toxins in humans can cause liver damage and attack the nervous system.

In the largest outbreaks, hundreds have been sickened by blooms in reservoirs and lakes, and officials in some areas now routinely close bodies of water used for recreation and post warnings when blooms occur.

But less is known about exposure at lower doses, especially over the long term.

Small studies have linked exposure to liver cancer – one toxin is classified as a carcinogen, and others have pointed to potential links to neurodegenerative disease.